“The government currently uses intensive ground sensor tasking to monitor conditions in orbit. This is costly and takes time away from other work. My aim is to use data we’re already collecting on orbital debris instead. This would open up a huge new data source because there are so many debris objects,” said Mutschler, an aerospace engineering PhD student and Smead Scholar at the University of Colorado Boulder working under Professor Penina Axelrad.

At issue is the sun – the source of most space weather. In addition to lighting and heating Earth, the sun also puts out significant amounts of radiation and particle emissions that can dramatically alter our planet’s upper atmosphere and magnetosphere. Those alterations interfere with and sometimes damage near-Earth and ground-based systems such as satellites and power grids, which is why monitoring is so important.

Instead of expensive sensor time, Mutschler wants to use data from what is typically an orbital nuisance: space junk. There are tens-of-thousands of pieces of space debris currently orbiting Earth – items that range from spent booster rockets, to pieces of derelict satellites to tools dropped by astronauts while on space walks.

NASA and the U.S. Air Force maintain databases of space debris with one goal in mind: to stay out of the way. Objects in orbit around Earth travel at some 27,000 kph (17,000 mph). If they hit anything, there is a risk of catastrophic destruction, like that envisioned in the 2013 film Gravity, where debris from a derelict satellite spins out of control, crashing into other satellites and creating a cascade of damage around Earth.

Mutschler would harness the debris databases to monitor the speed of orbiting objects, which can change when solar emissions increase the density of molecules in the Earth’s magnetosphere, causing additional drag.

Atmospheric density varies naturally as objects orbit the Earth, leading to some normal variances in orbital speed, which makes the debris catalog so useful. It could provide a global average picture, smoothing out those natural variations to expose unique space weather conditions.

“The metaphor I like to use is how Google Maps uses data on where cars are and how fast they're moving to identify traffic problems. My algorithm uses a similar approach, only we're doing it in space,” Mutschler said.

The database is uniquely suited for this task because there so many objects monitored by it. In addition, many of those objects have high area to mass ratios, which makes them particularly sensitive to drag from space weather.

“There a lot of debris objects for which we already collect data for space object catalogue maintenance, but this data isn't used for anything else. So, why not put this data to work and use it for good, to help us track space weather in near real time,” Mutschler said.

In addition to expanding our understanding of space weather, Mutschler’s idea could also help extend the life of satellites. Currently, when debris from the database enters the orbital path of a functioning satellite, its owner is contacted so the satellite can be maneuvered away from the object.

“In low-Earth orbit, it’s the largest contributor to prediction error. We don’t always know whether to tell operators to move a satellite or not,” Mutschler said.

They often err on the side of caution and move the satellite, because replacing a damaged satellite can take years and cost hundreds of millions or even billions of dollars. However, the maneuvering has a price of its own: satellites have limited fuel, and when their tanks run dry, there are no orbiting gas stations at which to fill up.

“If we can build better prediction models, we can reduce unnecessary movement and extend the life of satellites,” Mutschler said.

A thesis in three minutes or less 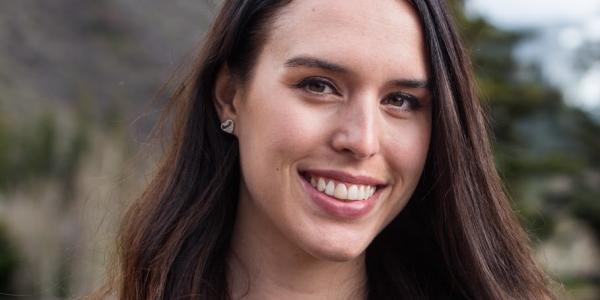 Shaylah Mutschler is preparing to take on a feat attempted by few graduate students: publicly explain complicated science and engineering research in three minutes or less.

Mutschler is a finalist in the CU Boulder 2020 Three Minute Thesis competition.

The annual event is an academic tournament to cultivate student presentation and communication skills.

Public speeches can be intimidating on any subject, much less advanced research that typically spans hundreds of pages in a dissertation.

“The foundation of a lot of engineering research is quite complex in itself. In order to talk about your research, you have to build blocks underneath before you can even tell someone what you're actually doing,” Mutschler said.

3MT originated at the University of Queensland in Australia. This is its third year at CU Boulder. Mutschler signed up, intrigued by the challenge, and seeing it as a way to hone her presentation skills for an even bigger stage: a TED Talk.

“One of my dreams is to give a TED Talk. You have to have a really refined message that people want to hear to get there. Three Minute Thesis provides workshops to help you figure out your story, how you can tell it, presentation skills, even improv,” Mutschler said.

Mutschler said the workshops have helped her polish what she needs to say and what she can leave out to develop the best talk possible.

Mutschler is one of 10 university finalists. Two other engineering students, Maria Calahorra-Jimenez and Jason Zhang, also are competing. The public competition is set for Friday, Jan. 31, from 3-5 p.m. in the UMC Glenn Miller Ballroom. Admission is free.

The winner will receive $1,500 in research funds and the opportunity to represent CU Boulder at the Western Association of Graduate Schools Three Minute Thesis competition in March.