“Inertial+, the Once and Future Navigation System” 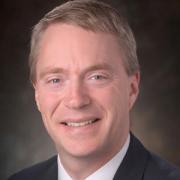 Abstract: Since their invention shortly after World War II, inertial navigation systems have proven to be indispensable in the aerospace industry.  They are immune to jamming and provide position, velocity and attitude with low noise, high data rates and low data latencies.  Since the 1960s, the long-term drift inherent in any inertial system has typically been corrected through the integration of an external aiding source via an extended Kalman filter.  Aiding sources have varied over the decades and, although GNSS is currently the most popular choice, the future of navigation can be characterized simply as “inertial-plus.”  Plus what?  Whatever the best aiding source happens to be.  Vision? Electro-optics?  LADAR?  Signals-of-opportunity?  Maybe all of the above.

In this presentation we will review the key operating principles of inertial navigation and will highlight the major error characteristics.  The primary inertial-aiding design architectures will then be discussed along with important features such as state-observability.  Finally, recent research in the area of gravity model error characterization in high-integrity aided-inertial systems will be presented.

Bio: Michael Braasch holds the Thomas Professorship in the Ohio University School of Electrical Engineering and Computer Science and is a Principal Investigator with the Ohio University Avionics Engineering Center.  He has been performing navigation system research since 1985 and has served as a technical advisor both to the U.S. FAA and the International Civil Aviation Organization (ICAO).  Mike is internationally recognized for his work in characterizing the effects of GPS multipath and has performed fundamental research in the use of phased arrays for differential GPS ground reference stations.

In addition, his research in the application of phased-array techniques to differential GPS ground reference stations laid the foundation for the development of the first generation prototype antennas for the FAA’s Ground-Based Augmentation System (GBAS).

In the mid 1990s, Mike led the Ohio University research group that pioneered the GPS software-defined receiver. He has also conducted research in the design, development and flight-testing of peripheral vision display systems for general aviation aircraft. He is the associate editor for navigation for the IEEE AESS SYSTEMS magazine, and since 2017 has served as the founding Chair of the AESS Navigation Systems Panel.

Learn about research being done by Smead Aerospace students and faculty through 10-minute talks.