How does it work? In short, NSF brings together a group of 20-30 researchers who typically do not know each other and essentially puts them in a room for a week with the directive to work as a group to take on a big science or engineering problem.

In Neogi’s case, there was a prompt to work on computing issues tied to “Harnessing the Data Revolution.”

By the last day of the workshop, attendees were expected to have a general research plan and funding proposal to submit to NSF.

The concept of Ideas Lab originated in England, where the Engineering and Physical Sciences Research Council (EPSRC), a British equivalent of the United States-based NSF, sent out a standard request for research funding proposals.

They felt the responses were not ambitious enough, and developed what they called a “Sandpit” workshop in response.

The goal is that by bringing researchers from diverse subject areas together, they will share ideas, interact and argue, and think of new solutions to problems no one researcher would come up with on their own. 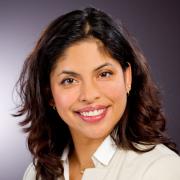 Sanghamitra Neogi is part of a team seeking nothing less than a revolutionary leap forward in computing technology by making computers work more like the human brain.

The National Science Foundation thinks they may be onto something and has awarded a two-year, $1.7 million "Ideas Lab" grant to further the research.

Investigations into so-called neuromorphic materials have long been a target of scientists and engineers. The brain is essentially the fastest, most resilient computer ever made, and it has a near limitless capacity.

But it operates on entirely different principles than silicon computer chips. First and foremost, computers are electronic, while neurons in the brain are chemically activated. In addition, computer chips typically have assigned roles, and one component may not interact with another component at all, while the brain is a giant interconnected system.

“Computer chips on a circuit board don't directly communicate with each other the way neurons in the brain do,” said Neogi, an assistant professor in the Ann and H.J. Smead Department of Aerospace Engineering Sciences at the University of Colorado Boulder.

Neogi is focused on phonons, which exist in all solid and liquid materials. They are quantum particles – incredibly small – carrying heat or vibration. Controlling phonons, especially high-frequency (1012/seconds) phonons, is still a relatively new research area, with most work focusing on using them to better manage heat in electronic or thermoelectric devices.

Where does this get back to the human brain? While computer chips may not directly communicate with each other, both neurons and phonons do.

The question is if they are similar enough that phonons could be used like neurons: to store and process information.

Preliminary work suggests they can. To further the research, the team is composed of an interdisciplinary group of scientists and engineers working in the fields of materials, data science, neurology, chemistry, physics, and biological engineering at five institutions: CU Boulder, Johns Hopkins University, Massachusetts Institute of Technology, Ohio State University and the University of California San Diego.

The grant officially begins on October 1. Working with Neogi at CU Boulder are aerospace PhD student Morgan Henderson and Kyle Li, an undergraduate in engineering plus and applied math.

Key ideas behind this research were initiated during Neogi’s prior work on a $1 million DARPA grant to investigate phonon and electron properties of heterogenerous semiconductor architectures.

One tricky question is the interconnection of neurons. MRI scans of humans show that when we think of a memory, large areas of the brain light up, meaning many neurons are activating as a group. For the team to be successful, phonons will need to function the same way.

However, the incredible complexity of the brain has led most researchers to focus on individual neurons. For this project, the team has to do that and also map the collective dynamics of entire networks of neurons.

“What we want to do, and this is kind of crazy, is not look at one neuron, but look at millions or the entire brain,” Neogi said.

It is the type of issue the NSF Ideas Lab program is focused on: big risk, big reward problems. Scientists and engineers are increasingly approaching the upper limit of computing speeds with currently available technology architectures. This research could change that equation and lead to significantly faster processors and storage possibilities.

“One of NSF’s 10 big ideas is harnessing the data revolution,” Neogi said. “This project maximizes our opportunities for disruptive new computing and data science concepts.”