Stroke by stroke, two large murals are adding an eruption of color and expression to the new Aerospace Engineering Sciences Building at the University of Colorado Boulder.

The Ann and H.J. Smead Department of Aerospace Engineering Sciences commissioned two major art pieces for the interior walls of the building. The first, a jaw-dropping two-story-high display just inside the main entrance, is being crafted by Colorado artist Trine Bumiller. The second painting, located on the third floor of the building, is being done by a CU Boulder student, Ellie Marcotte, an art practices senior.

The first-floor painting, entitled River of Stars, is hard to miss. At 33 feet high and 22 feet wide, it dominates the lobby of the building. The painting shows the Boulder Flatirons below a massive star field and representation of the Milky Way galaxy. It also incorporates a supersonic plane, a space capsule re-entering the atmosphere, and a special buffalo constellation.

“The theme of the painting is connections -- between earth, sky and the universe to the past, present and future,” said Bumiller.

A professional artist, Bumiller has had installations featured up and down the Front Range, including a series of linked murals at the Colorado Convention Center and an ongoing exhibition of paintings of Wyoming’s Devils Tower at Art Gym Denver called Close Encounters. She also recently wrapped up a six-month installation of Colorado glacier paintings at the CU Boulder Art Museum.

River of Stars is her largest single mural to date.

“I'm really happy with it. I was a little apprehensive at first, as anyone would be with something this size, but I realized it's just a painting, a big painting,” Bumiller said.

For the past few weeks, curious onlookers have watched as Bumiller roughed in outlines and then begin painting the wall – reaching the higher areas on a large, electric scissor lift.

“I'm not afraid of heights. If I was, it would be a problem. The lift sways when it's extended the full 33 feet, but it's been really fun,” Bumiller said.

The painting incorporates a structural element of the building – a series of exposed steel support beams, which sit just in front of the mural and divide it into six sections. It elicits comparisons to peering at the night sky through the cupola windows on the International Space Station.

“I want it to look like you're looking out a window of a space station or a huge building,” Bumiller said. “The aerospace building will also mostly be used during the day, and I thought it would be cool to have a night view with the stars.” 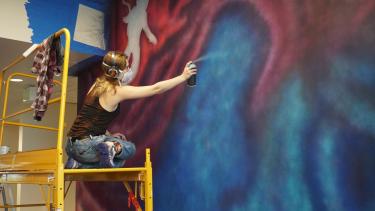 Despite the large scale of the mural, Bumiller has worked almost entirely using just a 2-inch paint brush – her chosen tool of the trade. Meanwhile, on the third floor of the aerospace building, Marcotte has been utilizing an entirely different tool: spray paint.

Her mural depicts a space-walking astronaut gazing at a colorful representation of a nebula and interstellar space. At 11 feet high and 16 feet wide, it’s comparatively reasonable in size.

She is drawing the astronaut in marker and paint pens, but relying on spray paint to capture the flowing elegance of the nebula.

“The image I'm using has organic, soft edges. It's hard to get that with a paintbrush,” Marcotte said. “The spray paint also gives an urban look that goes well with space.”

Marcotte’s mural exudes the sense of pure exploration and awe of space travel. 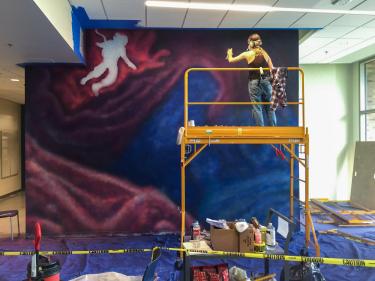 “I want people to feel a love for space or to reignite their love for space,” she said. “When the original call for artists went out, the prompt mentioned emphasizing technology, but I’ve seen how technology changes. In 10 years, no one will remember what old tech looks like, so I asked myself, ‘What’s the point of space travel?’ It’s exploration.”

In submitting a design as a student, Marcotte was initially unsure of her chances for success.

“When I found out I was selected, I thought, ‘Is this a joke email?’” Marcotte said. “I’m super excited to be working on this project.”

While still early in her career, Marcotte has exhibited work professionally in the Denver metro and has done commissioned pieces, including conceptualized drone designs for DJI.

Both murals were selected through a public request for proposals process led by a special art committee made up of Smead Aerospace and the CU Boulder NEST Studio for the Arts.

Bumiller and Marcotte each expect to wrap up work on their murals within the next week. 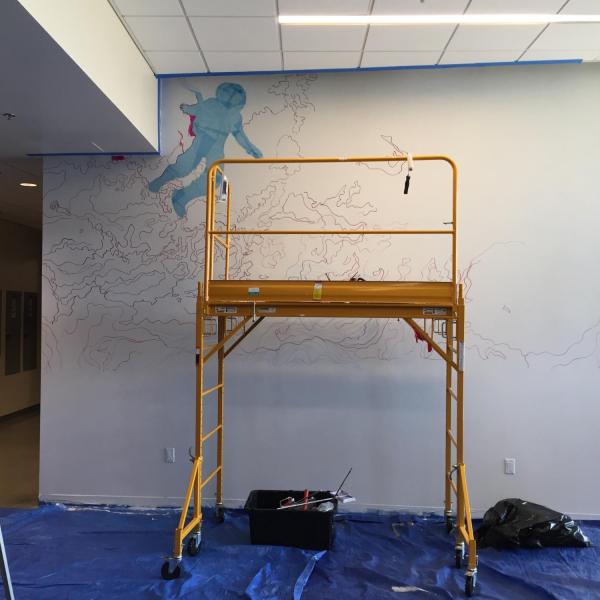 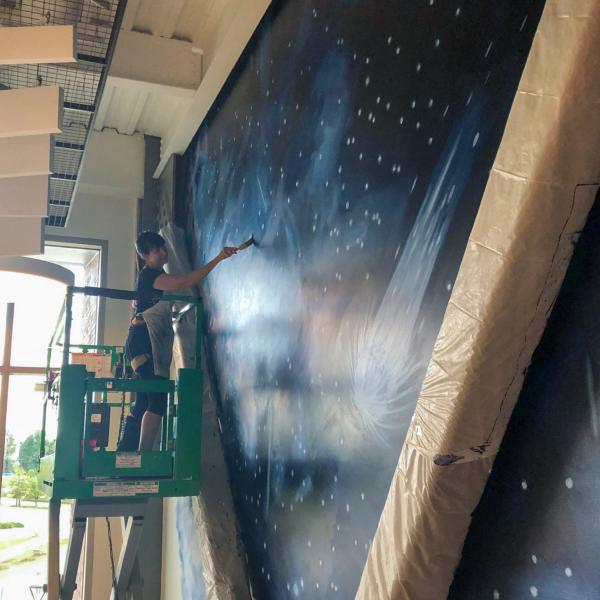 Bumiller at work high on the scissor lift. 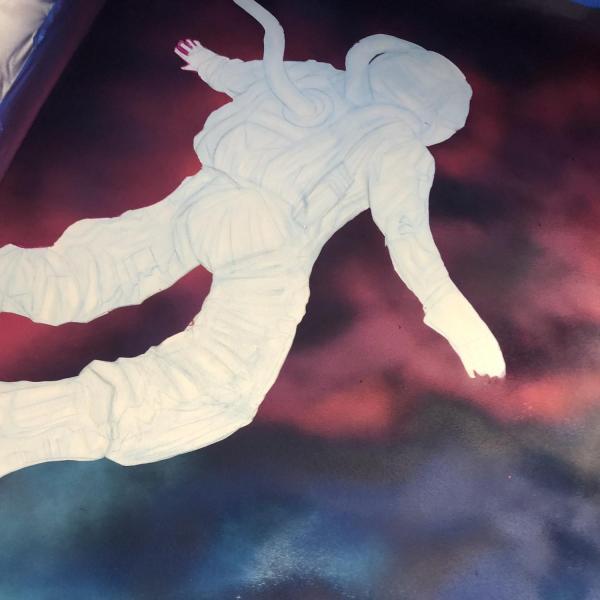 Close up of the roughed in astronaut on Marcotte's mural. 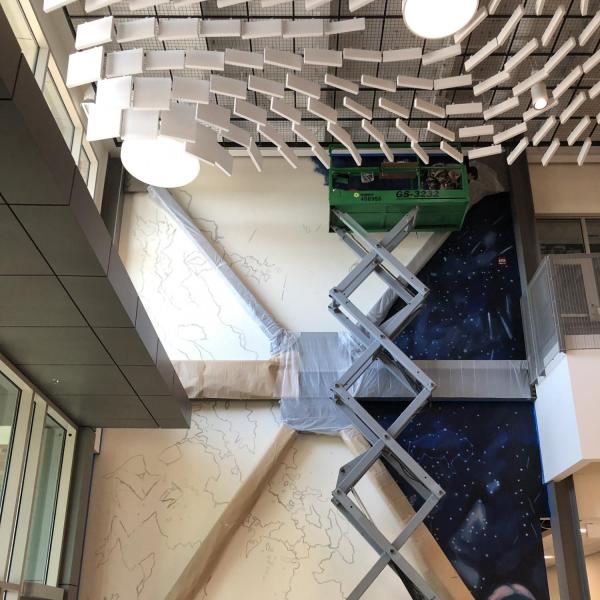 A look at Bumiller's mural early in the process. 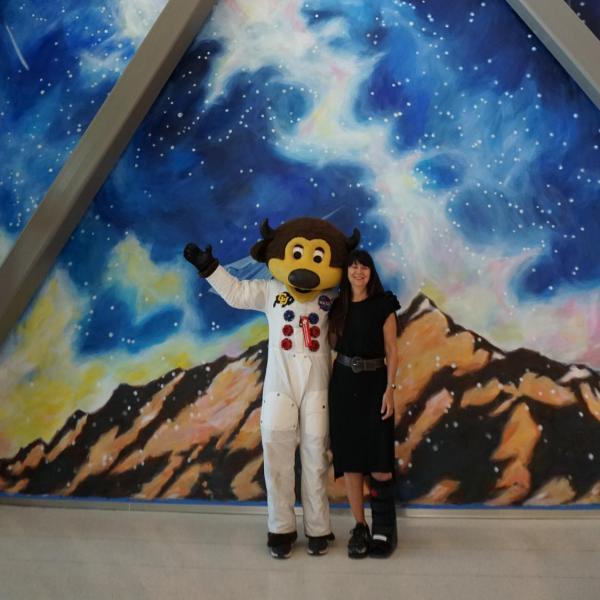 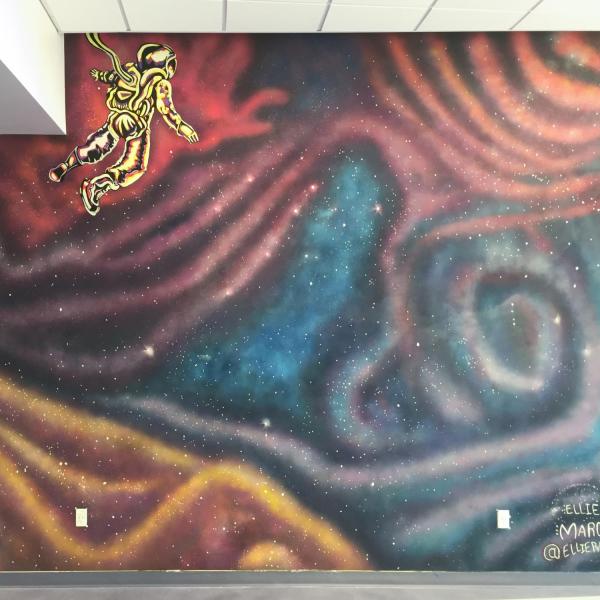 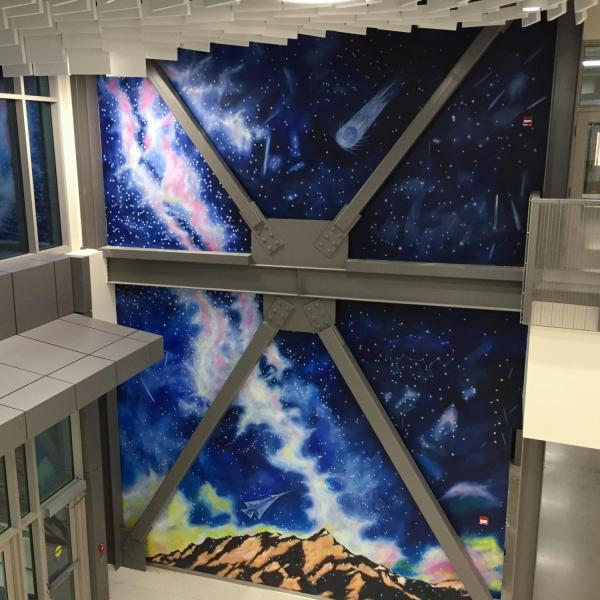