Interning at Blue Origin as a Matthew Isakowitz Fellow

Interning at Blue Origin as a Matthew Isakowitz Fellow

The Matthew Isakowitz Fellowship Program is an internship and mentorship program that offers college juniors, seniors, and graduate students the opportunity to work and engage with leaders in the commercial aerospace industry. The program was created in honor of Matthew Isakowitz, an incredibly passionate young engineer, entrepreneur, and advocate for commercial space, and seeks to instill that same enthusiasm in its fellows.

I applied for the fellowship in November of 2018, after hearing about a friend’s experience as a part of the inaugural class. As someone who knew very little about the history of the commercial aerospace world, I had recently started to notice just how exciting and diverse an industry it had become. MIFP seemed like the perfect opportunity to get a feel for how it differed from ‘traditional’ aerospace and gain valuable internship experience.

After applying and getting accepted, I was able to rank three of the host companies I was interested in working at for the summer. The MIFP team does an amazing job taking your desires into account when ranking companies for internships – do you like a small, fast company? Larger and more diverse? Does location matter? Granted, you still need to interview with each company you choose, but the program facilitates that discussion and allows you to get a foot in the door.  I was lucky enough to interview and receive an offer from my top choice – Blue Origin, Jeff Bezos’s space venture based in Kent, Washington. 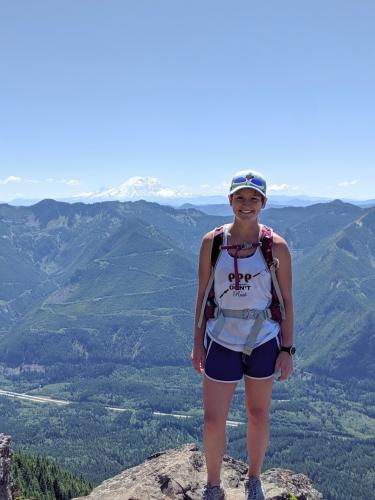 I started my internship with Blue Origin at the end of May as part of the guidance, navigation, and control team for their new launch vehicle: the massive New Glenn rocket.  The company is moving fast – although publicly they prefer to stay relatively quiet - and they encourage interns to reach out to different project groups or engineers who do work that you want to hear more about. In my spare time on weekends or after work, I got to enjoy the beauty of the Pacific Northwest during hikes, and explore downtown Seattle with friends.

The fellows – there were 25 of us in the 2019 class – were scattered across the country, with a majority based in the bustling aerospace community around Los Angeles. We kept in touch through the spring and summer through a group chat, which was constantly bubbling with excitement and pictures from current events like Jeff Bezos’s Blue Moon lander announcement, the JAXA Hayabusa-2 landing, or SpaceX’s Starlink launch.

The second key aspect to the fellowship is the industry mentor. I was matched with Mark Sirangelo, previous head of Sierra Nevada, who had recently arrived at CU Boulder as an entrepreneur-in-residence. We were able to meet up in the spring, and I heard his story about how he ended up starting multiple companies within the aerospace sector.

Who is the founder of SpaceX?” Of course, we all knew the answer – Elon Musk. Steve Isakowitz quickly followed up that question with another: “Do you want to meet him? 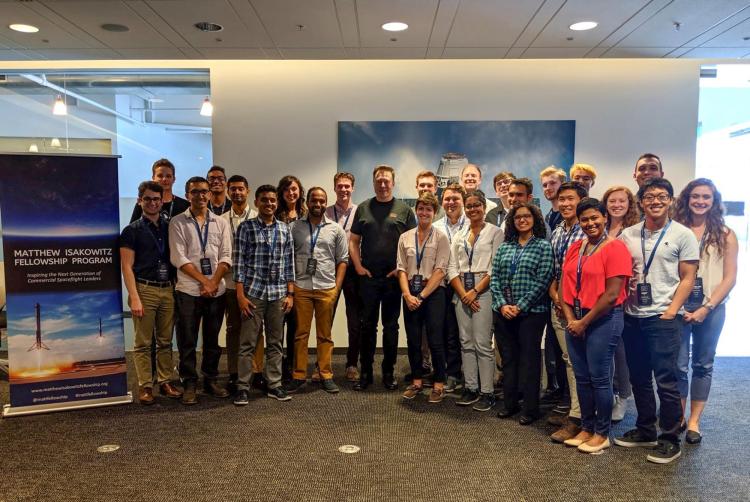 At the end of July, the fellowship culminated in a jam-packed networking summit in Manhattan Beach, California. After flying in on Wednesday, I was finally able to put faces to the names I had seen alongside my own on the fellowship announcement. We got dinner together that first night and were introduced to the Isakowitz family – truly the driving force behind this wonderful opportunity. Meanwhile, we were also sorted into six groups in order to prepare for “the Great Space Debate” – a fun challenge that would be going down that Friday, on topics ranging from the commercialization of Low Earth Orbit, to whether or not Elon Musk or Jeff Bezos has a better long term plan.

On Thursday, we woke up early to begin our tours of local aerospace companies. The first stop was Virgin Orbit, a low-cost airplane-launched rocket service founded by Sir Richard Branson. The company recently had a successful drop test of their rocket off of the wing of their 747, affectionately named Cosmic Girl. We learned about the company culture and got to see all of the machinery and parts down on the factory floor.

The next stop was Boeing’s satellite integration center, but first we had a round of trivia on the bus. The trivia up until then had been relatively niche facts about the intricacies of lesser-known space companies, but this first question took us by surprise: “Who is the founder of SpaceX?” Of course, we all knew the answer – Elon Musk. Steve Isakowitz quickly followed up that question with another: “Do you want to meet him?”

We were a bit floored by that. After a few moments of quiet disbelief, the bus errupted into excited giggling.

The bus diverted off to SpaceX’s Hawthorne facility, where we were shepherded into a conference room to await our meeting with Mr. Musk. We prepared a few questions, trying to be as efficient as possible with our limited time, and when he entered the room we were not disappointed. We had a great discussion and left feeling inspired and determined.

At Boeing, we saw the large-scale satellite test site – everything from vibration tables to anechoic and thermal vaccum chambers. At each company, including Boeing, we got to interact with a panel of employees who spoke about their own experience in commercial space.

That night, we had the privelage of a formal networking dinner at the hotel, where we had the chance to talk with CEOs and managers across over a dozen companies. We also had the chance to meet the guest of honor – Buzz Aldrin, fresh off the 50th anniversary off the moon landing, who left us starstruck. John Gedmark and Brett Alexander, the CEO of Astranis and the VP of Blue Origin respectively, delivered the keynote address and spoke about their friendship with Matthew. 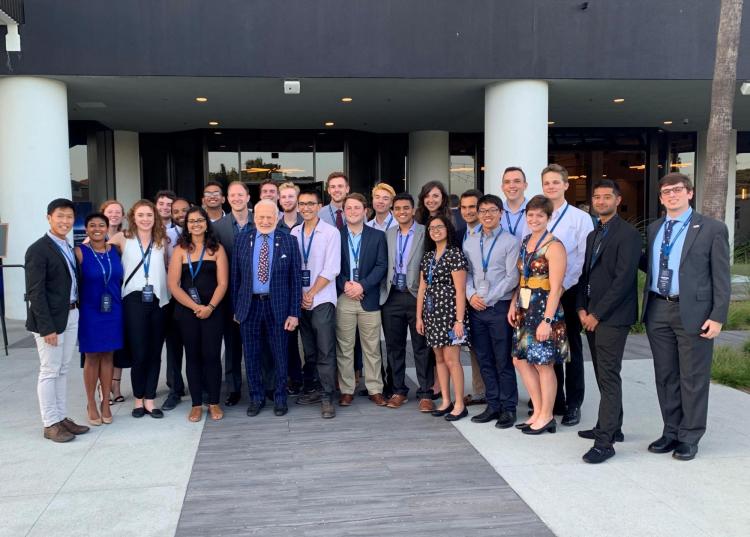 riday was another early rise. We shuttled off to SpaceX once again, this time for a tour of the factor floor led by the SpaceX VP, Lee Rosen. We were able to see just how bustling the ground floor was – employees were busy fabricating new Falcon 9s, refurbishing the recovered fairings, and machining parts for their Dragon capsules. After that it was off to the Aerospace Company, with a tour led by the CEO himself, Steve Isakowitz. He had rangled a squad of engineers and scientists to give us rundowns on fascinating projects underway across the company.

The Great Space Debate went down that afternoon in an Aerospace Corp. conference room, moderated by industry experts and entrepenuers. Although the debate was filled with passionate speeches, with both sides declaring their convictions and taking shots at the opposition, it was also punctuated by laughter and friendly quips from the fellows in the crowd.

Friday night culminated in a last dinner with the fellows and the Isakowitz family, where we were able to give feedback and discuss our experiences. Afterwards, we were joined by the program’s alumni for dessert, and together we stayed up late into the night around a bonfire. The night with new friends laughing, telling stories, and sharing our passion for space.

Applications for the 2020 Matthew Isakowitz Fellowship Program open in September. Find out more at their website.