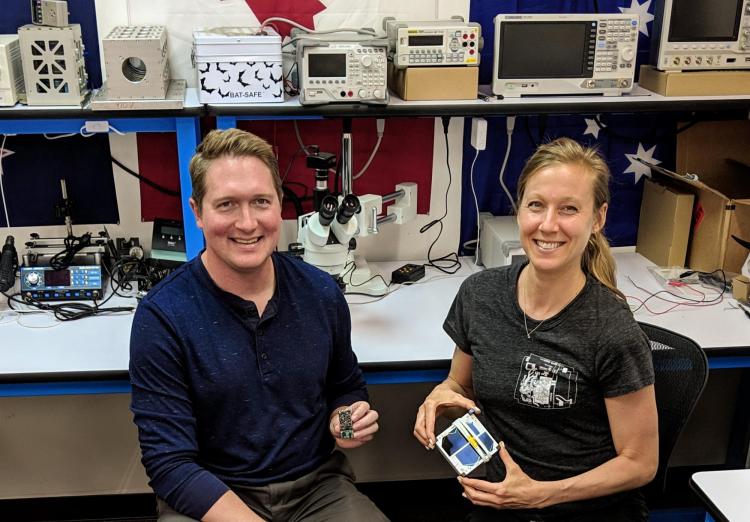 Abstract: Ubiquitous and affordable data coverage everywhere on the planet does not exist today. Only 10% of the globe is covered by cellular infrastructure and existing satellite solutions are prohibitively expensive for many applications. Motivated to solve for global, affordable connectivity, Swarm Technologies has developed the world’s smallest communications satellites, which are an order of magnitude smaller than conventional 3U CubeSats. We deployed 7 satellites into Low Earth Orbit in 2018, and plan to deploy 150 in the next 18 months to achieve global, continuous coverage. Our satellites have novel design features, including a passive attitude control scheme, passive orbital spreading scheme, and radar reflector technology for passive tracking. Our innovative satellite design, rapid design/test cycles, and low prices means we can bring millions of devices around the world online that couldn’t previously afford satellite communication. Swarm can support sending diagnostic and emergency messages from connected vehicles, track shipping containers, and enable crew communications across oceans. Swarm is partnering with global development companies and is working towards connecting people through text messaging in rural and remote areas.

Sara Spangelo completed a Master’s and PhD in aerospace engineering at the University of Michigan, and worked on CubeSat and UAV missions. She worked at JPL as a lead systems engineer for small satellite to Discovery-class mission concepts, and at Google X leading safety for Project Wing and proposing/leading a project in the Rapid Evaluation group.  She made it to the top 32 candidates in the 2017 Canadian astronaut recruitment campaign.  She is currently the CEO and Co-founder of Swarm Technologies.

Benjamin Longmier was previously the Founder and CEO of Aether Industries (acquired by Apple in 2015). While at Apple, Ben led an Aerospace R&D effort for several company objectives. Prior to Apple, Ben was a tenure track Assistant Professor of Aerospace Engineering at the University of Michigan. Ben holds a PhD in Engineering Physics from the University of Wisconsin-Madison and worked as a Postdoctoral Fellow at NASA-JSC. He is currently the CTO and Co-founder of Swarm Technologies.