From there to here: a nontraditional path to an aerospace career 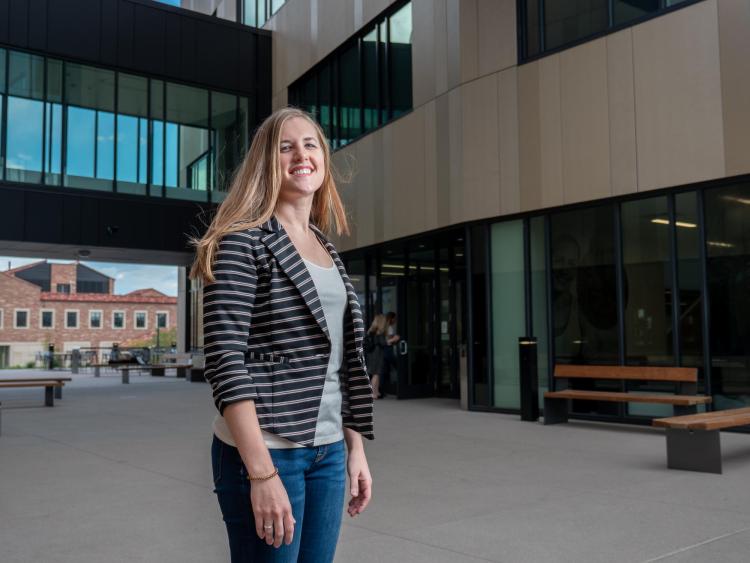 Kristyn Sample struggled to find her place after high school. The Columbia, Missouri native was getting by working waitressing jobs around Kansas City, but knew she wanted more.

Now 27, Sample has graduated from the University of Colorado Boulder as an aerospace engineer, is newly married, has left a legacy on campus through the initiatives she launched, and is looking at a bright future in industry.

How did she get from there to here? It started with a metaphorical kick from her roommate, whom she also refers to as “Dad.”

“I was moping around the house one day and Dad said, ‘Get yourself cleaned up, go to the community college and don't come home until you're enrolled in classes.’ It’s one of his favorite stories to tell people,” Sample admits.

Sample’s original post-high school plan had been to attend the Air Force Academy. However, despite a recommendation letter from her member of Congress, her application was unsuccessful. She instead joined the Air Force Reserve, hoping it could lead to an Academy slot, but eventually decided against pursuing full time enlistment.

She was interested in aerospace but undecided about her future. The push from her dad got Sample thinking again. She enrolled in courses at the local campus of Metropolitan Community College, and after a few semesters had completed all of the math and science classes they offered.

She next set her sights on transferring to a college that offered a four-year degree in aerospace engineering. Sample was accepted at both CU Boulder and Embry-Riddle Aeronautical University and decided to come to Colorado.

Once on campus, she discovered a problem which impacted hundreds of students like her each year: a lack of community for fellow non-traditional students. Fixing that became a new passion.

“There wasn’t really much support for transfer students,” Sample said. “All of the new student welcome and orientation sessions are for new freshmen and transfer students were an afterthought.”

Sample began pulling together resources for students like her and even started a campus Non-Traditional Student Organization.

“We have different motivations for being in college. We’re past our party phase and many transfer students are here to support families,” Sample said.

Her push to do more caught the attention of CU Boulder administrators, who have worked to change things for the better. The provost’s office even asked Sample to sit on a formal panel looking at issues facing transfer and nontraditional students.

“It’s being bolstered all over campus. It was slow going at first, but it’s exciting,” she said.

Sample also began a campus chapter of Tau Sigma, a national honor society for transfer students. Her efforts with the organization only recently came to fruition, with 18 students being inducted. As new graduate, Sample has left campus just as they get underway. 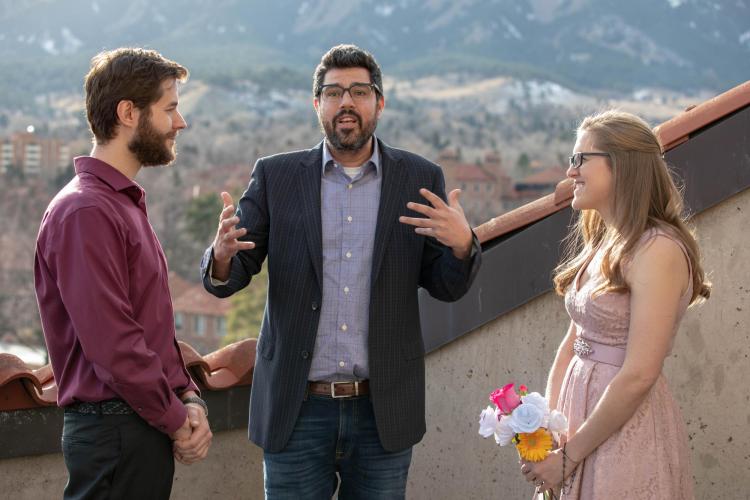 “I realized there was a need for it. There were times I wondered why I was doing it, but I can see the students it’s impacted already. It opens up scholarship, career development, and leadership opportunities for them,” she said.

Now that she has created so many opportunities for others, Sample has her own future to consider. She and her now-husband, Phil Velazquez, held a one-of-a-kind wedding ceremony December 17, on campus in the Engineering Center. The location may be unusual, but it carries a special meaning to the couple.

Sample and Velazquez met as community college students in Kansas City, where they started dating. When she enrolled at CU Boulder, he followed a year later, entering the mechanical engineering program. Their relationship began on a college campus, and enters its next chapter on a college campus as well.

“It just seemed really fitting,” Sample said. “We took finals on Saturday and Sunday and got married Monday on the seventh-floor balcony overlooking the Flatirons.”

As Sample considers job prospects, she seeks to make her engineering impact on projects that reach beyond Earth’s atmosphere and into space. She has had in-person or phone interviews with numerous aerospace and defense firms.

“In my senior year of high school when they phased out the Space Shuttle, I realized we didn’t have a backup plan to explore space,” Sample said. “I want to contribute to the fantastic work companies are doing to change that.” Sample and Velazquez at graduation.