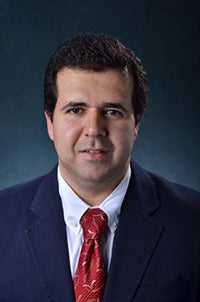 Mahmoud Hussein has been named a Fellow of the American Society of Mechanical Engineers (ASME).

The distinction is awarded to engineers for outstanding achievements and contributions, and has been bestowed upon only 2% of ASME’s 130,000 members.

Hussein, who is an associate professor and Smead Faculty Fellow, is being recognized for his research on wave propagation in phononic materials/structures and nonlinear wave theory, as well as his leadership in the emerging field of phononics.

Dr. Mahmoud I. Hussein has made fundamental contributions to the field of phononics and nonlinear wave propagation. Among his research accomplishments is the discovery of paradigm-shifting concepts, including resonant phonon motion in nanoscale thermal transport and controlled passive interactions between elastic phonons and instabilities in laminar fluid flow. He has also played a major role in the establishment of a scientific community for phononics through the creation of the biennial Phononics conference series and a dedicated scientific society‒the International Phononics Society. At ASME, he has been organizing the largest conference-based symposium on phononic crystals and metamaterials for over 14 years. - ASME Citation

Professor Hussein was nominated for this honor by the executive committee of the Noise Control and Acoustics Division within ASME.

Mahmoud Hussein joined the University of Colorado Boulder faculty in 2007. In addition to his service in Smead Aerospace Engineering Sciences, he is also the Faculty Director of the CU Boulder Pre-Engineering Program, and is the Vice President and co-founder of the International Phononics Society.

He will be formally inducted as a Fellow at the next ASME Congress in Pittsburgh, PA, in November 2018.