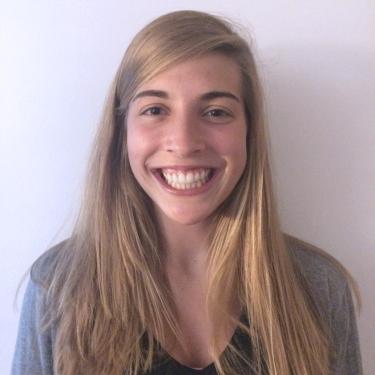 Katherine Glasheen has a nickname fit for an engineer: machine, and it is not just because it rhymes with her last name.

A second year aerospace PhD student, she has a drive to advance technology, and is conducting research on socially aware drones, a project that will become increasingly important with wider adoption of UAVs. Today, however, it is something that is future focused enough that even her advisor calls it, "kind of wild."

“The technology is developing faster than society can handle," Glasheen says. "One drone delivering a package in downtown Denver is challenging enough, but what about when there are hundreds of them? We need systems that are scalable and robust."

Her ideas have already earned a major stamp of approval. She was recently awarded a prestigious National Science Foundation Graduate Research Fellowship.

Her proposal calls for using internet data to infer local attitudes about drones.

"If the UAV could analyze news articles and comments on websites and knew people in the area it was traveling were uncomfortable with drones, it could deliberately avoid flying over places like schools, hospitals, and parks,” Glasheen says.

It was an intriguing possibility for her advisor, Associate Professor Eric Frew.

"The idea is to create an 'ethical drone' that understands and tries to respect local attitudes. It is a novel way to think about combining unmanned systems, big data, and artificial intelligence. I've not heard anyone suggest it before," Frew says.

To get there, Glasheen is first working on improving more conventional trip planning methods.

"For a delivery drone, the path it's following is preplanned and loaded before it takes off. That doesn't account for any variables it could encounter on the way where it would need to change course," Glasheen says.

What kind of variables? Think of the things you encounter driving to the grocery store. As humans, we can quickly react if a driver runs a red light. If we encounter traffic, we can take a different route.

Glasheen wants the drone to be able to change course and make adjustments midflight, but the AI is not the only problem. The kind of computer needed to process that much data is large and heavy, and would quickly turn a flying drone into a grounded paperweight.

Drones in the Cloud

That is where the cloud can come in come in. She sees a future where UAVs can regularly contact cloud systems to relay problems and determine solutions.

"The drone has a small brain, but there's a big brain in the cloud. If the drone could ping the cloud and asks for help, you can get a solution to safely navigate through an environment," Glasheen says.

The technology has great potential for the future. While delivery drones are often discussed as a public use, a UAV that can exchange data with the cloud could improve military reconnaissance and even weather forecasting.

"It's all so exciting. The field is evolving every day and you can see new applications," Glasheen says. "A lot of it still unknown, which makes some people uncomfortable, but for me it's thrilling."