We Have Liftoff! Student-Built Satellite Launches from Cape Canaveral 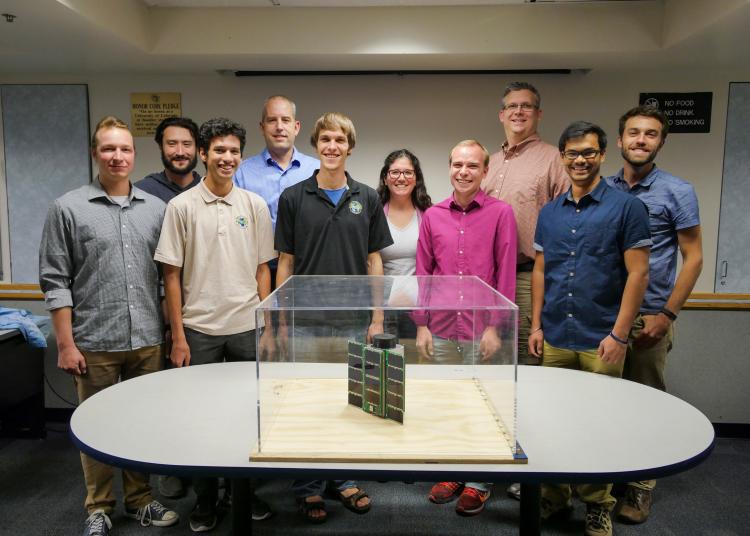 Members of the Challenger team with the microsatellite before it left CU Boulder.

A University of Colorado Boulder student-built microsatellite is on its way to the International Space Station.

The satellite, named ‘Challenger’, had a successful lift off Tuesday, April 18, 2017 at 9:11 AM MDT from Cape Canaveral. It is part of the European Union sponsored QB50 project to deploy a network of miniaturized satellites to study part of Earth’s atmosphere.

The effort is being led by the von Karman Institute, located in Belgium, with this mission being the first of two launches that will take the network of satellites into orbit. The first rocket, built by Colorado-based United Launch Alliance, carrying 28 CubeSats, will soon dock with the International Space Station. CubeSats are fully functional miniaturized satellites that are about the size of a loaf of bread. They generally weigh less than three pounds each and use off-the-shelf electronic components. They are designed to facilitate access to space research at lower cost.

This QB50 project represents a unique collaboration between universities and research institutes from 23 countries around the world. All of the satellites were designed and built by students. At CU Boulder, aerospace professor Scott Palo says 53 students took part in the construction of Challenger. 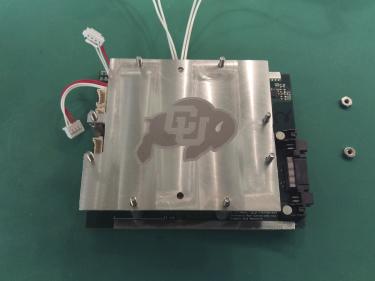 The CU Boulder Ralphie logo engraved on an interior component of the satellite.

"We are developing young engineers who have already been through the lifecycle of a satellite from concept to operation, but this is more than just a training program. We’re combining learning with valuable scientific measurements," Palo says.

The QB50 mission is the first attempt to use a constellation of CubeSats to provide multi-point measurements of the mid-lower thermosphere, an area of the atmosphere located between 125-250 miles in altitude (200-400 km). What we know about this area of the thermosphere is limited because it is difficult and risky to reach. It is too high in altitude to be measured by ground radar or small rockets and is too low for most satellites.

“Data gathered from this mission will help us gain a better understanding of the relationship between Earth’s atmosphere and the Sun’s radiation,” says Andrew Dahir, the lead CU Boulder PhD student on the project. 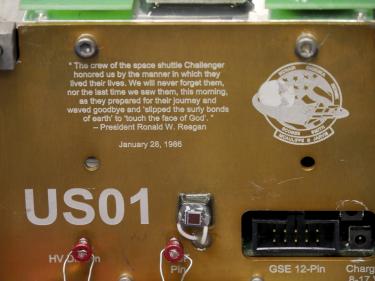 The Space Shuttle Challenger memorial etched into the satellite body.

After deployment, the CubeSats will orbit around the Earth several times a day, taking a large number of measurements of the gaseous molecules and electrical properties of the thermosphere.

“This project is the very first international real-time coordinated study of the thermosphere phenomena. The data generated by the constellation will be unique in many ways and they will be used for many years by scientists around the world”, says Dr. Davide Masutti, QB50 project manager at the von Karman Institute.

In addition to its scientific mission, Challenger also includes multiple personal touches. The satellite sports an engraved CU Boulder buffalo on an interior component, and contains a memorial to its namesake, the US Space Shuttle Challenger. CU Boulder aerospace graduate Ellison Onizuka (BS 69’, MS 69’) served as a mission specialist on the flight.