Since the first CubeSat was developed in 1999, these miniature satellites, which range from the size of a coffee cup (10 cm x 10 cm) to the size a loaf of bread (10 cm x 30 cm), have emerged as invaluable tools of education and science. Not requiring the massive budgets, skilled labor force and machining resources of traditional satellites, CubeSats offer students the unique opportunity to design, construct and test hardware that will be flown in-orbit with meaningful scientific objectives. Unloading MinXSS from testing in a thermal vacuum chamber.

Currently, LASP (Laboratory for Atmospheric and Space Physics) is putting the finishing touches on MinXSS, a four-year NASA-funded CubeSat that will be analyzing the soft X-ray spectrum of the sun. As Coloradans can readily attest, sunlight plays a critical role in our day-to-day lives, impacting everything from our moods to the growth of our crops. However, in less obvious ways, the sun’s activity, through solar flares and coronal mass ejections, can intimately impact our telecommunication and navigation systems.

The key to predicting the occurrence of solar weather, and ideally mitigating its harm, is having a thorough understanding of the solar spectrum. MinXSS is attempting to contribute to this understanding by collecting data on the sun’s soft X-ray emissions, a region that Mason describes as a “potentially very scientifically rich part of the spectrum.” 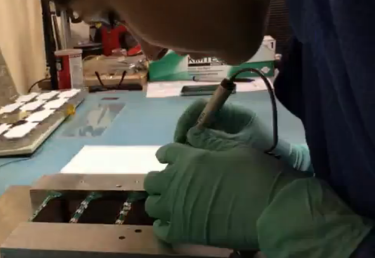 “The soft X-ray spectrum has really not ever been measured on a daily basis due to technical challenges. Because X-rays like to penetrate, not reflect, we can’t use traditional diffraction gratings. To measure X-rays, we would usually hit them against silicon, which would generate electrons that we could measure. Soft X-rays get into the ‘noise’ of these detectors though, making that method impractical.”

To avoid these technological pitfalls, MinXSS will employ “X-123”, a primary instrument developed by Amptek, Inc. that will allow for functional, daily measurements of soft X-rays for the first time.

The MinXSS development team consisted of two CU AES faculty advisors (Dr. Scott Palo and Dr. Xinlin Li), staff engineers from LASP and students from CU. Aside from the technological obstacles, one of the biggest challenges faced by the MinXSS team was the high-rate of student turnover. According to Mason: 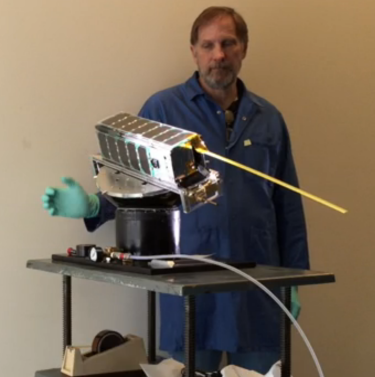 “We’ve had a lot of student turnover just because an overwhelming amount of participants are Masters students that only stay for a year or two. [To counter this,] I developed a ‘Continuity document’ to help promote effective transmission of knowledge and to address all the questions that the students have.”

MinXSS is part of a greater international movement to use CubeSats for meaningful scientific research. Woods observes:

“Science from CubeSats is about to explode. CubeSat technology is the future of a lot of [aerospace] science. NASA’s budget is being cut – we can no longer afford billion dollar missions. So it’s time to do big science in small packages.”

MinXSS is set to launch on November 19, 2015. Its data will be used to refine the forecasts made by NOAA’s Space Weather Prediction Center and the satellite drag models produced by the Air Force.

To catch a glimpse into the MinXSS manufacturing and integration process, check out the video below: