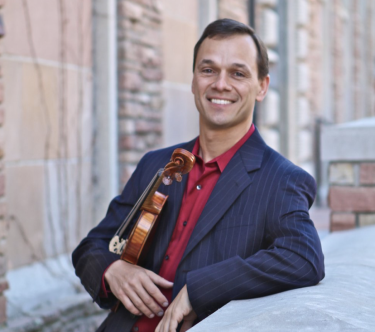 My heart is heavy. Associate Professor of Violin Charles (Chas) Wetherbee passed away on Jan. 9, 2023, after a courageous fight against cancer. A beloved member of our faculty since 2012, he will be sorely missed by all who knew him.

Having studied at the Curtis Institute of Music, Chas brought to the College of Music a wealth of expertise and experience from his varied career as a soloist, chamber musician, orchestral concertmaster, teacher, coach and collaborator. He performed throughout the world—including Europe, Asia, the Middle East, Canada, Mexico and across the United States—and at many international music festivals.

A native of Buffalo, New York, Chas gave his first performances at age 6. He made his debut with the Buffalo Philharmonic Orchestra under Symon Bychkov and went on to perform with the National Symphony under Mstislav Rostropovitch—as well as the Kyoto Symphony and Japan Philharmonic, the Philharmonic Orchestra of Bogotá, the Orquesta Sinfónica Nacional de Mexico, the Philadelphia Chamber Orchestra and the National Repertory Orchestra, among others. As a recording artist, he was represented on Naxos, Seize the Music Records, Weasel Records and Vienna Modern Classics, as well as the Cascade labels; he was also featured on a recording with the Columbus Symphony Orchestra playing Jules Massenet’s soaring “Meditation” from Thaïs.

A devoted chamber musician, Chas was first violinist of the highly respected Carpe Diem String Quartet with whom he regularly toured. He also served as concertmaster of the Boulder Phil. Learn more about Chas’ remarkable professional achievements here.

The Washington Post described Chas as “a consummate artist … with flawless technique.” But that’s only part of his legacy. He was also a consummate Mensch, widely known and loved for his kindness, enthusiasm, unwavering optimism and overall graciousness. I know we’ll all miss his artistry, his humanity, his friendship and his ready, sparkling smile. And I know we all share in the grief of his wife, Karina, and their three children.

Chas was the main provider for his family, who now face financial challenges. I invite you to join me in supporting Chas’ family at this difficult time.

Assistant Professor of Composition Annika Socolofsky blends the realms of art and science through the Instrument Design Lab (IDL). The course offers a science-based context to instrumentation, sound and musical creation, giving College of Music students a foundation in the science of music. END_OF_DOCUMENT_TOKEN_TO_BE_REPLACED

It was a busy fall for the American Music Research Center (AMRC)! One of the... END_OF_DOCUMENT_TOKEN_TO_BE_REPLACED

Friends, My heart is heavy. Associate Professor of Violin Charles (Chas) Wetherbee passed away on... END_OF_DOCUMENT_TOKEN_TO_BE_REPLACED
Return to the top of the page