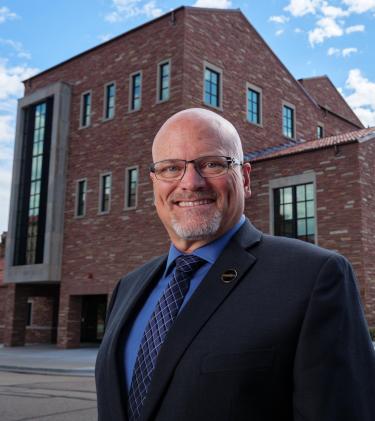 John Davis is Dean of the College of Music since January 2021. Previously, he served as Senior Associate Dean of the college from 2012-2020. For more than 30 years, he has been an active clinician, performer and guest conductor throughout the United States and Canada.

Davis joined the University of Colorado Boulder faculty in 1999 as Director of Jazz Studies and has taught courses in jazz history, jazz administration and pedagogy, big band, combo, vocal jazz, jazz techniques and management and leadership. Under his direction, the jazz program was awarded 14 DownBeat magazine Student Music Awards, was recognized by the university chancellor as one of the university’s “core programs of excellence” and was the first named program on the CU Boulder campus when it became the Thompson Jazz Studies Program in 2013. Prior to his appointment at CU Boulder, Davis served as Assistant Director of Jazz Studies at the University of Northern Colorado, where he also served as Festival Coordinator for the UNC/Greeley Jazz Festival for six years.

For 15 years, Davis served on the summer faculty of the Birch Creek Music Academy in Door County, Wisconsin, and was a faculty member of the Texas All-Star Jazz Camp in Plano from 2009-2013. He served as Artistic Director for Jazz en Vercors, an eight-day festival held each summer in the Vercors Region of France. He also served as the Mountain Region Coordinator for the International Association for Jazz Education (IAJE) and was Director of CU’s Mile High Jazz Camp for five years. Additionally, Davis served as President of the Colorado Unit of (IAJE) and was coordinator for the Colorado All State Jazz Bands from 2001-2003.