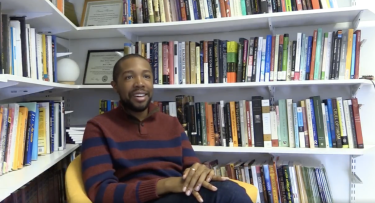 Photo: In this brief video, meet Kedrick Armstrong and hear him share his discovery of Irene Britton Smith's “Sinfonietta.”

There’s no doubt about it, the career of Kedrick Armstrong—graduate orchestral conducting student—is quickly gaining momentum:

One of two CU music Buffs on The Washington Post’s “composers and performers to watch” list, Armstrong will conduct the world premiere of “The Factotum” with the Lyric Opera of Chicago in February 2023; meanwhile, closer to home, he’ll conduct the CU Symphony Orchestra’s performance of Irene Britton Smith’s “Sinfonietta” at Macky Auditorium next week.

Armstrong pulled “Sinfonietta” from the Helen Walker-Hill Collection in the American Music Research Center archives, and has been working on converting the original score to parts for an orchestra for over a year. “Immediately, I knew there was something in her language and in her writing that was different from anything that I had ever heard before, especially coming from a Black woman in the 20th century,” he says.

Smith was an elementary school music educator for most of her life and wrote “Sinfonietta” as her thesis project for her master’s program. According to Director of Orchestral Studies Gary Lewis, “It will likely be the first performance of the work since the year of its composition in 1956.”

Armstrong says he’s excited to conduct the overdue premiere, but also acknowledges a certain pressure that comes with the territory. “How do you interpret a work where there’s never been an interpretation before you?” he asks. “It feels like a lot of weight, but I continue to put myself in experimentation where you try something and you try again if it doesn’t go as you want it to.

“The biggest thing I hope audiences take away from this is that there is no ‘sonic monolith’ to Black music, even in classical music,” Armstrong adds. “There is such a wide variety of what Black composers are engaging with. I think that’s the key to opening up the door to true equity of Black composers, across the board.”

The CU Symphony Orchestra will perform “Sinfonietta”—along with Emilie Mayer’s “Faust-Ouverture” and Jean Sibelius’ Symphony No. 2 in D Major—at 7:30pm on Nov. 16.

Assistant Professor of Composition Annika Socolofsky blends the realms of art and science through the Instrument Design Lab (IDL). The course offers a science-based context to instrumentation, sound and musical creation, giving College of Music students a foundation in the science of music. END_OF_DOCUMENT_TOKEN_TO_BE_REPLACED

It was a busy fall for the American Music Research Center (AMRC)! One of the... END_OF_DOCUMENT_TOKEN_TO_BE_REPLACED

Friends, My heart is heavy. Associate Professor of Violin Charles (Chas) Wetherbee passed away on... END_OF_DOCUMENT_TOKEN_TO_BE_REPLACED
Return to the top of the page