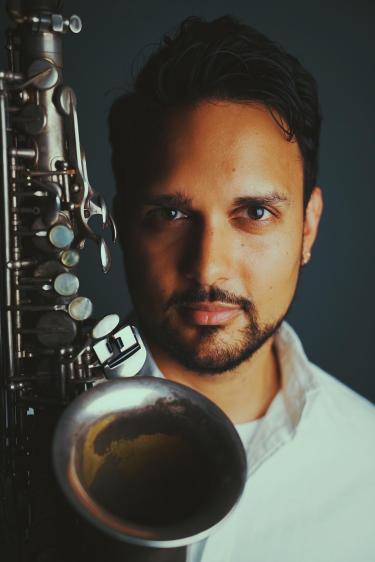 Alumnus Aakash Mittal (BM ‘07) has been busy. His album “Nocturne”—released at Dazzle Denver last fall, and on which he’s joined by Rajna Swaminathan on mridangam and Matt Fuller on guitar—has been featured on The New York Times playlist. His awards and honors further include the Chamber Music America/ASCAP Award for Adventurous Programming of Contemporary Music, the Herb Albert/ASCAP Young Jazz Composers Award and an American Institute of Indian Studies Creative and Performing Arts Fellowship.

Currently, as a Composer Fellow of the Gabriela Lena Frank* Virtual Artist Partnership Program, the Brooklyn, New York-based alto saxophonist, composer and improviser is collaborating with student MarieFaith Lane—who’s pursuing a master’s in violin performance and pedagogy at the College of Music—on a project blending Hindustani and Western Classical music.

We recently caught up with Mittal and we’re inspired to share his unique approach to creating a new solo work for violin, and his perspectives on the evolution of his artistry and career.

Describe the Virtual Artist Partnership Program and what it’s been like to collaborate with the College of Music.

The Virtual Artist Partnership Program is a new initiative through the Gabriela Lena Frank Creative Academy of Music. In collaboration with Harumi Rhodes’ studio, nine composers and nine violinists are collaborating to create and premiere new solo works for violin. I have very little experience writing for strings, which makes this a very exciting project for me.

I am thrilled to be paired with MarieFaith Lane. She’s been a wonderful collaborator. We began our process with a few weekly sessions over zoom. During these online hangs, we spent some time improvising together by trading phrases between saxophone and violin.

As a composer, I rarely write a piece for an instrument. I am much more interested in writing a piece for the human who is performing the work. I find that musical improvisation helps me get to know the people I am working with. In jazz communities, it’s said that our improvised music reflects our personalities. I think there’s a lot of truth to that. MarieFaith spent quite a bit of time answering my questions about the violin. We imagined various ways to make sound that don’t necessarily fit into the standard technique.

Last December, we had a workshop session with Gabriela and Harumi. The seed idea I submitted was derived from vocal melodies I had sung. The phrases utilized a lot of bends between pitches called meend. As I had transcribed my voice to create the sketch, the range of the piece was very narrow. I’m looking forward to fleshing out the work with MarieFaith in the coming weeks as we work toward the premiere. Stay tuned!

How did you ignite a successful career as a composer, performer, band leader, producer … and more?

I often started these projects feeling like I had no idea what I was doing and that I was learning how to create the work while I was creating the work. Except for my most recent album, this is how all of my recordings, and most of my body of work and collaborations, came to be.

My latest foray into writing for wind ensembles started with a call to my first saxophone teacher and fellow CU alumnus Matthew Arau. I shared my idea to bring what I was learning about raga music to wind band literature. He challenged me to not wait for funding or anything else and to jump in and “write the first two minutes.”

Taking the first step to start a project is often the hardest part. Challenging myself to write the first two minutes kickstarted a very successful new branch of my creative work that continues to flourish.

Having majored in saxophone with an emphasis in jazz studies at the College of Music, we’re interested to know your career highlights since graduating from CU Boulder.

Two highlights of my career that come to mind immediately are working with Milford Graves and studying music in Kolkata, India.

When I moved to New York City, I met the legendary drummer, healer and martial artist Milford Graves when he was playing at the Village Vanguard. My time with him from 2015 until his passing last year transformed my life and my work. He was one of the most decolonized people I have ever met. He helped me to shine a light on the belief systems that I was taught over the years, and to liberate myself and my art from them.

This work has impacted my music technically, in the ways I improvise, as well as how I approach timbre and pitch. It has also affected the positionality of music in my life. Milford Graves was a polymath. Music was only one aspect of his creative work. Witnessing his process helped me to further embrace the many sides of my own creativity and allow them to exist together.

In 2009, I started taking lessons in Hindustani raga music with sarod artist Prattyush Banerjee. This eventually led me to live in Kolkata with a fellowship from the American Institute of Indian Studies. During that time, I performed with Bengali folk musicians in the Baul tradition. I played with Ravi Shankar’s tabla player Tanmoy Bose. I joined an underground community of artists who created original creative music out of myriad influences and a sense of necessity. And I experienced the pedagogy of aural traditions, and learned that there are many ways to learn and rehearse music.

These experiences not only impacted my music but also my life view. I have a better understanding that there are many ways to live that are different from the cultural practices in the United States. It’s my hope that, as I continue to decolonize myself, it will be reflected in my music and support people who are on a similar journey.

My latest news is that I recently released a recording, “Nocturne.” The album documents the music I composed during my fellowship in India. The concept behind it is to reimagine the idea of the nocturne through the lens of Hindustani night ragas, free improvisation and urban noisecapes. The album is a mix of instrumental music tracks that each utilize a specific raga as the seed material. They are interspersed with sound collages of urban street noise I recorded while traversing Kolkata. I wanted to place the composed noise tracks next to the composed instrumental tracks and challenge our ideas around noise and music.

The day after the release, I went into the studio and started recording a new set of music—“Breathe”—composed for an octet, including two vocalists and three string players along with my usual trio of mridangam, guitar and saxophone. For this project, I’m writing songs and lyrics for the first time, which I feel very excited about.

What experience at the College of Music had a lasting impact on your career?

When I attended CU Boulder, there was a student group that I joined called the Coalition for Creative Music. It was run collectively by a group of students from across campus. Every CU student paid one dollar into our budget giving us an annual budget of about $30,000 to put on a concert series. All of the concerts were held at Old Main and were free to the public. Without any pressure to sell tickets or fill the hall we had the freedom to program whatever creative music we wished. It was through this group that I learned how to produce concerts.

As a composer and band leader, being able to produce my own concerts has been one of the most important skills I learned while at CU. As young people do, we made all kinds of mistakes. I remember one concert where, 15 minutes before the show, the lights person had still not shown up. Simultaneously, myself and another coalition member said, “Didn’t you book him for tonight?” We realized no one had scheduled someone to come in and run lights!

The coalition was a safe space for us to gain experience without the pressure of making a profit. For each concert, we had to figure out promotion, airport pickups, booking hotel rooms, per diems, negotiating artist fees and curating a year-long series.

I developed more compassion for presenters and the decisions they make when putting together a concert series. And it helped me as an artist to understand what goes into presenting a concert. We were often faced with 20 or 30 bands all vying for one of six concert dates. We had to say ‘no’ a lot. I learned that when presenters say ‘no,’ it's often not personal.

It was also through this student group that I formed numerous friendships and found mentors that would continue to support me and my career. My relationship with Rudresh Mahanthappa and Vijay Iyer formed through the Coalition for Creative Music. I got to meet John Hollenbeck and Robert Dick. And I met Rez Abbasi, Dave Phillips and John O’Gallagher. Many of these friendships created opportunities that led to my current band and latest album. If a student is interested in a career in creative music, I highly recommend they gain experience as a concert presenter.

It was a busy fall for the American Music Research Center (AMRC)! One of the... END_OF_DOCUMENT_TOKEN_TO_BE_REPLACED

Friends, My heart is heavy. Associate Professor of Violin Charles (Chas) Wetherbee passed away on... END_OF_DOCUMENT_TOKEN_TO_BE_REPLACED

Longtime Associate Professor of Saxophone Tom Myer retired in May. As the year draws to a close, enjoy his insightful career reflections and advice … and discover what he’s up to now! END_OF_DOCUMENT_TOKEN_TO_BE_REPLACED
Return to the top of the page