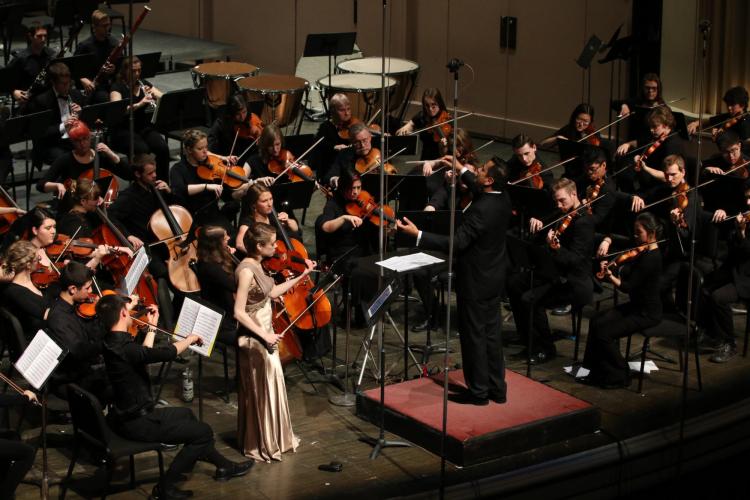 “I have the best seat in the house,” says Director of Orchestras and Professor of Music Gary Lewis. “It’s thrilling to be amidst the musicians and to feel the energy that inspires them and therefore inspires me.”

On Thursday, Oct. 25 at 7:30 p.m. in Grusin Music Hall, you will find Lewis conducting the Chamber Orchestra in their free fall concert, embracing the energy from the musicians he conducts.

“For some students, it’s their first time performing, while others have performed multiple times already. Regardless, they all bring this amazing energy to the performance that is truly inspiring, especially with the repertoire of this quality.”

“It’s unique because we get to explore a part of repertoire that wouldn’t be as suitable for a performance in Macky Auditorium,” says Lewis. “The Beethoven piece that they will be playing fits right in the middle, allowing for a smaller-sized orchestra to take this challenge head-on.”

The orchestra will be performing two beloved masterpieces, Beethoven’s Symphony No. 6, also known as the “Pastoral Symphony,” and Tchaikovsky’s Serenade for Strings in C Major.

“I’m very excited about both of these works,” says Lewis. “The Pastoral Symphony is a masterwork of incredible beauty and is a work the students need to experience. And Tchaikovsky’s Serenade for Strings is such a tour de force for a string orchestra, with its bold and virtuosic nature.”

Beethoven was said to have had a strong connection to nature and often spent his summers in Vienna, where he found solace in the natural world around him. This influence can be heard in the Pastoral Symphony, in which even the movement titles relate back to nature. It also happens to be one of Beethoven’s more well-known pieces among classical music fans and general music fans alike.

Tchaikovsky’s Serenade is another recognizable piece of music, often considered to be among his most popular and enduring works. The piece is said to have been written in honor of his mentor, Mozart, with an almost “inner compulsion.” This work falls somewhere between a symphony and string quartet, making it perfect for the Chamber Orchestra to undertake.

“I really hope the audience will be inspired and engaged by this music and the musicians,” says Lewis. “These two works have such a wide variety of emotions, characters and colors that will take the audience on a thrilling journey.”
The Chamber Orchestra performance is Thursday, Oct. 25 at 7:30 p.m. in Grusin Music Hall. It’s free and open to the public. For more information, visit cupresents.org.

MarieFaith Lane, a current graduate student and Holiday Festival 2021 concertmaster, offers a first-person perspective on the spirit of this weekend’s community event. END_OF_DOCUMENT_TOKEN_TO_BE_REPLACED

Check out this Q&A with Eunjeong (EJ) Lee, including tips for applying to the College of Music, advice for a successful audition and more. END_OF_DOCUMENT_TOKEN_TO_BE_REPLACED
Return to the top of the page