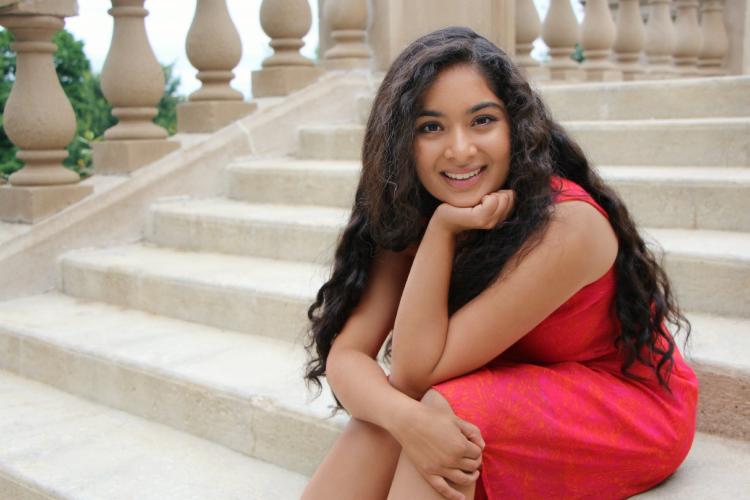 As we wrap up the semester, we’re publishing conversations with the Music Buffs who were named Outstanding Students by the faculty for the 2016-17 academic year. Today, we talk with freshman clarinet performance and instrumental music education double major Anoushka Divekar.

College of Music: Where are you from originally?
Anoushka Divekar: I am from Coralville, Iowa.

COM: What other musical interests do you have?
AD: I've played violin and piano for 12 years, though not nearly as much since I started college. I really enjoy singing, and am in the Women's Chorus here (I also sing plenty in the shower!). If I could start over and play anything, however, I'd want to play the offstage horn part or the offstage cymbal on Mahler 2 … but I've been told to maybe just stick to clarinet. Mahler symphonies are the reason I want to play in an orchestra someday. I also love musical theatre, but I've never really had the chance to get into it. I've been dancing since I was 4 in the Indian Classical style Bharatanatayam, and I enjoy both Indian Classical (Hindustani) music and Bollywood music.

COM: What has been the best experience during your first year at the College of Music?
AD: My best experiences here have been going to concerts of my peers and of the faculty. I'm always inspired to practice harder when I hear other people who sound amazing. There are so many concerts and other recitals here. Whenever I go to one I immediately feel like practicing and trying to make sounds like that. It is especially inspiring to hear people in my own studio as part of the orchestra or in recitals and try to emulate their sounds!

COM: What are your plans for the summer?
AD: This summer, I'll be teaching with Generation Teach as a teaching fellow. I'll be teaching some "school subjects" classes and a few classes of my choosing. I hope to teach some Bollywood dance! I'll probably be up to practice during all of my free time. My sister also promised me she'd teach me how to skateboard this summer, so I'm excited for that. I'll definitely be wearing a helmet!

COM: Why do you love studying music?
AD: There's nothing I've ever enjoyed more than music. It is so worth it to get up early and go to the practice room—even if I don't want to get out of bed at first. It doesn't feel like work to practice, it's just a whole lot of fun. I also love playing in ensembles because I get to share such an important part of myself with other people who enjoy it just as much. I also really love theory and teaching, so I feel like I'm doing exactly what I've always wanted to do. There's nothing better!

While these are uncertain times and the future seems equally uncertain, COVID-19 has pushed us to leverage technologies in impactful ways that will surely outlast this pandemic – through distance learning, collaboration and performing, we’ve risen to the challenge. END_OF_DOCUMENT_TOKEN_TO_BE_REPLACED

College of Music Dean John Davis sits down with us to talk about what’s on the horizon as the college begins a new year with a new dean. END_OF_DOCUMENT_TOKEN_TO_BE_REPLACED

As we approach the final deadline to apply to the College of Music, student ambassador Isabel Goodwin has compiled a few of her favorite things about being a CU Boulder music student. END_OF_DOCUMENT_TOKEN_TO_BE_REPLACED
Return to the top of the page