The program is set for the 31st Bruce Ekstrand Memorial Graduate Student Competition at the College of Music.

At last week’s semifinals, 10 graduate students from different programs performed for faculty judges and five groups emerged as the finalists for the college’s premier performance competition.

Named for the late Bruce Ekstrand, a former vice chancellor for academic affairs, the competition invites any graduate student to compete for the chance at a cash prize to be used toward recording, other competitions, performance and outreach.

“It’s a big deal for us to get to perform music we love in a different setting,” says soprano finalist Alicia Baker.

Each performer sees their 15 minutes on stage as a chance to share music that has shaped their lives. 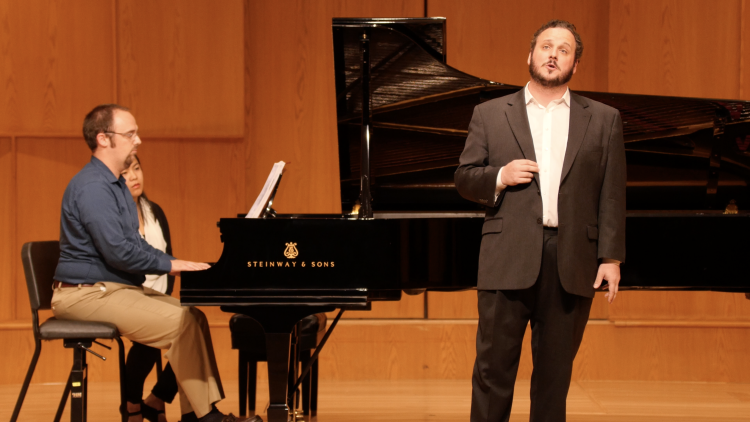 “This is all music that I love and I’m excited to get the chance to perform it.” Joshua DeVane performs Tom Cipullo’s “Another Reason Why I Don’t Keep a Gun in the House,” Schubert’s “An die Leier” and “Ò vin dissipe la tristesse” from Ambroise Thomas’ “Hamlet” with pianist Mac Merchant. As one of two vocalists on the program, DeVane, who sang the role of Eisenstein in Eklund Opera’s fall production of “Die Fledermaus,” says he’s looking forward to the chance to show off a different side of his ability.

“We performed the pieces in studio and someone said, ‘I didn’t know you could make sounds like these.’ Everyone’s only heard me sing operatic pieces before,” he says. 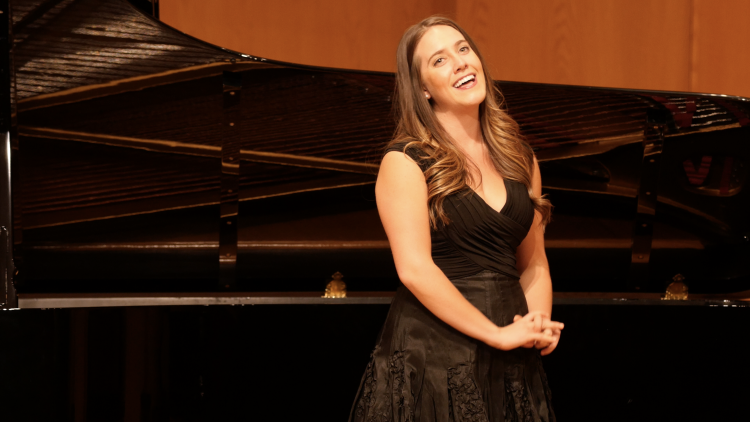 Alicia Baker, the other singer in the competition, agrees.

“We’re doing art song, so it’s a different kind of singing. You can be more artistic because you don’t have to project over a symphony.”

With such a wide range in repertoire between his two collaborators, Merchant says it’s been a fun challenge to prepare for the competition.

“It’s really an appetizer plate of music,” he says. “Alicia’s Henry VIII songs were harder to latch onto at first, but that’s a good thing because it means we could always go deeper into them. And I love Josh’s two songs because people probably haven’t heard them before.”

For both Baker and DeVane, the range of works they’ll perform puts their versatility to the test.

“When you do a program of several short pieces, you have to switch modes really quickly. Each piece is like a little microcosm of an emotion,” says DeVane. “In my set, I’ll fight back tears one moment and sing a drinking song the next.” 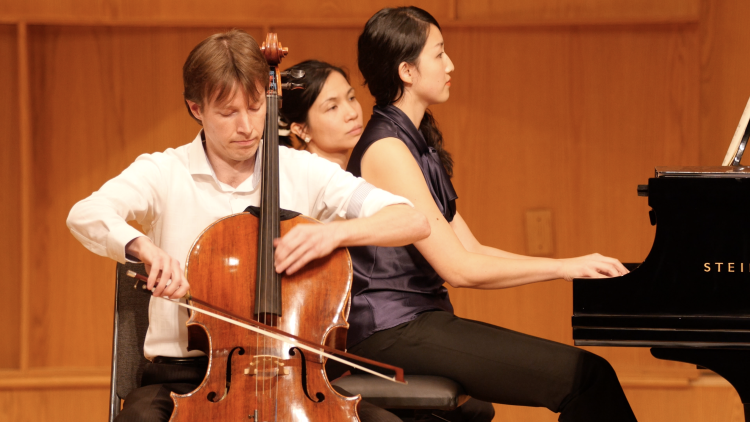 Cellist Andrew Brown, who performs with his wife, pianist Madoka Asari, says rehearsals have taken on a different tone than they would if he were preparing for a recital.

“Both events are similar in that as a musician I am always aiming for higher limits, and I strive to emotionally distract the audience from ‘real’ life, even if for a few minutes at a time.

“The difference in a competition is that I expect every other musician to bring their best performance to the stage, which becomes an even more motivating incentive for me.”

The couple will play Robert Schumann’s Adagio and Allegro, Op. 70, and Gaspar Cassadó’s “Danse du Diable Vert” in hopes of taking home the professional development money and repeating what Brown says was one of his most rewarding experiences as a musician.

“Last summer, Madoka and I organized a recital in her hometown of Sapporo, Japan. It was incredibly valuable to discover how much it really takes to put together a successful performance, and that’s not even including the time spent in the practice room. We hope to make that performance an annual one.” 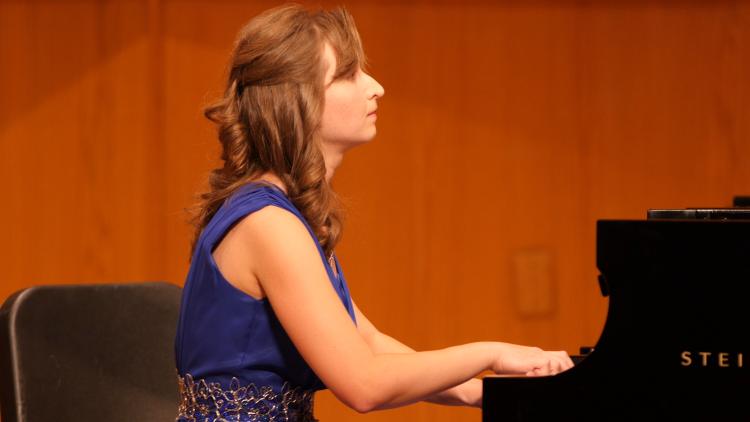 For Maria Kurchevskaya, the competition is a chance to take the audience on a musical tour of her home country.

“As a Russian pianist, to share the Russian culture and its great musical heritage with people in the United States is thrilling,” she says. “I'd like to treat this performance opportunity as a special gift to share the incredible beauty of these pieces with people who love and appreciate music.”

“I feel a special intimate connection with the music of Rachmaninoff, since my own musical roots go all the way back to Konstantin Igumnov, a friend and colleague of the great composer,” Kurchevskaya adds. 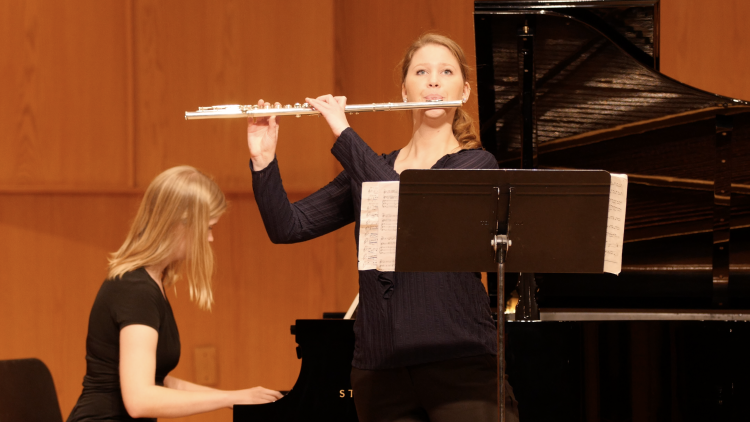 Wind instruments will be represented on Sunday as well: With pianist Grace Burns, flutist Leanne Hampton plays Gaubert’s “Fantasie,” Paganini’s Caprice No. 4 and Beglarian’s “I Will Not be Sad in This World.”

The Beglarian is particularly poignant to Hampton. “I love the sound and tone of the alto flute,” she says. “I was inspired by a performance of this work by a former CU flute graduate and dear friend, Andrea Murano, and I think of her when I'm playing it.”

Hampton says over the course of the preliminary-, semifinal- and final-round performances, she’s added yet another valuable skill to her musical toolbox.

“Keeping the music fresh, exciting and imaginative over a long stretch of time is a skill I'm constantly addressing in my practice!”

Judging the smorgasbord competition will be former College of Music faculty member Julie Simson, Professor Emeritus Larry Graham and composer Ofer Ben-Amots. Baker says they’ll have their work cut out for them.

“It’s almost going to be like comparing apples and oranges. It’s hard to compare vocalists and different kinds of instrumentalists,” she says.

But regardless of how the competition turns out, Brown says the finalists are all keenly aware of what a unique opportunity this is.

Adds DeVane, “every audition is a competition. I think a lot of smarter musicians learn how to perform by performing in competitions like this—not just taking lessons and talking about performing.”

The 2016 finals of the Bruce Ekstrand Memorial Graduate Student Performance Competition are Sunday, Nov. 13 at 2 p.m. in Grusin Music Hall. You can watch live online at the Livestreamed Performances page.

It was a busy fall for the American Music Research Center (AMRC)! One of the... END_OF_DOCUMENT_TOKEN_TO_BE_REPLACED

Friends, My heart is heavy. Associate Professor of Violin Charles (Chas) Wetherbee passed away on... END_OF_DOCUMENT_TOKEN_TO_BE_REPLACED

Longtime Associate Professor of Saxophone Tom Myer retired in May. As the year draws to a close, enjoy his insightful career reflections and advice … and discover what he’s up to now! END_OF_DOCUMENT_TOKEN_TO_BE_REPLACED
Return to the top of the page