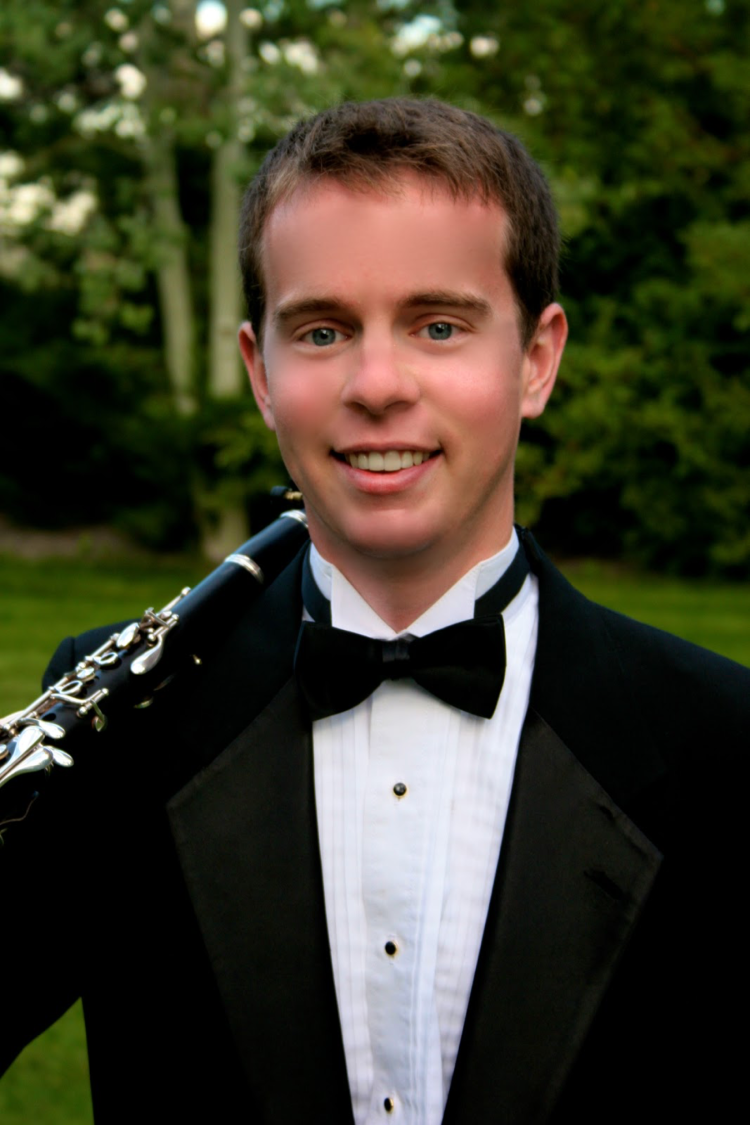 Kellan Toohey was the winner of the 2015 Ekstrand Competition.

Persistence has paid off for Kellan Toohey. The clarinet doctoral student can now claim the title of Bruce Ekstrand Memorial Graduate Student Performance Competition winner—along with $2,000 in professional development funds.

This was Toohey’s fourth time entering the competition. “It’s kind of disorienting to win, but it feels great.”

The Ekstrand Competition is the premier performance competition for graduate students at the College of Music. The chance to perform for a panel of judges in a high-stakes situation is one Toohey and the other finalists relish. “This kind of funding is very hard to come by,” he says. “It’s a great opportunity for us.”

He says the differentiator this year was his repertoire. “I was more prepared this time and knew what to expect,” he says. With collaborative piano faculty Hsiao-Ling Lin, Toohey performed “Fantasie” by Jorg Widmann, “Fantasia” from “Fantasia and Allegro” by Carl Maria von Weber and the third movement of Francis Poulenc’s Sonata for Clarinet and Piano. Each piece was chosen carefully. “I chose the first piece because it’s one of the hardest I’ve ever learned, and shows off the clarinet. The second is an extreme contrast … a romantic and beautiful piece. The third is from a different time period, so it has a different feel and is really fun to play and listen to,” he explains.

Toohey, a Boulder native, has attended recitals at the College of Music since middle school, and watched the Ekstrand Competition finals as an undergrad. “I was always amazed and inspired by the musicians. I never thought I would be back here competing as a doctoral student, much less that I would win!” After earning a bachelor’s degree at CU, Toohey attended the University of Northern Colorado for a master’s degree.

He is still ironing out plans for his prize money, but has his eye on either international competitions, music festivals or funding his first CD. “I just commissioned music for it from a couple of CU alumni and other composers,” he says. “I want to cover a range of styles, from Neo-Baroque to modern.” Toohey hopes to release the CD in the spring.

Regardless, Toohey says competing in the Ekstrand competition has been one of his best experiences at the College of Music. “Everyone has been so supportive. I can’t thank them enough … my teacher Dan Silver, my family, my friends, my church and the other musicians competing.

“Even in the years that I didn’t win, I still had fun and learned something. Having something like this on my résumé will be really helpful when applying for future jobs and competitions,” he adds. Toohey says after receiving his DMA, he wants teach, in addition to continuing to perform and compose music.

Olivia Huizar Conner shares how her background inspires her to promote Diversity, Equity and Inclusion (DEI) in music. END_OF_DOCUMENT_TOKEN_TO_BE_REPLACED

Alumna Annie Booth shares how the College of Music continues to impact her career as an award-winning jazz pianist, band leader, composer/arranger and educator—and offers valuable career advice. END_OF_DOCUMENT_TOKEN_TO_BE_REPLACED
Return to the top of the page