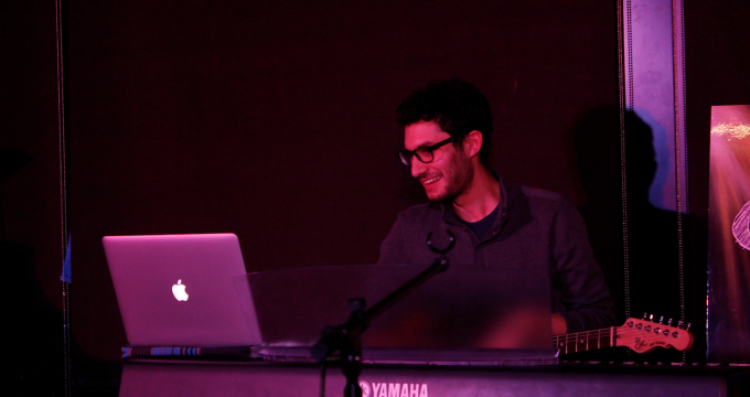 Last summer, the Undergraduate Research Opportunities Program funded Payne’s guitar effects program, where he designed his own computer program that allows him to create any kind of experimental effects he wanted.

“It was an example of engineering and actually building something, and then using that for creative output,” Payne said. “That’s what really gets me going and it was really exciting.”

The (fifth year) senior from Littleton chose CU after completing a workshop at the Berklee College of Music. There, he focused entirely on composing music for video games. Because CU offers flexibility for those seeking double degrees, Boulder was the place to complete his degrees in music composition and computer science.

“I really wanted to get into composing music for games,” Payne said. “I needed a background in technology and computer science along with music composition. This was the school for me.”

Specializing in the electric guitar, Payne says he has always been a “total band kid” and played in every ensemble he could throughout high school. At CU, Payne contributes to the Boulder Laptop Orchestra, which is a College of Music program that meets at the ATLAS Institute on campus.

“It’s a group of mostly performance majors who improvise and perform on their instruments,” Payne said. “It’s like a jazz band environment. Everyone is expected to improvise.”

The ensemble collaborates with programmers, dancers and those in charge of visuals and effects.

“I really like collaborating with others who have a variety of skills. There are a lot of different people involved,” Payne said. “It’s another positive of CU.”

While Payne was initially interested in creating video game music, his area of expertise shifted after learning from CU professor Michael Theodore.

“Over the last couple of years, he has gotten into big sound art installations,” Payne said. “They’re installations where the user can walk up and explore. It has sensors on it and will actually make sounds.”

This project, which was on display at the CU Art Museum last year, inspired Payne to further his endeavors.

“His projects have gotten me a lot more into building and prototyping things and not just writing code and performing music, but actually building interactions that people can walk up to and play with,” Payne said. “(His project) was really cool.”

Learning from others at CU is something Payne is grateful for. In addition to learning from Theodore’s technical expertise, Payne says other musicians have helped him grow.

“I learn a lot from people who know their instruments,” Payne said. “I will present things that I think will be really easy and doable, and I often find out that the things I thought would be simple are actually really hard.”

Working with others, Payne says, makes a difference.

“What I have valued most about CU are the communities that I am in,” Payne said. “Late study nights are so much easier when you’re surrounded by friends who are also struggling.”

“The idea is if one person gets stuck, the other can help you out,” Payne said. “It’s supposed to be a really active collaboration where you’re constantly switching who is actually typing. That’s something that I think is a good thing that our program requires.”

Going forward, Payne aspires to earn his PhD in music technology and teach others.

“I’d love to be a professor and teach in a program like ATLAS,” Payne said. “One that’s cross disciplinary and technology based, but still about collaboration and art.”

This article first appeared on Colorado.edu. View the original article.

It was a busy fall for the American Music Research Center (AMRC)! One of the... END_OF_DOCUMENT_TOKEN_TO_BE_REPLACED

Friends, My heart is heavy. Associate Professor of Violin Charles (Chas) Wetherbee passed away on... END_OF_DOCUMENT_TOKEN_TO_BE_REPLACED

Longtime Associate Professor of Saxophone Tom Myer retired in May. As the year draws to a close, enjoy his insightful career reflections and advice … and discover what he’s up to now! END_OF_DOCUMENT_TOKEN_TO_BE_REPLACED
Return to the top of the page