Aaron Bobrow-Strain: The Death and Life of Aida Hernandez: A Border Story 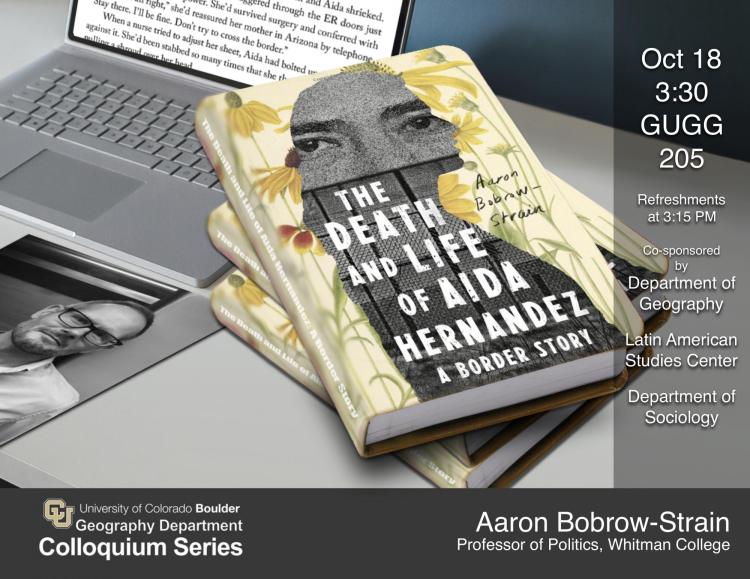 Book presentation by Aaron Bobrow-Strain, Author and Professor of Politics at Whitman College.

Book Title
The Death and Life of Aida Hernandez: A Border Story (Published by Farrar, Straus, and Giroux on April 15, 2019)

Brief Description
What happens when an undocumented teen mother takes on the immigration system in an Arizona town rocked by deindustrialization and hyper-militarized border enforcement?

When Aida Hernandez was born in 1987 in Agua Prieta, Mexico, the nearby U.S. border was little more than a worn-down fence. Eight years later, Aida’s mother took her and her siblings to live in Douglas, Arizona, just across the line. By then, the border was on its way to becoming one of the most heavily policed sites in the United States. The Death and Life of Aida Hernandez follows Aida through her optimistic, tough childhood; family separation; immigration detention; deportation; and into the tangles of a vast border security industrial complex. Aida fights for her life and risks everything to get from a place of imposed “social death” to a place where she is not just surviving the world we have created on the border, she is thriving, truly alive. This book talk weaves together history and political economy of U.S. border policies with explorations of the boundaries between academic writing, activism, and narrative nonfiction. It examines how the border came to be the way it is today, how it could be different, and what it means to write about the border today.

Recent Reviews
“Searing…A rich novelistic tale of a young woman whose life spans both sides of the United States-Mexico border…The Death and Life of Aida Hernandez is an illuminating work of literature, not an ideological tract” –Michelle Goldberg, The New York Times Book Review

“[A] caring and unforgettable borderland saga [that] reveals the profound personal toll of the immigration crisis.” –Booklist (starred review).

“A beautiful introduction to anyone interested in the subject of immigration.” –San Diego City Beat

“While this is indeed a case study of the fallout of enforcing an immoral immigration policy…Hernandez is never reduced to a lecture prop. She is the protean American, in search of herself, re-inventing as she must. She’s at times a chola, a stoner, a goth. She’s straight and she’s gay. She’s Mexican, American, mother, and daughter. She’s nearly broken by PTSD; she doesn’t quit. And she’s far from perfect, making dumb if understandable decisions. She is fully alive, worthy as every individual is of dignity and respect, though she is often begrudged this because of her accursed status.” –Oscar Villalon, LitHub

“A riveting and distressing account of one woman’s immigration nightmare, and a well-researched argument against the status quo of border security.” –Publisher’s Weekly

“A heart-wrenching story that demonstrates the human toll resulting from our nation’s lousy immigration policies.” –The Tucson Weekly

Author
He, him, his

Aaron Bobrow-Strain is a Professor of Politics at Whitman College. He is the author of White Bread: A Social History of the Store-Bought Loaf and Intimate Enemies: Landowners, Power, and Violence in Chiapas. In the 1990s, he worked on the U.S.-Mexico border as an educator and activist. He is a founding member of the Walla Walla Immigrant Rights Coalition.

Along with academic journals in the U.S. and Mexico, his writing on has appeared in The Believer, The Chronicle of Higher Education Review, Salon, Gastronomica, and The Huffington Post.

He has an MA in Latin American Studies from Stanford University and a Ph.D. in Geography from the University of California, Berkeley. He’s received grants and fellowships from the National Science Foundation and Social Science Research Council and won teaching prizes from UC Berkeley and Whitman College.