CU Boulder Professor Emeritus Karl Gustafson has high expectations for the quantum engineering researcher who will soon hold the faculty chair recently endowed in his name.

“I hope that someone might have a fundamental breakthrough in some way other than just writing papers,” he said. “It's too easy to write papers, but very hard to actually build a piece of hardware, like a quantum computer or do something else in quantum.” 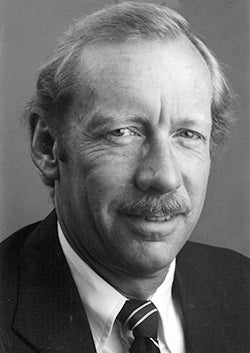 Recently created by an anonymous donor, the Karl Gustafson Endowed Chair of Quantum Engineering will be embedded in the Department of Electrical, Computer and Energy Engineering. It is intended for a faculty member with multidisciplinary research and teaching interests, who is focused on the hardware side of quantum computing and devices.

“This gift, honoring Professor Gustafson for his distinguished career, will further enable CU Boulder and the College of Engineering and Applied Science to lead the way in quantum discoveries and application,” Acting Dean Keith Molenaar said. “We are deeply grateful to the donor and pleased that Karl’s legacy will be tied to the multidisciplinary impact of this faculty chair.”

Gustafson said he was initially surprised when the donor – a former student of his – reached out to him about making a gift in his name.

“It is quite an honor. It’s an honor for me; it's an honor for the university,” he said. “It's kind of a very pleasant capstone on my career.”

While he worked closely with the donor to outline the terms of the gift, it was Gustafson who insisted on the word “multidisciplinary,” as it’s the term that most accurately describes his own career.

Gustafson retired in 2020 after a 52-year career in the Department of Mathematics and holds three degrees from CU Boulder – in engineering physics, applied mathematics and business finance. Shortly before a major stroke in 2016 prevented him from traveling and publishing, he gave three significant keynote addresses around the world – one in each of those fields.

“The Department of Physics is enormously proud that Professor Gustafson is one of our alumni, and deeply grateful to the donor for endowing this chair position in Quantum Engineering in Karl’s honor,” said Michael Ritzwoller, the chair of physics. “Karl’s illustrious career spanned mathematical physics, applied mathematics, and engineering both within and outside academia, and we hope the endowed chair holder can follow in his giant footsteps.”

Gustafson advised more than 20 PhD students across science and engineering disciplines, and published more than 300 papers and more than a dozen books in topics ranging from computational fluid dynamics to financial engineering. His ties to CU Engineering include serving as a founding member of the multimillion-dollar NSF Optoelectronic Computing Systems Center from 1988 to 2000.

He has also long been interested in quantum mechanics and computation and keeps up-to-date on developments in the field even in retirement.

“My impression is that we may not get quantum computation for a while. It's a very hard problem,” Gustafson said. “The software exists, the algorithms exist, all kinds of theory, thousands of papers. But no one can really build a quantum computer. You'll read a lot of hype about people claiming they have. But they'll only be able to do 20 or 30 qubits, and that's not a very big computer.”

However, Gustafson said quantum is a fascinating field partly because of that search for the unknown. He thinks back to the Einstein-Bohr debates, which pitted a “stubborn analytical person” against “a mystic.” Gustafson said Bohr usually defeated Einstein in the thought experiments because he explained what we didn’t know and claimed that we may never know.

“I tend to hope that Einstein was right,” Gustafson said. “I tend to believe there's an underlying reality that we can maybe discover.”

Endowed chairs are instrumental in attracting and retaining world-class faculty. They offer funding for research students/staff or state-of-the-art equipment, relieving some need for external funding and allowing for transformational research.

Created in 2021, the college's Quantum Engineering Initiative (QEI) will build and expand internal efforts in quantum research while also strengthening connections to local and regional partners.