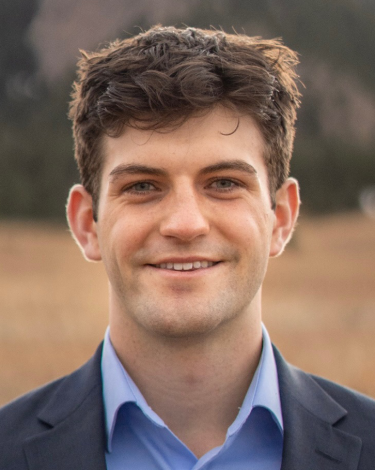 For the first time in at least two decades – and possibly ever – CU Boulder’s Student Government (CUSG) is being led by an aerospace engineer.

Ben Capeloto, a senior majoring in aerospace engineering and minoring in computer science, was elected in April 2021 as one of three student body presidents for the campus, referred to as tri-executives. He shares the leadership position with Kavya Kannan and Taylor Weinsz.

A native of Seattle, Capeloto started his college career at Carnegie Mellon before transferring to CU Boulder as a sophomore, entranced by the mountains, Pac-12 athletics and most importantly, his interest in space.

“In my first month of school when we were doing labs focused on weather balloons and using the wind tunnel to collect real data on airfoils, I knew I had made the right decision,” Capeloto said.

As the school year begins, Capeloto is excited to bring engineering representation to student government and to apply an objective, evidence-based STEM perspective to the benefit of his fellow students. And he’s seeking students from all majors – engineering included – to join the cause.

Student government records dating back to 1998 show no aerospace engineers having served as student body president at CU Boulder, Capeloto said, and few engineers involved at all -- despite the college being among the largest at the university.

“I would like to see more engineers and scientists being elected into office at all levels of government, and for me, student government is the first step,” he said.

Learn more about Capeloto and how to apply for student government positions:

What motivated you to run for student body president?

I was motivated to run for tri-executive because I want to increase engineering representation in CUSG, I want to be an interdisciplinary engineer, and I believe people from STEM backgrounds make good policymakers. CUSG's members typically come from majors like political science or international affairs, and engineers are critically underrepresented when we are the second-largest school within CU Boulder. I hope to change that through outreach to the engineering community and education on the many ways in which CUSG can enhance the student experience.

To me, being a good engineer requires more than just the technical abilities taught in school. Engineers need to be good communicators, negotiators and leaders. Those are all skills I needed to become tri-executive and that I plan to continue to strengthen.

What is your team most interested in accomplishing in the coming year?

Kavya, Taylor and I have identified addressing the mental health crisis at CU Boulder as one of the most pressing issues we would like to address. Through our conversations with students we know that now more than ever, students either do not have access to timely and adequate mental health resources, or they are not aware of the resources that exist for them. CU has recently made great strides in this area through increased funding for Counseling and Psychiatric Services (CAPS), but we feel there is still work to be done.

Why should students, and engineers in particular, consider getting involved in student government?

Students should get involved with student government because it is one of the best avenues for facilitating change at our school and has a significant impact on our day-to-day lives. From the Rec Center to the UMC, CU student government funds a multitude of spaces and programs that are integral to our life as students.

We do this autonomously with our annual budget that sits around $25 million. We also influence the way CU operates through advocacy, representation, allocation and legislation.

It is easy to get involved through jobs on the executive cabinet and appellate court, or through running your own campaign for representative-at-large or school senator.

Student Government is also a great learning opportunity. We get real-world experience working on a team and with administrators in a setting many engineers do not see at internships or in class.

What else do you enjoy outside of class and serving in CUSG?

Outside of class and serving as student body president I enjoy spending time in Colorado’s mountains. Whether it is skiing, fishing or hiking, I find a lot of value and peace in getting away from the extremely fast-paced life in Boulder. I enjoy reading as well – non-fiction usually, but not textbooks.

What type of career path would you like to pursue after graduation?

When I first got to the University of Colorado, I thought I knew I wanted to work in planetary exploration. However, as I have been exposed to more of the industry through internships and the Designing for Defense course, I have discovered that while I still have a deep passion for cutting-edge aerospace engineering, I am also intensely interested in the cutting edge of national defense and intelligence.

Eventually, I would like to work on defense policy either in the government or for a private advisory group.

The University of Colorado Student Government, or CUSG for short, is the official governing body of the nearly 34,000 students at CU Boulder. As one of the most autonomous student governments in the nation, CUSG is responsible for allocating $25 million in student fees to improve the lives of all CU students.

CUSG seeks to make a meaningful impact on the lives of CU Boulder students through advocacy, representation, allocation and legislation. Open positions include director of student engagement, director of diversity and inclusion, appellate court justice, and many more.

All positions in Student Government are paid, and it is a great opportunity to use your experience and passion to bring change to the CU community. Be a part of the team, serve your peers and make a change!