Cody Watson, a rising senior in aerospace engineering sciences, has been named a winner in the Council on Undergraduate Research’s Student Video Competition. 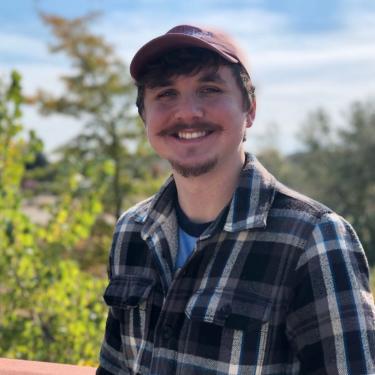 At the end of the project, Director of Active Learning Sharon Anderson encouraged Watson to enter the video competition. The entries were judged on everything from project methodology to how clearly they presented the findings, and Watson was one of seven winners chosen to receive a scholarship.

We asked Watson to share a bit more on his experiences as an undergraduate researcher:

How did you get interested in doing research as an undergrad, and how did you learn about DLA?

I am always looking for ways to learn new things in different work environments and expand my knowledge base in my field! I have been a part of many different programs, teams and projects throughout my undergraduate career so far. However, I hadn't yet explored research and thought, ‘what better way than DLA!’ I had seen some emails from the department about the opportunity, did a little bit of research into the different projects that were available, and found that there were some related to bioastronautics. As an aspiring pilot, I thought it was the perfect opportunity to get a jumpstart in that area of study.

This project was obviously a big team effort – can you tell us a bit more about your specific role?

My role in this project has primarily been divided into two main parts. The first part of this study was used to show that stochastic resonance (SR) can lead to perceptual improvements in a human’s ability to hear, see and touch. For this section of the project, I acted as a researcher, helping to run the experiment outlined in the video. I worked with human subjects, ran experiments and assisted the graduate students and my advisors in any tasks that they needed me to.

There was, however, a second part that I didn’t have much time to discuss within the time constraints! In alignment with the research that I outlined in the video, I also assisted in developing the next step of this research. Using the results mentioned in the video, I helped design an experiment to see the effects of SR on astronauts’ cognitive performance, such as learning, thinking, reasoning, remembering, problem-solving and decision-making using the Aerospace Research Simulator (AReS) at CU.

What was the most fun or interesting part of the project for you?

So far, the most fun part of the project has been utilizing AReS, a model of the Sierra Nevada Dream Chaser Spaceplane, for a large portion of my research efforts. It really is a blessing to have such amazing tools and analog cockpits available for students, especially to undergraduate students, and really made me feel as though I was a part of something larger than myself!

Did participating in this research project affect your future goals as an engineer?

I would definitely say that my experience on this project has been overwhelmingly positive and has allowed me to learn an incredible amount about what research truly entails and how you can make the most of it. Being around people who are so passionate about human spaceflight and simply pushing the boundaries of human ability is refreshing, and I discovered that this field is absolutely something that I want to explore more of, especially aviation and human factors. It’s just fascinating to think that we, as humans, are the limiting factor in most cases! I love thinking about how we can push the limits of human ability by improving how humans interact with machines and by improving humans themselves.

Are you interested in continuing on as a researcher?

I am more than interested! I was recently admitted into the Bachelor’s-Accelerated Master’s (BAM) program and hope to continue in similar research as I finish out my undergraduate courses and as I continue into my fifth year master’s courses. As someone who is a huge nerd for anything aviation, I hope that I can take the things that I have learned and apply them to push the limits in this field of study.