In Colorado’s craft beer industry, precision is required and innovation is mandatory. CU Engineers bring both in spades.

Meet a few of our local alumni brewers and learn how they’re engineering a better brew. 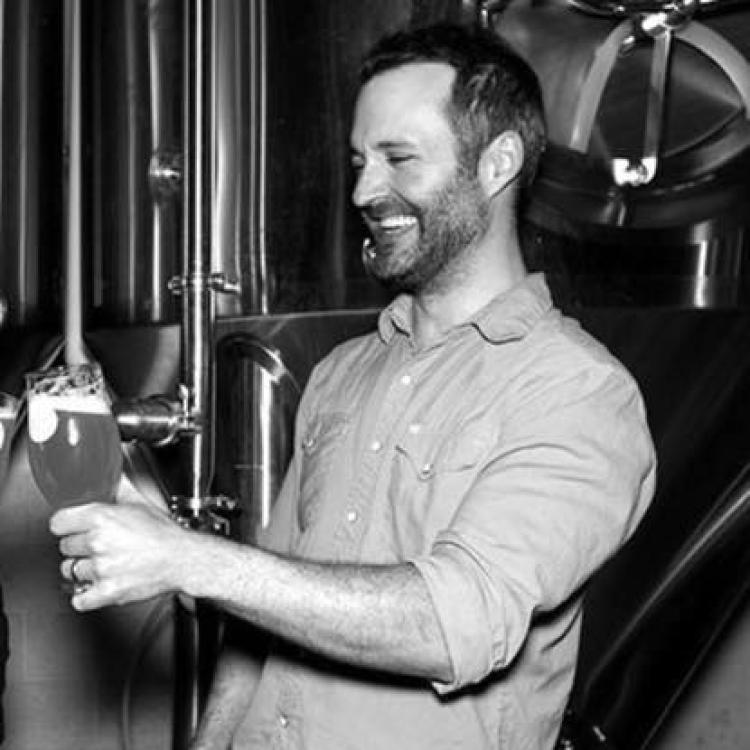 After working in Chevron’s plastics division, touring the world in a punk rock band, a stint in Cirque du Soliel (though not as an acrobat!) and seven years in film production, starting a brewery must have seemed somewhat tame for Jason zumBrunnen (ChemEngr’97).

“As my mom says, hey, you’re finally using your degree,” zumBrunnen said. “It’s probably the most I’ve ever used my degree.”

A Fort Collins native, zumBrunnen was first introduced to the possibility of brewing while touring Boulder Beer during a food science course. Soon after, he and a roommate purchased a homebrew kit and promptly started producing “really terrible beer.”

After school, he toured with his band, The Fairlanes, full-time for three years and off-and-on for another nine. From Japan to Europe and across the states, he observed how live music and beer worked hand-in-hand to bring people together.

ZumBrunnen was working in post-production with film companies in Los Angeles and drinking Oskar Blues’ Dale’s Pale Ale–the first craft brew to be canned–when he began to realize Colorado was at the brink of a craft beer revolution.

“It re-piqued my interest, and I started thinking, that would be great, to open a brewery and to move to Denver,” he recalled.

In the five years since its debut, Ratio Beerworks has become a destination in Denver’s RiNo district. The airy, colorful indoor-outdoor taproom features long tables for gathering friends and prizes connection, community, music and the arts.

Reflecting on his engineering training, zumBrunnen said one of the most important things he learned at CU Boulder was the importance of not becoming too narrowly focused. 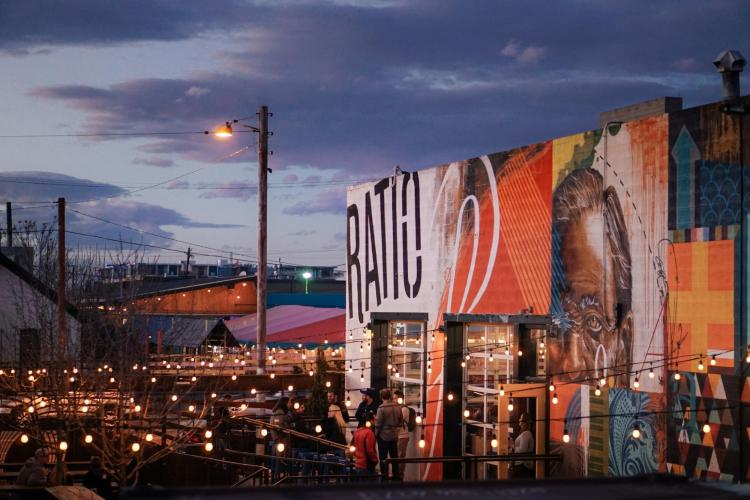 “I always try to have a balance, especially in engineering,” he said. “I almost forced myself to play music while in college. It was my break to try to balance my brain out a little bit.”

Seeking complementary and divergent skills led him to connect with business partners Zach Lowery and Scott Kaplan, a graduate of Leeds School of Business, in operating the brewery. It also pushed zumBrunnen to consider that his technical background wasn’t all he could offer.

“You sometimes pigeonhole yourself because you think, I’m this engineer, I’m analytical, I can’t be the one to go talk to someone about raising capital,” he said. “But in all actuality, it’s about getting exposed and knowing your project well.”

Ratio's availability during COVID-19
Pick-up and free delivery is available to Front Range customers near the brewery at 2920 Larimer Street in Denver with limited hours while Colorado continues social distancing. Apparel, glassware and gift cards are available in the online store. Visit ratiobeerworks.com for menu and hours. 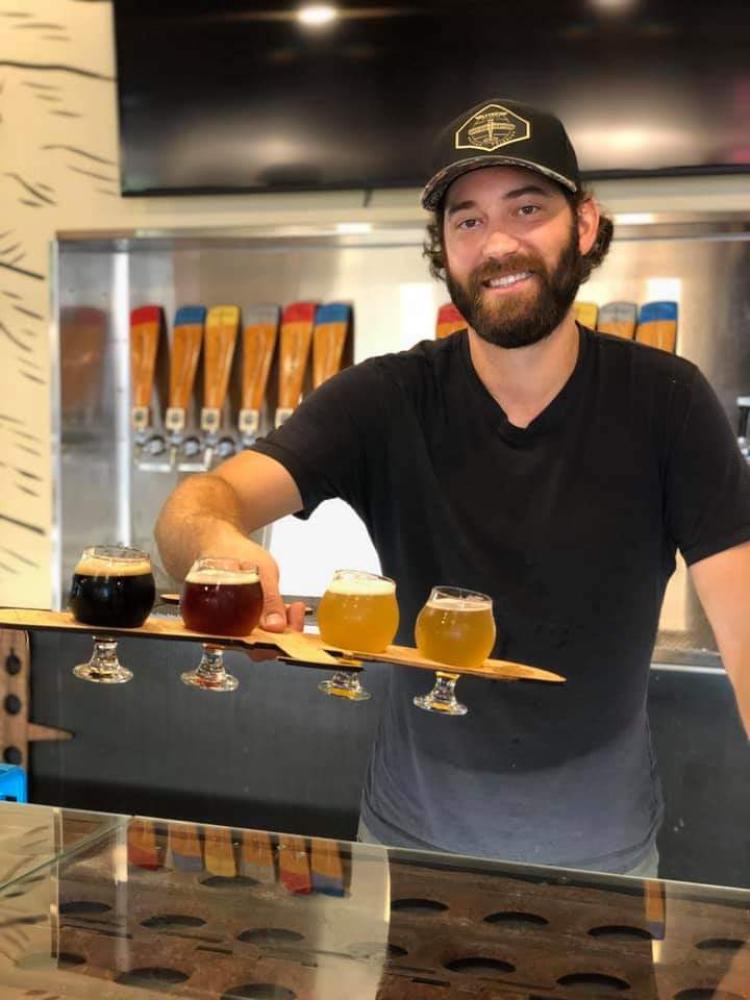 Jason Slingsby serves a flight of beers at FlyteCo.

It sounds like the start of a bad joke: a rocket scientist and a chemical engineer walk into a bar. It’s actually the daily routine at FlyteCo Brewing, a 1-year-old Denver microbrewery started by two engineering alumni.

Broomfield native Eric Serani (AeroEngr’11) and Jason Slingsby (ChemEngr’11), who hails from South Dakota, met at CU and quickly bonded over their love of flying. In 2008, they found one more shared interest when a homebrewing kit became a joint obsession.

“Only about five things went wrong; it was great,” Slingsby recalled. “We quickly decided we loved it and just dove in.”

After graduation, they parted ways for separate jobs and Serani briefly moved away from Colorado. They later reconvened with the goal of writing a business plan and looped in Morgan O’Sullivan, Serani’s neighbor. The trio would throw giant parties (with homebrews, of course) for 200 friends in their bordering backyards in the Highlands area, and friends swore they would invest if the three would form a business.

“That kind of got the mind thinking that if we’re going to do something like this, let’s do it while we’re young and make mistakes while we’ve got some time to recover from it,” Serani said. “We don’t want to live the rest of our lives thinking, what if we did this?”

The brewery opened in March 2019 in Denver’s Berkeley neighborhood, the historic building decorated nose-to-tail with aviation gear. The floors are painted with runway markings, and a mock airplane fuselage provides a cozy lounge in the center of the taproom, among other more subtle nods to aviation.

Trained for problem-solving, the engineers found that do-it-yourself was not only possible but practical as they opened the business. They manufactured their own taster trays, designed a temperature controller for the refrigerant system using a basic Raspberry Pi, and built their own keg washer.

As a result of those cost savings—and their personal devotion to the cause—FlyteCo is able to support several aviation-related charities and nonprofits, including those that encourage the next generation of pilots. 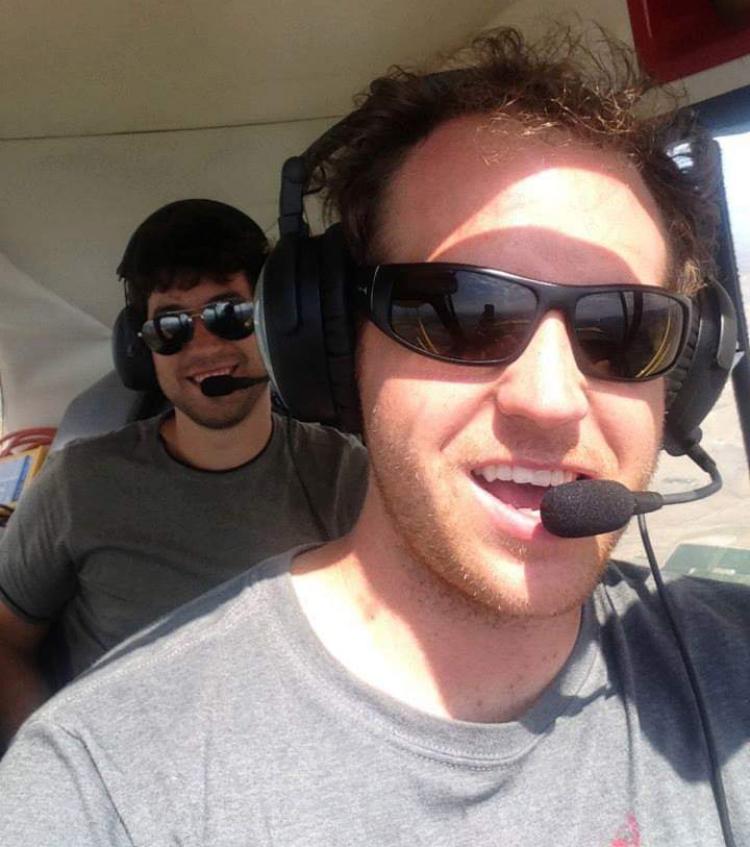 “As important as the beer, as the space, as the community we’re building, we want to promote and engage people in aviation,” Serani said.

Finding a balance between work and play could be challenging in the beer biz, but Serani and Slingsby said their CU Engineering days taught them how to balance the two.

“It was kind of a wakeup call to how things work in the real world,” he said. “You can have the best idea in the world, but getting a team to build something together is often a bigger challenge than the technical problem itself.”

His advice for future engineers? Look for collaborators who round out your own expertise.

“We all teach each other skills that we normally would not have learned if we had followed our traditional paths,” Serani said.

FlyteCo's availability during COVID-19
Drive-through and to-go beers are available from the taproom at 4499 W. 38th Ave. in Denver. Swag and gift cards—even beer soap—are available in the online store. Visit flyteco.beer for menu and hours. 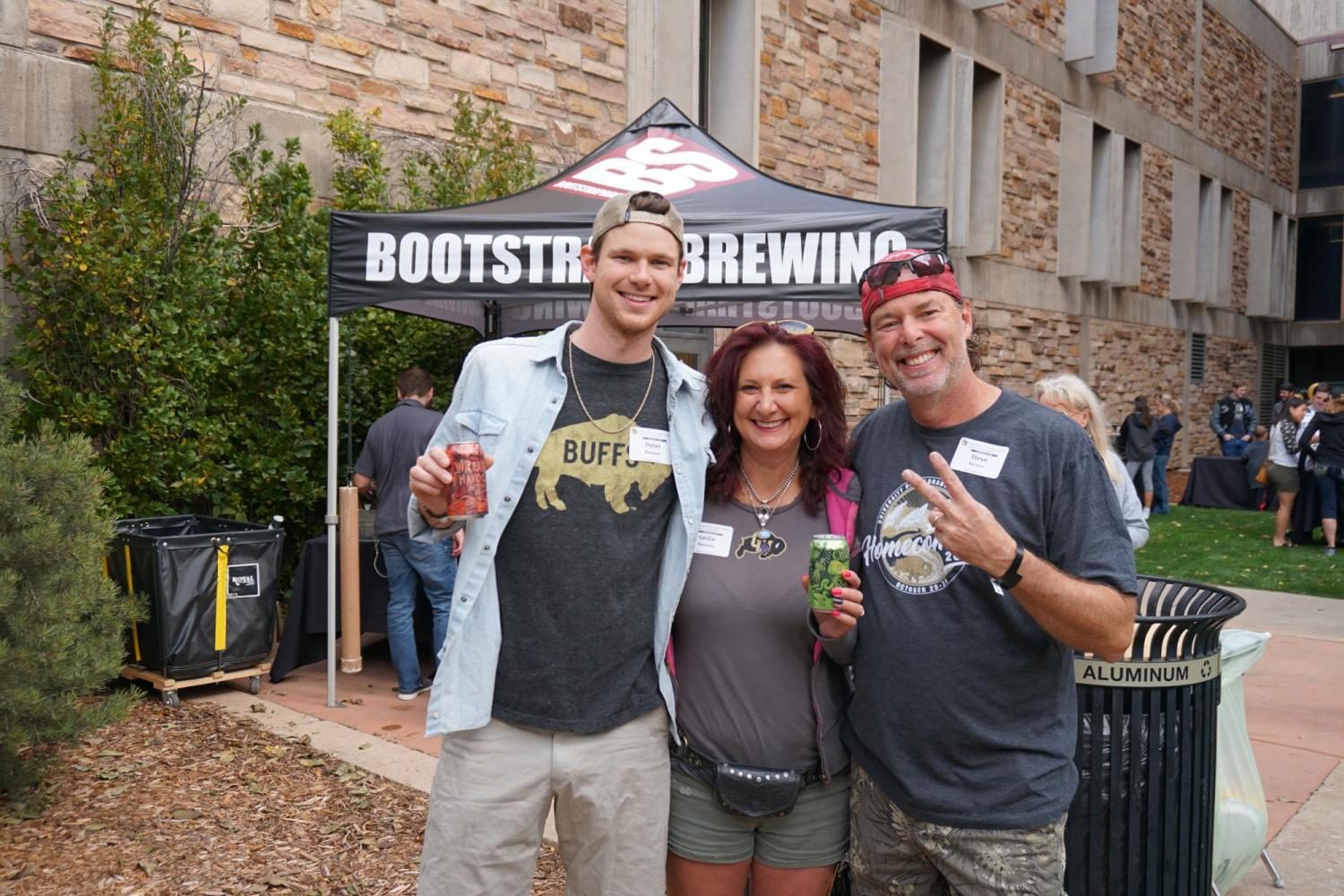 Steve and Leslie Kaczeus and their son, Dylan, of Bootstrap Brewing Company enjoy a beer at CU Engineering's Homecoming tailgate in fall 2019.

After decades advancing in the high-tech industry with disk drive manufacturers, Steve Kaczeus (MechEngr’82) felt the time was ripe for a change. He and his wife, Leslie, always dreamed of starting a business but hadn’t yet landed on the right idea.

Having already experimented with homebrewing as a creative outlet, Kaczeus decided that completing brewing school would help determine whether he should transition from hobbyist to professional. When the training ended, they knew it was time to commit to a radical change: Go all-in opening a brewery, or pack their bags and relocate to the Caribbean?

“Those were the options,” Kaczeus recalled. “Where we screwed up was, we didn’t open up the brewery in the Caribbean.”

Decision made, the couple located a small facility in Niwot and began purchasing equipment, conducting final research and preparing to launch. Boosted by a fortuitous early exit package from Seagate, Kaczeus and family opened Bootstrap Brewing Company in 2012.

The operation started small—a three-barrel brewhouse in the back of a building with two other tenants—but it fit Kaczeus’ desire to serve as Niwot’s neighborhood brewery.

“If you wanted to find us, you really had to look for us, because our front door was in the back of the building. We had no advertising or anything like that, but people did find us,” he said.

Today, the business has expanded mightily. Three years ago they opened a production facility and taproom in Longmont where most brewing and packaging now takes place, and more than 10 Bootstrap varieties are sold across Colorado.

The consummate engineer, Kaczeus said he collects data religiously on brewing and canning processes and uses it to keep the brews consistent and high-quality.

“I carry all of that engineering discipline with me into the brewery,” he said.

As a student, Kaczeus said he worked hard in classes but also struck a balance with activities outside engineering: playing on CU’s varsity tennis team, attending football games and making friends through the fraternities.

“I think CU has one of the best engineering programs in the country, and I was lucky to be able to go through that process,” he said. “But I also found that I wasn’t just an engineer at heart. I also enjoyed the business side of things, the bigger picture.”

That foundation, plus years in industry, helped Kaczeus establish a laser-focus on quality, business acumen and enthusiasm for customer service. Just as important to his success, he said, was choosing a field aligned with his interests.

“If you’re really passionate about something and you put your mind to it, it’s amazing how addictive it can be,” he said.

Bootstrap's availability during COVID-19
Bootstrap offers to-go sales and online orders three afternoons a week at its headquarters at 142 Pratt St. in Longmont. You can also find Bootstrap at Colorado liquor stores and many grocery stores. Visit bootstrapbrewing.com for hours and more information, plus apparel and more.

The team behind Gravity Brewing, located in downtown Louisville, includes alumnus John Frazee (CivEngr’01) as founder and brewer, along with fellow alum Ryan Bowers (MechEngr’00) as managing partner. Their spacious tasting room includes games and bier garten, plus 18 taps ranging from lagers to ambers to IPAs to stouts and even a tart cherry dubbel. Visit thegravitybrewing.com for more information, including hours, online ordering (including local delivery) and to-go information.

Stem Ciders, founded in 2013 by Eric Foster and Phil Kao (MMechEngr’08, PhD’10), opened its first cider house in RiNO in 2014 with three ciders on tap. Today the growing cidery includes a production facility and restaurant, Acreage, in Lafayette, as well as a restaurant and bottle shop in Durham, North Carolina. Visit stemciders.com for more information, including to-go orders and gift cards.

Know of another CU engineering alum in the beer, wine or cider business? Let us know at engineeringalumni@colorado.edu!

Ratio Beerworks
Dear You
ABV: 5.5%
What started as a summer seasonal is now Ratio’s top seller year-round. This French Saison made with American Citra hops is dry and hazy with a touch of tartness. “It’s my favorite beer to share with people who say they don’t like beer but are willing to try,” Jason zumBrunnen said.

FlyteCo Brewing
Fog Delay Hazy IPA
ABV: 7.3%
Originally skeptical about the New England IPA or Juicy IPA fad, Eric Serani was hooked once they attempted the trend themselves.
“It is very smooth,” Serani said. “It’s got a great hop aroma but isn’t very bitter, so it makes it very easy to go down.”

Bootstrap Brewing Company
Lush Puppy Juicy IPA
ABV: 6.3%
Loaded with hops and offering a tropical, citrusy flavor, the Lush Puppy is complex but drinkable – and it’s gluten-reduced.
“From a technical perspective, Lush Puppy Juicy IPA was a totally different recipe and incorporated a unique brewing process. It took a year of experimenting and optimizing different batches before I was happy to release Lush Puppy in a can. It's a great tasting and very drinkable beer,” Steve Kaczeus said.