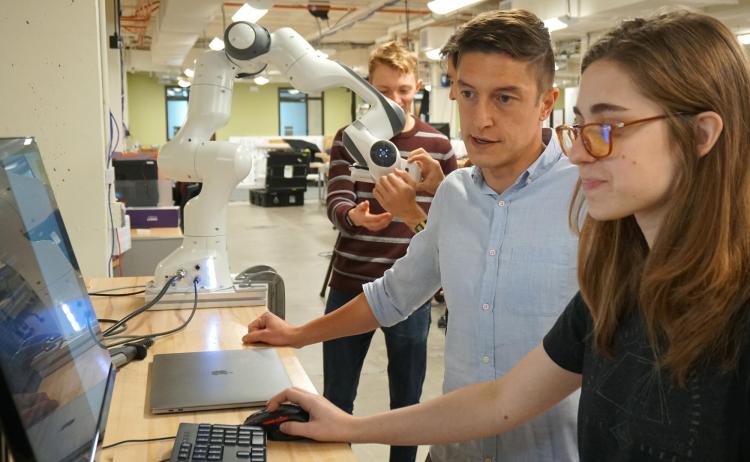 Header: Students working with the soft material in the lab. Above: Roncone talks with undergrad Ella Sarder about a problem.

The human skin is an amazing organ, with distinct tactile “sensors” for pain or pressure as well as a vascular system for power. Body hair can be used for perception as well, with airflow around it allowing us to perceive objects and people at a distance.

Assistant Professor Alessandro Roncone finds all of it inspiring, both for its compact and layered functionality, and for what it could teach us about the potential of robotics.

“Touch is the most important, powerful and fundamental way we communicate as humans and interact with the world around us,” he said. “Up to now, robotics has been focused on using sensors such as cameras and lidars to do that instead.”

Roncone, along with a talented group of researchers across the college, is trying to change that by creating skins for robots to maximize their local sensing capabilities, improving operational safety and human-robot interaction along the way. The goal is to create a soft multi-functional layer that can be placed on robots, containing sensors that measure pressure and proximity along with a host of other features inspired by the properties in human skin.

The idea would be to fabricate and deploy these artificial skins quickly for different situations, such as advanced manufacturing, where robots are increasingly teaming with humans to get the job done. Right now, powerful robots that manufacture cars, for example, are governed by physical safety measures such as fences that keep humans out of dangerous areas but reduce range of motion for the machines. Digital safety measures, such as computer code, augment and reinforce those precautions, but the boundaries and actions imposed by them can be hard for human partners to understand, react and adapt to.

But what if we could put more or better sensors directly on the machines in places we haven’t before to monitor their speed, or how far human operators actually are from it?

What if humans could “talk” to their robot partners through touch as well as speech and movement?

“With a skin, you can have all of this actually on the robot – you don’t need more space for it, and you are creating more collaborative and naturally interactive robots. You are increasing safety and efficiency at the same time,” said Roncone, who is based in the Department of Computer Science. “With the skin we can overcome both these limitations.” 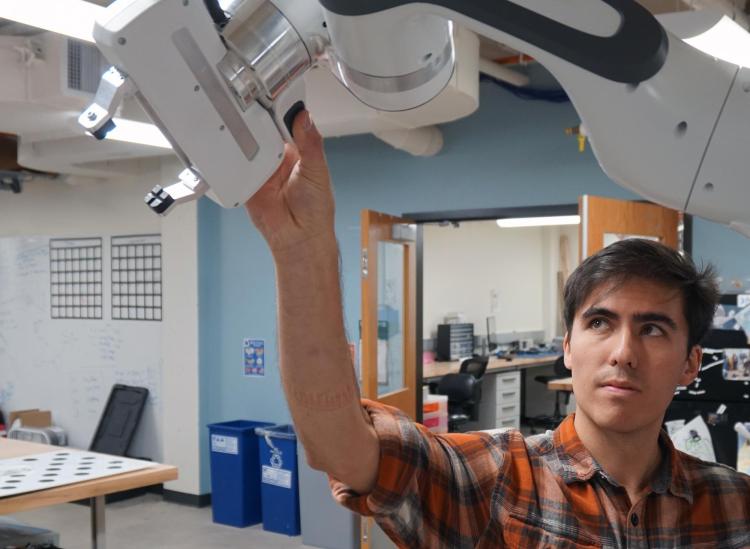 Nikolaus Correll is the director of the Multi-Functional Materials Interdisciplinary Research Theme and an associate professor in computer science. He said there are many people in the college working on this topic, creating a critical mass of support that has come together through the theme’s networking and seed grant activities.

“We have a good number of people who are interested in this topic, which spans from material science to the science of robotics, its applications and how it affects collaboration with humans,” he said. “There is a good chance such a group can then attract others who work on tangential problems. While that is the goal, we are not there yet.”

Correll is working with Roncone and Associate Professor Jianliang Xiao in the Department of Mechanical Engineering in this area. His company recently received a Small Business Innovation Research Award from the National Science Foundation to develop a proximity sensing skin, which he says will help the group.

“While it is hopefully interesting to industry to make robots more interactive and safer, the skin is expensive and difficult to fabricate right now. It will probably not reach its full utility without further research, and we plan to use what we develop as a basis for that here at CU,” he said.

Correll also pointed to Xiao’s other work with Professor Wei Zhang of the Department of Chemistry creating recyclable, self-healing e-skin that may one day lead to improvements in human health as ways research in the theme could overlap and build on each other in the future.

“Human skin is actually a perfect example of a ‘robotic material,’ and a robotic skin has a lot of utility to motivate such research,” he said.

New partnerships in this research area