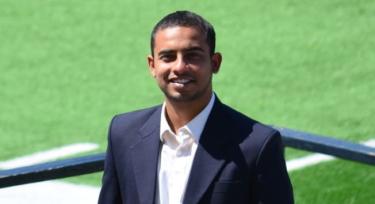 Today, about 1 percent of the world’s drinking water supply comes from desalinated seawater.

But due to factors like global population growth and climate change, the need to desalinate water from the ocean and other brackish sources is expected to grow.

University of Colorado Boulder postdoctoral researcher Omkar Supekar of mechanical engineering is working on a technique that could make desalination facilities more efficient by changing the way they detect chemicals that clog up their filters.

Desalination plants rely on membranes to filter out salt and other minerals. Typically, plant employees don’t know a membrane is dirty until its effectiveness is already compromised.

But Supekar’s paper, published today in the Journal of Membrane Science, outlines how Raman spectroscopy – a technique that uses light scattering for chemical analysis – can both detect membrane “fouling” in real time and immediately identify the chemicals causing the build-up.

Supekar said the technique not only helps detect scaling on the membrane surface in real-time, but also provides information about its location and chemical composition.

“Knowing what’s on the surface and where it’s located would lead to a more targeted membrane cleaning protocol to make membrane-based desalination processes more efficient,” he said. “Since our approach is based on optical phenomenon called Raman scattering, it can also detect organics such as biofilms and humic acids that are commonly encountered in groundwater filtration.”