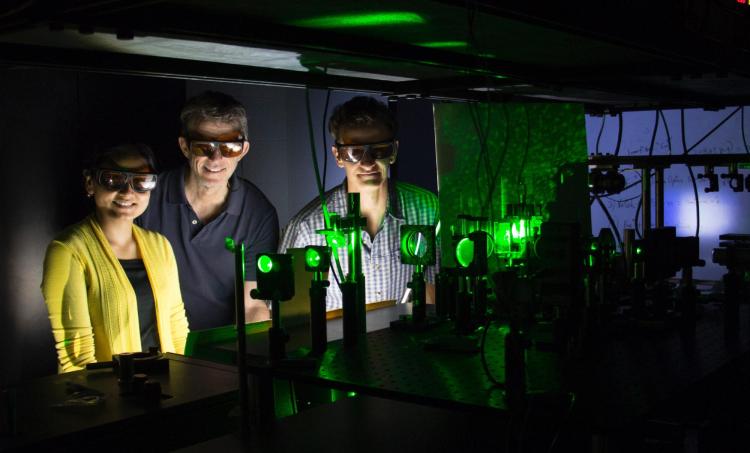 A new paper in Nature Photonics from researchers at CU Boulder details impressive improvements in the ability to control the propagation and interaction of light in complex media such as tissue – an area with many potential applications in the medical field.

Published Monday, the paper is titled “Wavefront shaping in complex media with a 350 kHz modulator via a 1D-to-2D transform.” The work was carried out in Professor Rafael Piestun’s lab in the Electrical, Energy and Computing Engineering Department. The team included CU Boulder post-doctoral researchers Omer Tzang and Simon Labouesse, researcher Eyal Niv and CU Boulder graduate student Sakshi Singh. Greg Myatt from Silicon Light Machines, a collaborating company in this project, also worked with the group.

Controlling the process by which light waves travel into and through complex media, such as blood and skin, is a growing area of research. Unfortunately, spatial light modulation devices, which allow this by varying the properties of a beam of light in useful ways, are limited in speed. This prevents real-time applications such as imaging of live tissue or through turbulent flow, which are constantly changing by the millisecond.

To address this, Piestun’s team has introduced a light wave control technique that is faster than any other available technology by more than one order of magnitude, demonstrating a record high-speed wave shaping.

Piestun said reaching this milestone required fundamental photonics and optical design, as well as hardware and software development to tailor a high speed, 1D micro-electro-mechanical device to the task at hand.

The applications of this technique are varied, including using multimode fibers as miniature endoscopes – medical optical devices used to look inside the body. By enabling imaging through multimode fibers, which are thinner and more efficient than existing endoscopes, this technique could open a window into previously inaccessible regions of the human body. Another intriguing application is in focusing light deeper into skin tissues for medical evaluation, said Piestun.

“If you try focusing a laser under the skin, you can currently only go under a millimeter deep. The idea is to go much deeper and this work could lead to that,” he said.