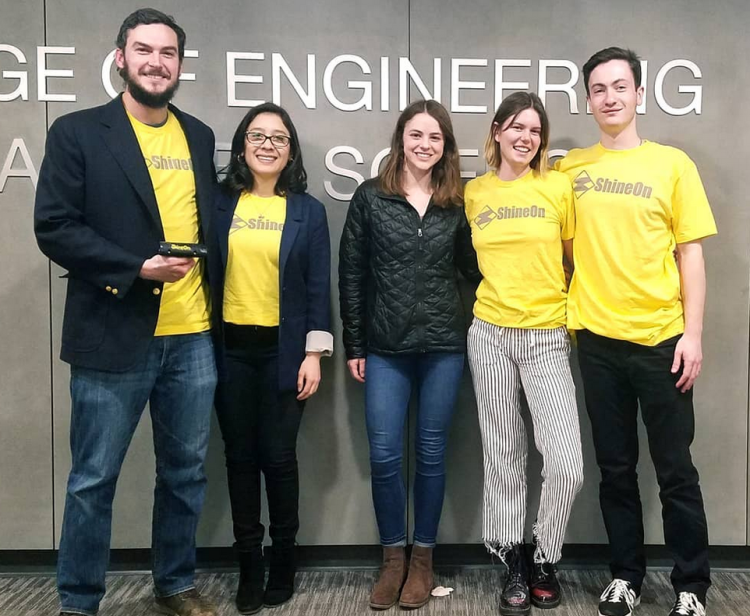 A year and a half after starting the company, CU Boulder startup ShineOn has grown to five employees and is preparing to launch its first product for cycling enthusiasts.

ShineOn’s first product, Dual Beam, is creating a new bike light standard that focuses on rider illumination, making cyclists feel safer on the road knowing cars can see them sooner and from farther away.

“I first thought of the idea for a dual-shining light riding down the same path I took every day,” said Alex Mulvaney (AeroEngr’19), inventor and cofounder of ShineOn. “Every day I would take the same bike path home, and every day a certain rider would pass me. It constantly blinded me, and I couldn’t help but think that his safety solution was making me less safe, and I thought there had to be a better way.  I was halfway home when it hit me: to see something, you have to shine light on it!”

For Mulvaney’s co-founder, COO/CTO Kathy Vega (EngrPhys’20), there was no question that finding a solution for bike commuters was a pressing and personal problem. As the first in her family to attend college and coming from a humble background, Vega found that bike commuting was an affordable and healthy transportation option.

“I was doing all the right things with using lights, a helmet, and following the rules of the road, but cars still didn’t recognize me with enough time to stop,” Vega said. “I knew that with our combined ingenuity and engineering skills, we had a shot at making something that could actually improve people’s lives and hopefully save some.”

Vega and Mulvaney first met while working on a satellite project sponsored by NASA at CU Boulder. When working with satellites, attention to detail is everything, so the skills used during this project directly applied to their future venture.

Vega, who previously taught in Los Angeles, California, is pursuing a second bachelor’s degree. As a first-generation college student, she was motivated to engage in socially conscious work and promote diversity in underrepresented decision-making environments. Bike commuting is a choice disproportionately preferred by men, which is why Vega seeks to find safety solutions that will empower more women and children to ride safely.

Mulvaney, who recently graduated with a degree in aerospace engineering from CU Boulder, studied business before working as a professional chef. As a student, Mulvaney was the program manager for a $500,000 NASA-sponsored satellite project. As a cycling commuter himself, he thoroughly understands the safety challenges a cyclist experiences daily. 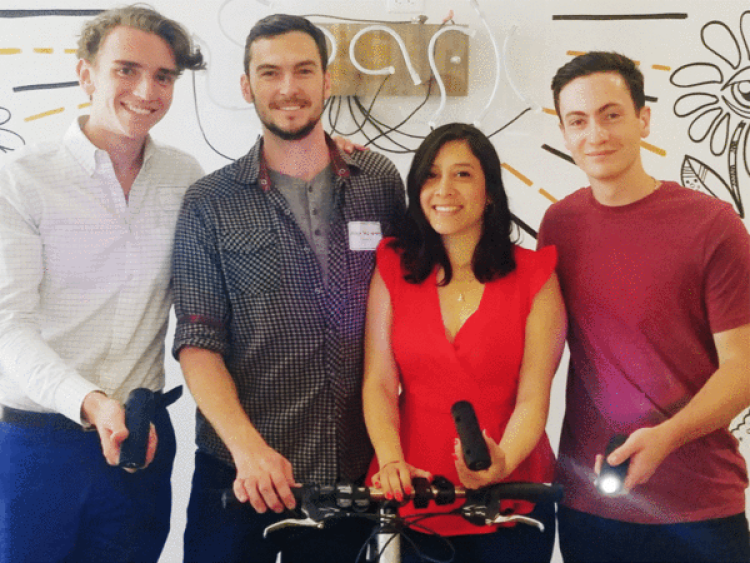 As the company continues to grow, the team has expanded, adding Luke Walker (MechEngr’22) as lead of engineering and Taylor Brooks-Murphy (Bus’22) as lead of marketing. Walker has developed designs for manufacturing, communicates with suppliers and manufacturers, and conducts thorough tests on ShineOn products to ensure specs are accurate and up-to-date.

Brooks-Murphy is a budding entrepreneur who has founded two companies and has previously worked on sales and marketing for a number of startups. As the marketing lead, he communicates with customers to ensure ShineOn is meeting their needs and leads marketing strategy.

Over the past 18 months, the team has completed a design and conducted hundreds of hours of real-world testing, attended dozens of events to connect with thousands of bike commuters across Colorado, and developed a loyal fan base through social media and newsletters. They also participated in CU Boulder's New Venture Challenge, coming in second place for the women's entrepreneurship prize and third place in the hardware track.

While participating in Catalyze CU this summer and building an expansive network of industry expert mentors and advisors, the ShineOn team is prepared to begin mass production by winter 2019. ShineOn is in the final stages of design for the front bike light and is expected to release a back light by spring 2020, with other safety products to come in the future.

ShineOn will launch its Dual Beam bike light through a Kickstarter campaign on Aug. 6.

Cyclist fatalities occur more frequently in urban areas, at non-intersection locations, and between the hours of 5 p.m. and 9 p.m. Mulvaney, Vega and all the ShineOn team members aim to save lives by reducing the risk of accident and fatalities bike commuters face.

“I noticed cars behaving differently,” said one user. “I can tell that they see me, which gives me great peace of mind."

To stay up to date on ShineOn, visit www.ShineOnBikes.com.