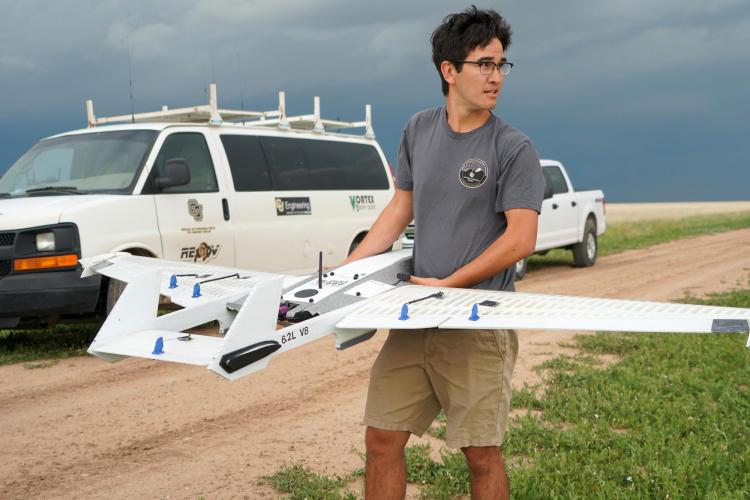 Alex Hirst saw his first tornado recently, followed quickly by his second, third, fourth and fifth. As an aerospace PhD student and Smead Scholar at the University of Colorado Boulder, he played an active role in the 2019 TORUS project – which took a team of researchers out across the high plains for the largest study of supercell thunderstorms ever.

The goal of the two-year project is to learn more how these storms form tornadoes and eventually to increase tornado warning times. Faculty, staff and students from the College of Engineering and Applied Science are at the heart of it all.

Now safely back in Boulder, Hirst reflects on the experiences:

How long were you out in the field?

May 13 through June 16. We started in Salina, Kansas, and went everywhere from Nebraska, to the Texas panhandle, to eastern Colorado. It was over 50 flights, over 40 hours of flight time. The last time a mission of this scale was conducted was Vortex II back in 2010, and we have literally an order of magnitude more flight data than those previous studies.

It was an incredibly active weather season. The fact that we were ready for it is what made TORUS so successful. It’s not just that all this weather happened, but we were also able to fly and collect all of this data. 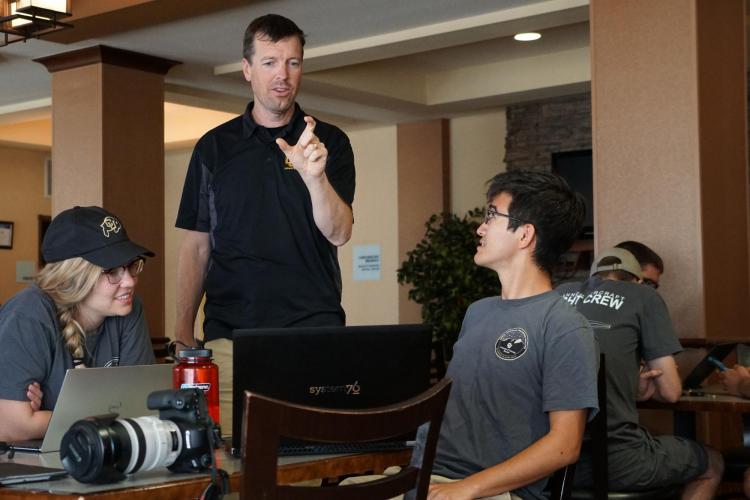 What was your role?

I just finished my first year as a PhD student, so being involved on a project of this scale and of such importance was really amazing. The fact that Professor Eric Frew gave me this opportunity is awesome. Sara Swenson (a fellow aerospace PhD student) and I were in charge of all the data handling. Our mission in the field wasn't to just “fly airplanes,” it was to collect data. We had the very important job of getting the data off the airplanes, processing the data and storing it.

For the day-to-day operations I was part of the flight crew. Every day we wake up and start working on the airplanes, doing pre-flight checks, any repairs, making sure all the sensors are calibrated and working, making sure all the SD cards are wiped so we don't lose out on any video or data. Then we spent all day driving/flying. Just flying, per aircraft, it takes a team of four.

Did you know how much was involved in flying drones like these before this?

I really didn't. I hadn't seen one of our RAAVENs fly before the deployment. My primary duty is as a data scientist, so my preparation for the mission was writing code to process data and to visualize it. A lot of the hands-on work was new to me. Learning that in the field was a little stressful, but mostly exciting. You have an idea in your head of how it's going to work, but it almost never goes exactly to plan so you're kind of adapting, and after a few days the team falls into a rhythm of who does what at what time and it works itself out.

What surprised you the most about being in the field?

I was really impressed with the capabilities of the aircraft. They were incredibly reliable. They're made of EPS foam. You wouldn't expect it to be as strong as it is. We're flying in pretty harsh conditions for an aircraft with a six-foot wingspan. It’s taking gusts in excess of 50 miles per hour, plus the rain and hail, and on top of all that when we land, we belly land. We don't have landing gear. So every landing is kind of a crash landing.

Through it all, we had to switch out a couple airframes, but whenever we were asked to fly we were able, and I just thought that was really impressive. Especially when I’d heard stories from past generations of students; people said a lot of it would be waiting and doing repairs.

The previous aircraft that we used tended to be a little finicky, but these newer aircraft are like tanks. That allowed us to fly a lot, and when you fly a lot, everyone is engaged all the time so it got to be really an exciting campaign because we were just doing so many flights and collecting so much data.

Facebook Live Q&A with CU Boulder aerospace PhD student and Smead Scholar Alex Hirst and other members of the TORUS team while working in the field outside Perryton, Texas.

What is being done with the data now?

Eventually the data won't be used by aerospace engineers; it will be used by meteorologists and atmospheric scientists. Once we’re finished going through everything, the data will be uploaded onto a repository where severe storm researchers will be able to access it and incorporate it into their numerical models and hopefully learn from it.

Sara Swenson is working with an undergraduate student now to conduct final tests on our multi-hole probe, which gives us three-dimensional wind data. She's trying to calibrate it so that we can go back into what we collected and do post-processing to make sure that all the data is truth – that it doesn't have any calibration errors. Then we'll upload it to that data repository.

My understanding of it is that these in situ measurements are really useful to scientists doing numerical weather models because you can check your models against actual measurements in the air.

When you decided to go to CU Boulder did you know you’d be going out on field missions like this?

It wasn't something I knew I was going to be doing, but it was something I wanted to do. I'm really interested in robotics and autonomy for civil/science purposes. I think there's a lot of potential for drones to help us better understand our environment and the impact we have on it, and hopefully that information will allow us to create positive change in the world.

When I was researching schools and found Frew and read about his work using drones – intelligent drones – combining that with autonomy to do science, I just thought: “This is perfect.” I want to be in the field; I want to be using this technology to help people.

It's cool, but scary. I’d never seen a tornado before this season, and I think I ended up seeing five or six. On one hand it's this crazy weather phenomenon, just seeing massive cyclones spawn these tornadoes is incredible, but at the same time it's really dangerous. A lot of people get put in harm's way because of tornadoes. Their houses might be in the path of the tornado we're studying. So, there's this sort of dichotomy of, “this is cool science,” but also at the same time, “I hope no one gets hurt.” Hopefully by us being out there and taking this data and studying it we’ll be able to better help people. 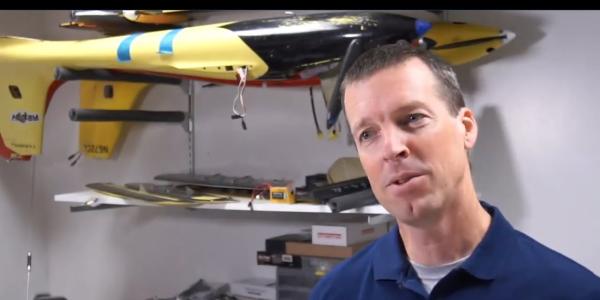 OnCue talked to Professor Eric Frew about how drones are contributing to cutting edge storm research, long travel days with the project, and expectation versus reality in the '90s classic tornado movie "Twister." END_OF_DOCUMENT_TOKEN_TO_BE_REPLACED 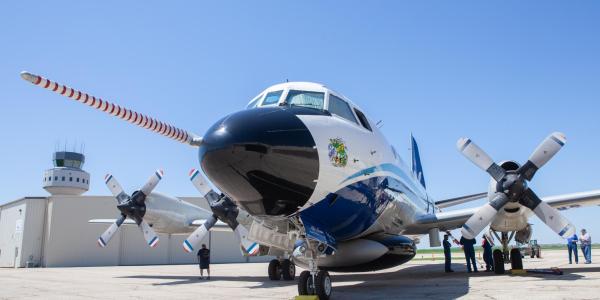 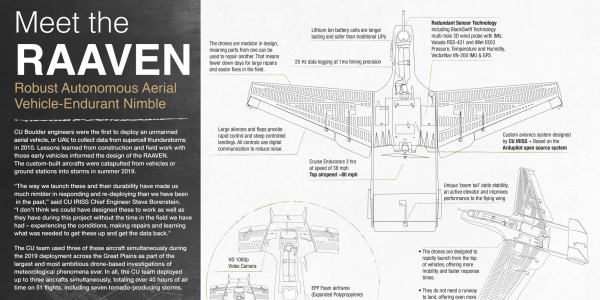 CU Boulder engineering has a long history of using drones to study severe storms and tornadoes. See the technical specs for the RAAVEN, the most flexible and sophisticated tool ever used for this kind of work here. END_OF_DOCUMENT_TOKEN_TO_BE_REPLACED