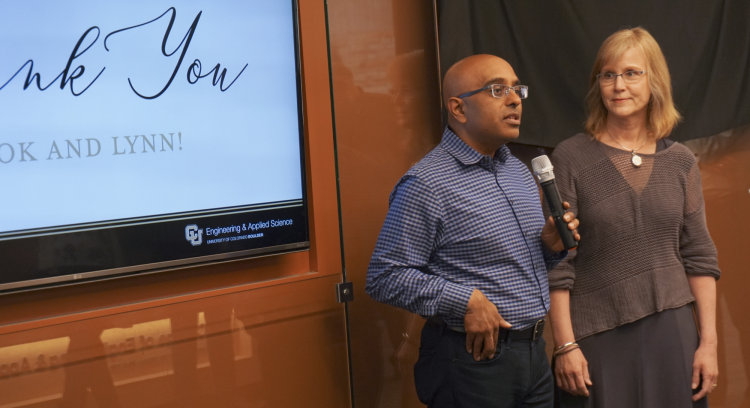 Srivastava and Waelde at the ceremony dedicating the Engineering Center Lobby in their honor.

The couple met while working on their PhDs – his in electrical engineering, hers in psychology – when a mutual friend directed Waelde to Srivastava for a data analysis problem.

“I remember Lynn telling me about the specific statistical modeling technique she wanted to use. I said – apparently with a swagger, according to Lynn – that ‘I do that for a living,’ and the rest is history,” Srivastava said.

The two went on to spend hours working on their dissertations together in the Engineering Center.

“We would usually start working in the morning to meet a deadline, but then right around 2 p.m., she would say, ‘I’m going to get a hot drink,’ and we would inevitably go together to the lobby and get her a cup of coffee,” Srivastava remembers.

So it’s fitting that, in recognition of the couple’s recent gift to the College of Engineering and Applied Science, the lobby was designated the Srivastava-Waelde Engineering Lobby on April 25.

The Power of Scholarships

The gift from Srivastava (ElEngr’91, M’93, PhD’96) and Waelde (MPsych’91, PhD’95) will support scholarships for students in aerospace, electrical and mechanical engineering or computer science who are involved in organizations promoting a diverse student body, including the BOLD Center.

That final scholarship requirement, Srivastava said, also stems from his time here. When he arrived at CU Engineering for his freshman year in the late ’80s he says he was surprised at the lack of diversity.

“I saw that many women students were leaving the field and that students from diverse backgrounds were either changing majors or leaving the university altogether,” he said. “At the time, I didn’t really understand all the factors that were leading to these outcomes. I felt that if I ever had the opportunity to make a difference at CU to help drive more diversity and inclusion, I would want to be part of that mission.”

Srivastava, who has served on the college’s Engineering Advisory Council for several years, said he is impressed with the college’s current focus on recruiting and retaining women and underrepresented minorities. Waelde agreed, adding that she hopes their scholarships will help CU Boulder “change the face of education by driving diversity at all levels.”

“I was supported by the universities I attended (Louisiana State and CU Boulder) throughout the four college degrees that I earned,” she said. “Those were gifts that are very precious because they allowed me to focus my educational and life goals.”

The couple feels lucky to be able to give back to the school that led them to such successful careers. Waelde is a professor at Palo Alto University and an adjunct clinical professor at Stanford University School of Medicine, with teaching and research emphases that include meditation, trauma and PTSD. She said she wouldn’t have her career had she not been mentored by CU faculty.

“Dr. Louise Silvern, in particular, not only conveyed understanding about many important domains in psychology but also helped me learn to think,” she said. “That's a gift you can get best from a teacher and you keep it the rest of your life.”

Srivastava is a senior vice president and chief data officer at Intuit, where he is responsible for leading efforts in large-scale machine learning and AI across the enterprise. While his interest in machine learning started with a book his dad gave him in high school, his time at CU Boulder allowed him to follow his interests from control theory and space systems, to neural networks and artificial intelligence.

“CU gave me the best opportunity to learn these subjects but also to think about my future and the life I wanted to live,” he said. “I've worked in academia, at startups and major Fortune 500 companies, as well as at NIST and NASA. I think the education I received at CU was a key factor in my career development.”