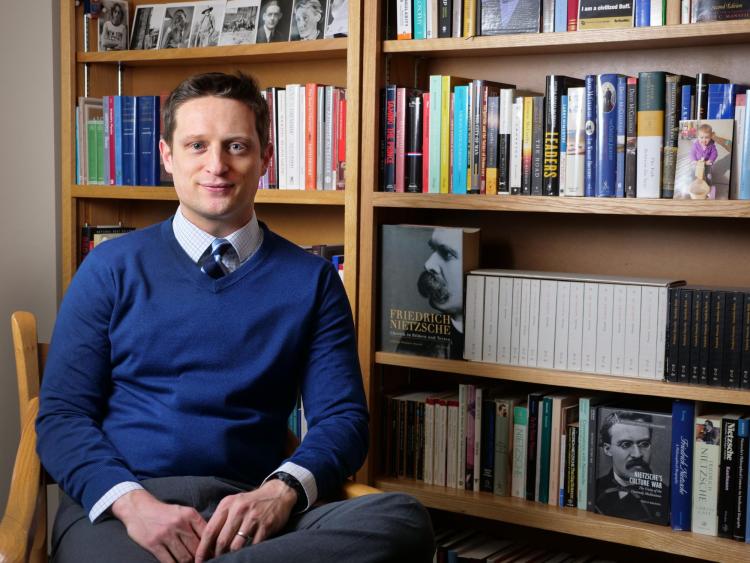 Shilo Brooks, faculty director of the Engineering Leadership Program, has been awarded a 2019-20 fellowship at the James Madison Program in American Ideals and Institutions at Princeton University.

Scholars in the James Madison Program are invited to Princeton to work on some aspect of American political thought or an interest that intersects with contemporary or historical concerns in American political history. As a visiting fellow, Brooks will spend 10 months on research for his next book, which will focus on the relationship between science and American democracy, and how that relationship has changed since America’s founding.

While at Princeton, Brooks will continue to direct the Engineering Leadership Program remotely.

It’s no secret that the American political structure is heavily influenced by social media. Much of today’s discourse about politics and questions of free speech takes place on Twitter, Facebook and other platforms instead of in the town square. Meanwhile, more young people than ever are encouraged to study STEM (science, technology, engineering, mathematics). This combination of scientific and technological citizenship deeply affects American political culture and American political thought, Brooks said.

“I’m in a unique position to think about America’s relationship to science and technology,” he said, “as a political scientist who teaches students interested in STEM, and who is trying to help them think through the leadership challenges that technology poses to maintenance of liberal democracy. Looking at America’s founding, what role did Jefferson, Hamilton, Madison—all of whom were scientific minds—think science should play in America’s political and economic development? How could science help enrich and sustain their great experiment in liberty, and is it still doing that today?”

Although not an engineer, Brooks, a political scientist and student of political philosophy and the history of science, is uniquely qualified to direct the leadership program at the CU Boulder College of Engineering and Applied Science. Designed for engineering students, the liberal arts leadership program introduces students to the complexities inherent in science and technology’s relationship to society. Brooks addresses the moral, social and political challenges facing future engineering and technology leaders.

The program seeks to cultivate engineering leaders of “curiosity and character” who combine the technical expertise with moral principles and political literacy to address society’s pressing scientific and technological problems.

Brooks came to engineering by way of the Herbst Program of Humanities in Engineering, where he taught a course on leadership rooted in political philosophy and history.

“When the (ENLP) position opened up, I think engineering wanted an expanded curricular vision for the program,” Brooks said. “The leadership course I was teaching in Herbst, and the writing I was doing on the cultural impact of modern science, seemed to make me a good fit.”

He made the pitch that since the Engineering Management Program was already a great place to learn the management skills necessary for today’s technical world, what was needed was a program entirely focused on the art of leadership.

“Leadership and management are sometimes thought to be identical endeavors,” he said, “but in my view they’re not. Management concerns the way in which organizations are managed and sustained. Organizational rules and policies are usually already in place for managers to adhere to. Leadership is something altogether different. It’s more art than science. It often involves creating rules instead of following them, and possibly even breaking rules in order to look beyond the horizon of management to the big social, political, and human questions that affect us all.”

The way to teach leadership to students, Brooks said, is by exposing them to great leaders of the past through literature, history, philosophy, biography and autobiography. This is his approach as a political scientist studying the history of political and scientific leadership.

In the Engineering Leadership Program, students learn that great leaders of the past were multidimensional people. The Wright Brothers studied art, literature, and natural history. Catherine the Great wrote fourteen comedies. Abraham Lincoln was a reader of Shakespeare. Winston Churchill painted 500 canvases.

“Leadership is an endeavor that requires intellectual agility, intellectual athleticism, and the development and use of all our human faculties,” he said. “Many of the greatest leaders and scientific innovators in history were polymaths. That’s what this program shows students. That’s why I’m here, as a political scientist interested in philosophy, and the history of politics and literature, teaching courses on leadership to engineers, programmers, and mathematicians.”

It all started with books

“It didn’t seem real,” Brooks said, when he learned about being awarded the prestigious fellowship. “I’m not a guy who grew up thinking he would have access to a place like Princeton and its resources.”

Brooks grew up in Lubbock, Texas. His parents divorced when he was an infant, and he and his mother at one point had to move in with his grandparents. Aspiring to make a better life for her son, Brooks’ mom, at age 41, went to nursing school at a local community college to become a registered nurse. Brooks remembers their struggle to make ends meet as his mother rebuilt a better life for them.

“To reach the heights of higher education is not something we ever dreamed I would be able to do,” he said. “My mom is very excited. I’m very excited.”

After a couple of unfulfilling semesters at Lubbock Christian University and Sam Houston State University, Brooks was able to enroll at St. John’s College, a liberal arts college in Annapolis, Maryland through the generosity of a friend’s father who helped pay his tuition. A voracious reader, Brooks was introduced to the Great Books of the Western World while at St. John’s, which fueled his interest in politics. He became captivated by such authors as Plato, Rousseau, Tocqueville and Nietzsche. He read The Federalist Papers, Frederick Douglass’ and Booker T. Washington’s speeches, landmark Supreme Court cases, great American novels, and Euclid’s Elements, Aristotle’s Physics, and studied Einstein’s theory of relativity.

“I started to see that authors like Aristotle and Nietzsche, who had written on politics, had also written on science,” he said, “and I began to wonder about the connections between science, politics and culture.”

Never dreaming he would go to “one of those fancy East Coast schools he’d read about as a kid in Lubbock,” Brooks was awarded a scholarship to do graduate work at Boston College.

“All of this is a testament to my mother’s insistence that I could do whatever I wanted if I tried hard enough, no matter how little money we had, who my father was or where I was from,” Brooks said.