When emcee Catherine Witt announced over the loudspeaker on Friday afternoon that the Engineering Projects Expo was over, her fellow students erupted in cheers.

And justifiably so – the announcement not only capped a long day of demonstrating their projects to visitors and judges, but also up to a year’s worth of hard work for many of the teams. 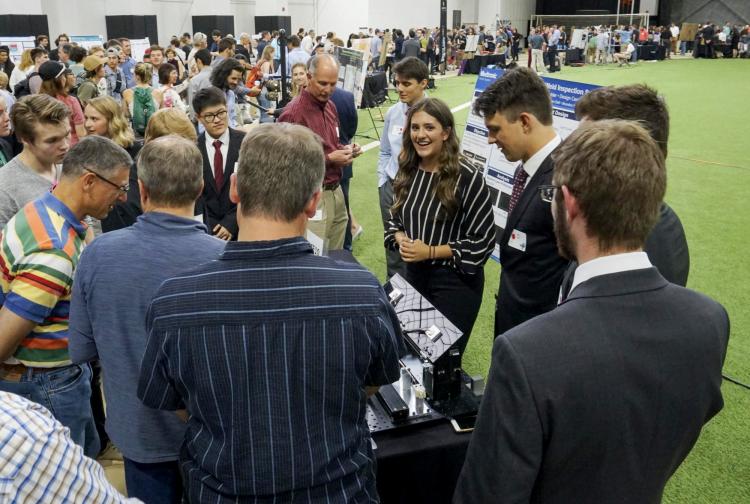 “Today’s Expo is a special celebration of everything that we’ve been working toward,” said Witt, a graduating senior in electrical, computer and energy engineering. “I hope everyone leaves inspired by what CU Engineering students can do.”

More than 140 student teams from six College of Engineering and Applied Science units ringed the Indoor Practice Field to show off their capstone and graduate projects, which Dean Bobby Braun hailed as “truly innovative” as he kicked off the awards ceremony.

Braun also acknowledged all the work that went into each project.

“You built things, you broke things, you rebuilt things – does that sound about right?” he said, earning a round of laughter from the assembled students.

Judges circled the track in the early afternoon, assessing the teams on their technical merit and presentations. Then the doors opened to family, friends and the general public. Attendees voted on their favorite projects via text in the People’s Choice category.

During the event, students also got the chance to chat with representatives of companies sponsoring projects during an informal networking event. Dennis Pretti and his colleagues from Micron Technology were organizing a big stack of resumes by the end of the afternoon.

“We hire from 14 different majors, and all but three of those are engineering,” Pretti said. “This was a good opportunity to have one-on-one conversations with students.”

This was the second year the college has hosted a college-wide project expo. The event is organized by staff from the Idea Forge, and brings together teams from aerospace engineering sciences; civil, environmental and architectural engineering; computer science; electrical, computer and energy engineering; mechanical engineering; and the ATLAS Institute.