CU is diving into the field of autonomous submarines

CU is diving into the field of autonomous submarines

CU Boulder researchers are taking a deep dive into the realm of autonomous submarines through a Small Business Technology Transfer contract sponsored by the Office of Naval Research.

The work, which entered phase two last month, pairs the University of Colorado Boulder Research and Engineering Center for Unmanned Vehicles center with Orbit Logic — a Maryland-based company with expertise in mission planning and scheduling across a variety of platforms and domains. The goal is to create autonomous submarines that can work together on long missions. That includes military applications like tracking an enemy or a scientific mission like exploring the sea floor.

Smead Aerospace Engineering Sciences Assistant Professor Nisar Ahmed said the work, titled Data Architecture Enabling Robust Cooperative Autonomy with Minimal Information Exchange, has been difficult but interesting because it is a new realm of operation for the team.

“Underwater is a totally new domain for us. There is a lot of commonality between what we are doing here and what we have done with autonomy in the air or the ground, but there are unique challenges that come with being underwater. Things like limited bandwidth, power availability and trouble with sensing,” he said.

Professor Sonia Martinez in the Mechanical and Aerospace Engineering Department at the University of California San Diego and SPAWAR Systems Pacific are also collaborating on the project.

The Small Business Technology Transfer program aims to “bridge the gap between performance of basic science and commercialization of resulting innovations” by linking businesses with researchers through federal dollars. In the program, federal funding from programs like the Department of Defense or the National Science Foundation is distributed as awards on a competitive basis. Funds given during phase one are generally used to establish technical merit, feasibility and commercial potential of the proposed research.

Phase one of this project showed:

Communication between underwater subs will be at the heart of the next phase, Ahmed said.

“Knowing what the vehicle is up to and where it is going — seeing what it wants to think about doing — is really hard,” he said. “Tethering them limits range and adds complexity. You want them to be autonomous, but also be in contact constantly. The other side of that though is that for military operations you don’t want them pinging constantly.”

Kenneth Center of Orbit Logic, the principal investigator on the research program, is eager about the work that will accomplished by the team in the next year.

“We are very excited about running this solution on real underwater vehicles. So often, fundamental research gets stuck in the laboratory without an opportunity to show its value,” he said. “This team will be demonstrating real capabilities, including using a Fleet Planning Tool to determine how a set of underwater vehicles can be configured to meet mission objectives – then load autonomous software onto the vehicles and see how well they do at meeting those objectives, even if unexpected conditions are encountered.”

Ahmed is part of the Autonomous Systems Interdisciplinary Research Theme in the college, and his co-PI Eric Frew is the director of the initiative. A new seed grant from the theme is attached to phase two and will be used to purchase an underwater vehicle for future testing. That vehicle will also be used in other research projects and by the student RoboSub team. 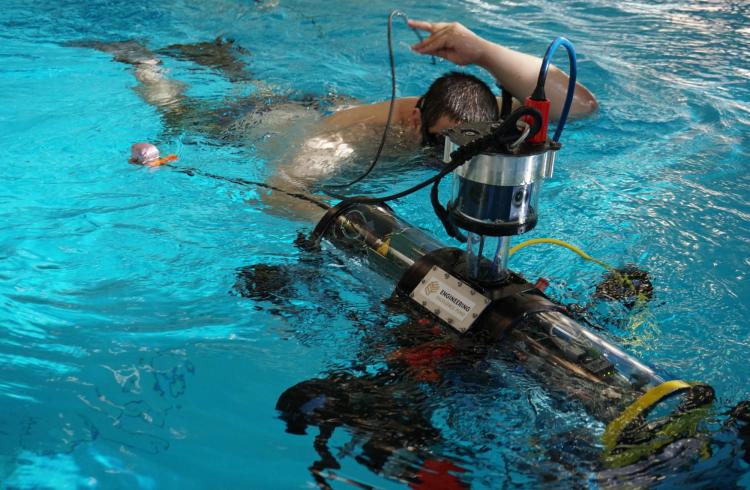 A RoboSub team member testing in the pool at CU Boulder.

“This project highlights how the Autonomous Systems Interdisciplinary Research Theme is helping CU researchers expand in to new areas,” said Frew. “The new hardware provided by the seed grant gives this project the ability to conduct testing in realistic conditions and supports other faculty who are expanding their work from drones and self-driving cars into underwater vehicles and spacecraft applications.”

The ultimate goal is to have multiple vehicles to explore questions around communication and user experience.

“We want to make it easier for anyone to use these things, so they don’t have to have 15 windows open on a computer screen to explore a lake. That is part of the commercialization aspect of this project,” Ahmed said.