“One of the nation’s most LGBTQ-inclusive campuses” 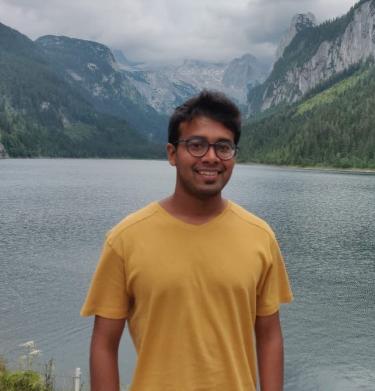 I was born in Guwahati, in the north-eastern part of India and grew up traveling all over north India from the eastern part to the westernmost corner of the country.

Some of my favorite family trips were to the mountains, where we would spend days immersed in the tranquility.

There, I could look up at the dark skies and lose myself for hours in wonder at all the stars that lit up the night.

By high school, I was sure I would either take up a career in aerospace engineering or astrophysics. This has been my driving force through all the important decisions I have made since then.

I think my most influential experience as an undergraduate was being part of the satellite team of my university, IIT Bombay. Spending day in and day out with like-minded people, who turned out to be the strongest pillars of my life, working towards a goal that would carry our names into space, was a pretty strong indication I was on the right path to what I was meant to do.

I was somewhat sure during my initial undergraduate years that I wanted to go to graduate school. Conducting research in my university as well as internships in the Indian space agency and the atmospheric physics lab of University College London (UCL) only served to reinforce that.

For anyone looking to pursue graduate studies in astrodynamics, CU Boulder comes up as a natural choice.

In addition to exciting astrodynamics research, the department seems to cover almost every aspect of aerospace engineering and sciences. So, when Dr. Scheeres gave me the opportunity to work in his lab, I was simply elated, to put it mildly!

He is definitely the best advisor I could ask for, giving his students enough flexibility to choose their own direction while ensuring they stay on the correct course. He is extremely supportive and has helped me grow by guiding me towards the right opportunities. It is something I have observed in all the faculty I have interacted with, and the department should be proud to have such strong professor-student relationships.

Here I was, in a place where I didn’t have to lie about something that is so fundamental to one’s identity

My decision to come here was also influenced by personal reasons. I knew CU Boulder as one of the nation’s most LGBTQ-inclusive campuses and Boulder itself to be a very liberal place to live in. Coming from somewhere that conversations around gender and sexuality are limited to select sections of the society and are generally considered taboo even by the highly educated, I had gone through some difficult times while dealing with my own identity.

Though I am fortunate to be surrounded by friends and family who turned out to be my staunch supporters, I dealt with depression when I initially came out to myself.

The move to Boulder was a liberating one. In the first few days, I became aware of all the efforts the CU community has taken to ensure the campus is a safe place for everyone. It is difficult to express in words how important it is for someone belonging to a minority group to be able to express themselves without fear of being judged, or even worse, bullied.

Here I was, in a place where I didn’t have to lie about something that is so fundamental to one’s identity that most people don’t even stop to consider it.

There are people, with entirely good intentions, who don’t understand the need of conversations around diversity or the struggle to ensure these conversations take place at all. To them I say, step into someone else’s shoes and see the world through their perspective

I am glad to be part of a community that works towards achieving an environment where an individual can live up to their full potential and where one stands out not for being different but due to the difference their work brings to society.