For Dave Hunt (MTele’79), taking an early retirement meant the opportunity to pursue two of his passions — art and genealogy.

Dave retired from Texaco Oil in the late 1990s after the company asked him move to Houston. He and his wife, Joyce, who had moved here from Montana in the late 1970s so that Dave could pursue his graduate degree in the Interdisciplinary Telecommunications Program, weren’t about to leave Boulder. Joyce loved her job as an assistant city manager in Thornton, where she still works today, and they had raised their children here. 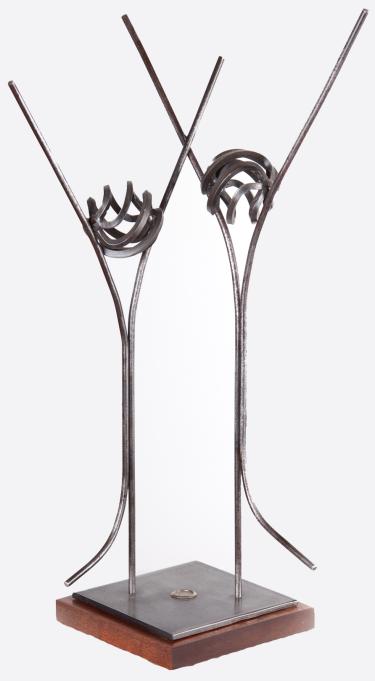 “There was no way we were moving from Boulder,” Dave laughs.

But his time at Texaco (formerly Getty Oil) had provided him with a skill he would take full advantage of during his retirement — they had supported him in spending two years at Ames Community College to learn welding.

That skill is on display throughout his house and yard, which are adorned with more than 40 sculptures, or his “artificial imperatives,” as he jokingly calls them. Many of them use items scavenged from their Montana ranch, like hood ornaments from antique cars, ornate door hinges and buck rake tines. He explores varied themes like challenging cognitive biases, the couple’s marriage and Norse mythology.

In his retirement, Dave has also spent a lot of time researching and writing about his ancestry. He found that many of his ancestors were Quakers, a discovery that has deeply influenced the couple’s life philosophy and their relationship with CU Engineering.

“(Quakers) talk the talk and walk the walk,” Dave explained, adding that Quakers were always on the front lines of taking care of the less fortunate, supporting education for everyone and promoting gender equality.

“The Quaker founder back in England wanted separate business meetings for the men and the women because he didn’t want men to dominate the meetings,” he said. “And that was in 1650.”

The couple sees that same need for equality in engineering, which is why they’ve been supporting scholarships for women in the College of Engineering and Applied Science since 2001. The most recent addition to this portfolio is a scholarship for women in the ATLAS Institute.

“We feel that women bring a different focus to science and technology issues, and that’s why we’re so supportive of women in engineering and the ATLAS programs,” Dave said. “We need more women in engineering because they bring a component that a lot of the men don’t bring.”

Dave and Joyce enjoy hosting the scholarship recipients at their house for brunch and learning about their varied backgrounds and goals.

“A lot of them have been first generation and minority students,” said Joyce, who particularly remembers a student from Russia who was getting a triple degree while raising her daughter. “The kinds of things that they’ve gone through are just amazing.”

Dave said the students are pretty candid when he asks what it’s like to still be the only woman on a project team.

“There are still a certain amount of challenges for women in the engineering field,” he said.