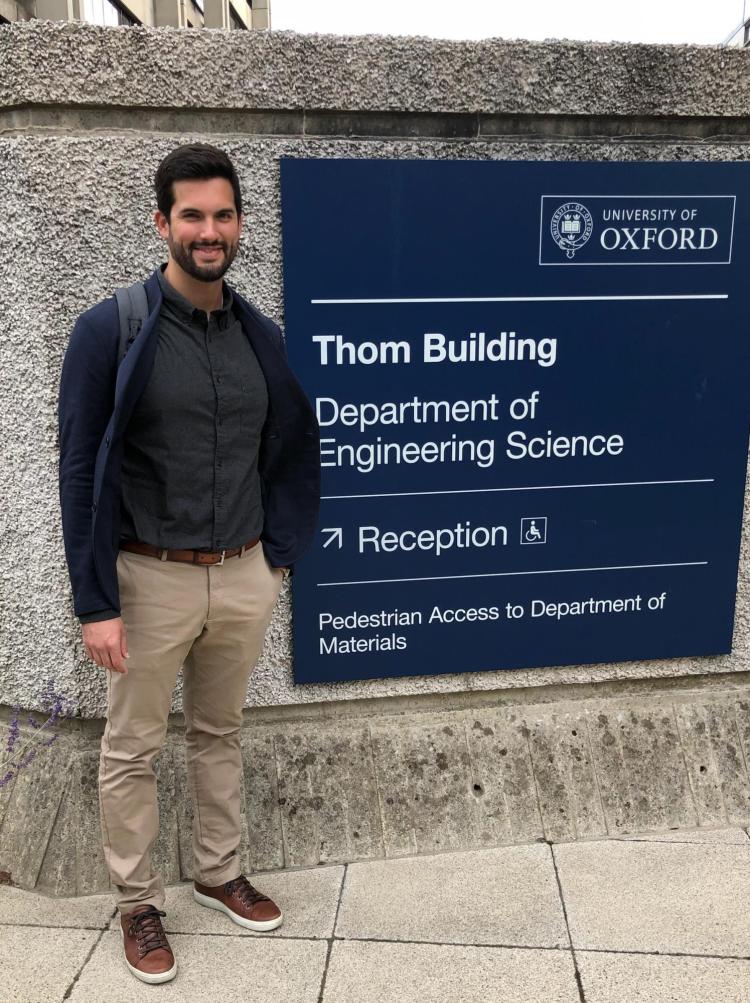 Alec Thomas is hoping the research he conducted as a PhD student at CU Boulder will help him solve one of the big problems in the targeted delivery of therapeutics at his new position with the University of Oxford in England.

Thomas began his doctoral training under CU Boulder Associate Professor Mark Borden, a member of the Imaging Science Interdisciplinary Research Theme in the Mechanical Engineering Department. His research focused on a biomaterial found in the lungs that could be used to form micro-meter diameter bubbles – about 1 percent of the diameter of a human hair - for ultrasound imaging and drug delivery by ultrasound. He successfully defended his thesis this August on the subject and is now continuing similar work at the Biomedical Ultrasonics, Biotherapy and Biopharmaceuticals Laboratory within the Institute of Biomedical Engineering (IBME) at Oxford.

Thomas said his work now was in using ultrasound to help with image-guided drug delivery using those microbubbles. His particular project addresses a procedure in which a blood clotting agent is injected in microbubbles to help stop internal bleeding. This technique could be incredibly useful for patients who have catheters put into arteries. For example, a cardiac surgeon placing a stent into the coronary artery of the heart, first inserts a catheter into the femoral artery and then guides it to the final location in the heart.

“Upon removal of the catheter from the artery, that vessel may not heal properly and bleeding occurs. When this happens, there are two ways to remedy the situation,” Thomas said. “One is surgery - very invasive and the vessel is sutured by the surgeon. The less invasive way is to inject a clotting solution that will seal the rupture without the need of opening up the patient.”

Since a blood clot can cause serious problems, it is critical that the clotting solution be injected directly to the affected area. To accomplish this, ultrasound imaging is used where both the rupture and needle location can be imaged. Thomas’ project looks to attach the clotting agent to microbubbles which will increase the image quality when using ultrasound allowing for more precision.

Thomas said the exciting part his project is that the bubbles will also have magnetic nanoparticles, further helping with placement.

“So the bubbles will accomplish two things: provide ultrasound contrast in the affected area and enable the ability to control the location of the bubbles within the body by using a magnetic force to manipulate them,” he said.

The work relates back to his time at CU when he studied a thin surfactant film found in human lungs that is similar to microbubbles when used as an ultrasound contrast agent. Thomas’ work showed that the biofilm was able to encapsulate both gas microbubbles and liquid nanometer-sized droplets.

“Chemists and engineers have tried to tune the composition of microbubble films since they provide such great vascular contrast during ultrasound imaging. However, what we discovered during my PhD work was that nature had already formulated the ideal film from millions of years of evolution in mammalian species,” he said.

Using microbubbles like these may allow for a variety of other treatments, including drug delivery directly across the blood-brain barrier which prevents foreign materials - including potentially beneficial drugs such a chemotherapy - from getting to the brain.

Thomas said the biomedical engineering program at Oxford stresses the importance of translating research like his into clinics and hospitals. Over the past decade, there have been over a dozen of successful start-up companies that have spun-off technology developed at the IBME and that was a big reason he was attracted to the position.

“The initial funding of IBME came with the mission to not only push science forward but produce new practical technologies that will transform healthcare. This idea still holds true today and I am fortunate to be a part of it,” he said.

Thomas moved to England with his wife, Kristen, who graduated from CU Boulder in 2013. He said his interest is still in the drug delivery field and that he is excited to work on something he is passionate about.

Thomas noted, “because of the experience, knowledge and relationships I gained there, CU Boulder will always have a special place in my heart.”