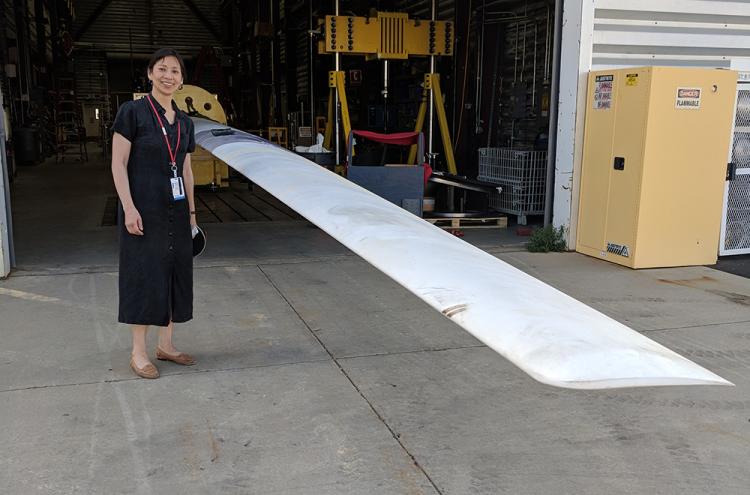 Photo of Pao with the blade after it was delivered to NREL.

New research and testing at the National Renewable Energy Lab outside of Boulder, with the help of CU Engineering, could transform the way wind turbines are created and used around the world - reducing costs along the way.

Starting next week, the lab will begin testing a small, scaled down version of a 13-megawatt turbine with two 105-meter blades, which will be positioned downwind rather than the traditional upwind configuration. The scaled blades should be visible from the highway, are 20-meters long and are being installed on the 2-bladed Controls Advanced Research Turbine (known as CART2) at NREL.

CU Professor Lucy Pao is leading the project here along with colleagues at other institutions as part of a project funded by the Advanced Research Projects Agency-Energy. It aims to solve several issues that have limited the potential of turbines to this point, including the need for ever larger stiff blades to increase power output.

“Conventional upwind turbines have been able to scale up to this point, but 13 megawatts seems to be the limit beyond which traditional upscaling will encounter a number of challenges for a variety of reasons,” Pao explained.

The largest three-bladed turbine commercially available today generates 9.5 megawatts with approximately 80-meter blades. The team’s two blades are designed to be “morphing,” meaning they are much lighter and more flexible than traditional versions. Inspired by nature, Pao said the idea is that the blades can bend like palm trees, making them ideal for offshore use, where turbines have to withstand hurricanes.

The downwind positioning of the rotor is also unique to the project. In a traditional upwind configuration, wind passes the blades and then the base. This can create problems when the blades are lengthened because they may be pushed into the tower in harsh conditions. Blades in the downwind alignment however will bend away from the base of the structure instead. Further, the two-blade design would lead to a reduction in the total material needed to operate.

The ultimate idea is for the blades to also be “segmented,” meaning they are created in parts, reducing the overall cost of manufacturing, transporting and installing them. That means if they were to go into commercial production, and Pao hopes they will eventually, larger wind turbines would not require larger foundries, cranes, or trucks for making and transporting the blades. The current experimental blades are not segmented, but the team has submitted a new proposal for future research funding under which they hope to more fully investigate and develop the segmentation aspects.

After the novel scaled blades are installed on the research turbine at NREL, the team will test basic control strategies and gather data through the high wind winter season in Boulder. There will also be some testing of advanced controls as the team searches for ways to improve the control of blade pitch angles and generator torque as conditions dictate.

The ability to adapt and function in harsh climates, lower overhead costs and the downwind configuration could all contribute to a more economical system that produces more power, said Pao.

“We have done a detailed analysis which shows that 25 percent levelized cost of energy reductions are possible relative to conventional upwind 3-bladed wind turbines,” she said. “If all goes well, this new concept could lower the cost of wind energy significantly.”

Pao is working on the project with her former PhD student Kathryn Johnson, now an associate professor at the Colorado School of Mines, and colleagues from the University of Virginia, University of Illinois, University of Texas at Dallas and NREL.