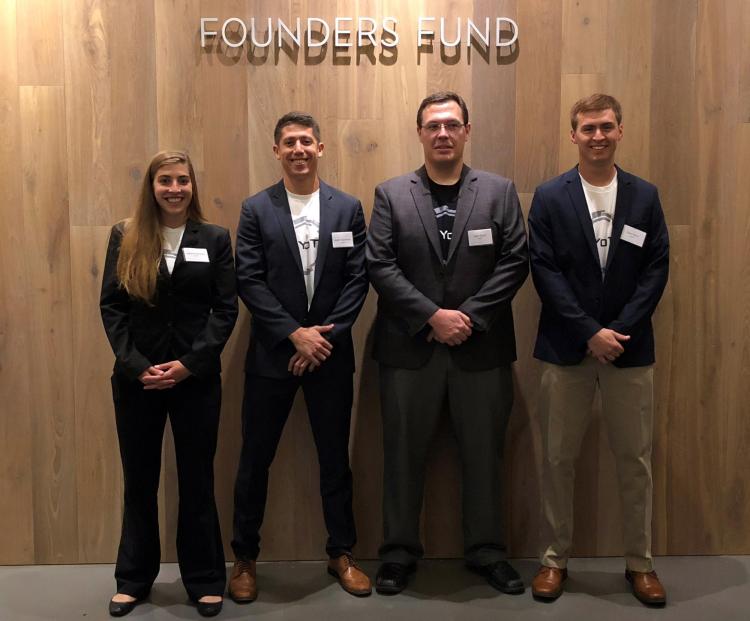 A group of engineering and business students from CU Boulder was one of only six teams selected from the nationwide Hacking for Defense (H4D) cohort to present to investors, entrepreneurs and government stakeholders at an event held at Founders Fund in San Francisco this summer.

MD5, the U.S. Department of Defense’s National Security Technology Accelerator, and Founders Fund hosted the event to showcase the potential of H4D teams to generate venture-worthy concepts over the course of their semester-long exploration of a real-world national security problem.

MD5 chose CU Boulder to present alongside teams from Stanford, Columbia, University of Southern California, Georgetown and Boise State. Their projects ranged from hydration for extreme survival to unmanned solar aircraft to handheld radars that allow users to see through walls.

Here, Katherine and Justin share their takeaways from the class and competition:

At the event, each team was given eight minutes to pitch their product to invited MD5 and Department of Defense representatives, venture capitalists and guests. The event continued with a lunch and keynote speech from Peter Thiel (founder of PayPal, Palantir) and ended with breakout workshops focused on team composition, funding your startup, working with government agencies, and next steps in company formation.

Many of the other teams pitching at the event had brought their own concept of design to the H4D program. For example, the teams from Stanford and Boise State had been working on their startups since 2016 and decided to have members join the H4D class to receive course credit for the work that they were already doing at the startup. As a result, some of the products were much more developed than others. The pYoT team from CU Boulder was very proud that we were able to compete with the teams that had been working on their ideas full-time for two to four times as long.

The H4D course provided students from science, engineering and business an opportunity to tackle real-world problems on multidisciplinary, collaborative teams. My team and I were presented with a 3-5 sentence statement from our DoD sponsors, which briefly explained the cybersecurity need for understanding what is on your network at a given time.

In engineering school, projects generally consist of students choosing a topic from an instructor-provided list or formulating an idea from course material. Students are then responsible for solving the technical problem and reporting on the method and results. The H4D course took a different approach. Instead of being given the project, we were responsible for conducting interviews with our DoD sponsor and people within the commercial space to determine the specific details of the problem were trying to solve.

Learning how to communicate within a diverse team was an unexpected challenge. It was enriching to see our team dynamic evolve. Explaining business concepts to engineering students and engineering concepts to business students highlighted the importance of communication and opened the door for new and differing opinions. While gaining an understanding of real-world technical team composition, we also learned the importance of debates, challenging each other’s and our own opinions, and communication.

The H4D team taught me the realistic skills necessary for joining the start-up world. Our team not only won $15,000 in initial investments, but we won the opportunity to travel to San Francisco to pitch our product.

The H4D platform gave John, Katherine, Kian and I an amazing opportunity to work on a real-world problem with very real-world implications that took us much further than we initially thought.

Our efforts during the semester (along with a stellar two-minute pitch from Katherine) won us a spot alongside teams from Stanford, Columbia, Georgetown, and other universities to present at Founders Fund - perhaps the largest and most prominent venture capital organization in the country.

Sponsored by the intelligence community, we pitched pYoT, our cyber security solution that classifies network traffic data into two main buckets (coming from IoT vs. non-IoT devices), which we developed over the course of the semester.

Understanding what’s on your network is the first step in any cybersecurity strategy because it allows you to identify potential gateways into your metal. However, it’s extremely difficult to identify IoT devices within your network, so we built a solution that quickly and efficiently points you in the direction, based on the mass amount of data collected.

The entire H4D/MD5 process gave me a new perspective on what it takes to start a personal venture and contribute to a highly technical project. Above all, I learned that I have the ability to work with and manage a team, randomly chosen, with varying talents and knowledge bases, and succeed at the highest level.

As an MBA, I didn’t always have the chance to get my hands dirty and apply the skills I was learning until I participated in H4D.

Hacking for Defense will be offered again at CU Boulder in the spring 2019 semester. The course has no prerequisites and is open to undergraduates and graduate students. The course is intended for students with diverse intellectual specialties and skills who do not have prior experience with national security issues.