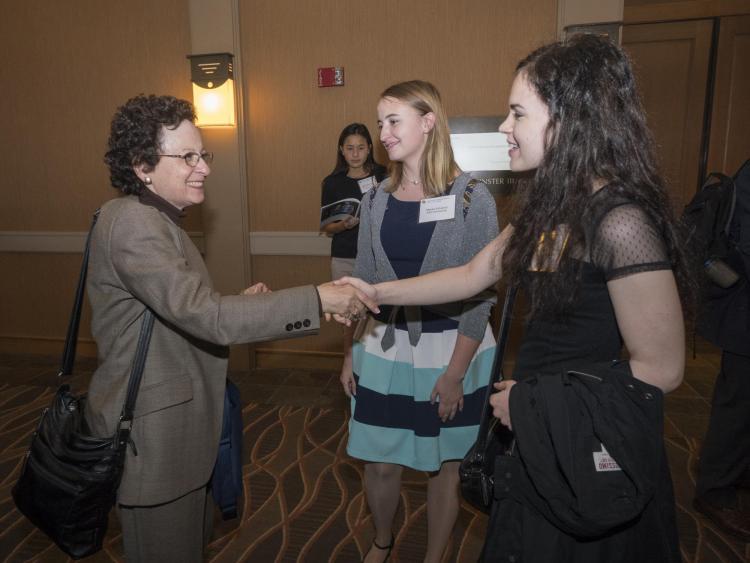 As I wrap up my interview with “adopted” CU Engineering alumna Jill Tietjen, we start swapping trivia about firsts for women. A CU alumna was the first female engineering faculty member at the University of Washington. The first movie directed by a black woman to be given theatrical release was in 1991. This year marks the first female cinematographer nominated for an Oscar.

Tietjen is always on the lookout for these tidbits, in the hopes that sometime soon we’ll have fewer firsts to report.

“I collect them everywhere. These moments are still happening!” she said. “Maybe if we bring it to the public attention, we can help fix it.”

Tietjen has spent years doing her part to advocate for and recognize women, both in engineering and in fields like filmmaking. That advocacy, combined with her own professional accomplishments, earned her induction into the Colorado Women’s Hall of Fame in 2010. This month, the Hall of Fame is collaborating with Rocky Mountain PBS for a video series highlighting several of their inductees, including Tietjen.

While Tietjen is an alumna of the University of Virginia – which had gone coed just three years before she enrolled – she considers CU Boulder her adopted university.

Her engagement with the College of Engineering and Applied Science includes the Jill S. Tietjen Endowed Scholarship in Engineering, which has supported 12 students since 2005, as well as service on several college advisory boards.

Tietjen was also director of the Women in Engineering Program – a predecessor of the BOLD Center – from 1997-2000. She said running that program was particularly impactful because she got to work closely with the very women she’d been working so hard to influence.

“From 1979 on, I’ve directed almost all of my activities outside of work to encouraging women to pursue engineering education,” she said. “So to be there and see the results of that work was exceedingly gratifying.”

While Tietjen is a professional engineer with more than 30 years’ experience in the electric utility industry as a consultant and expert witness, she fell in love with writing in high school. Her first book, Keys to Engineering Success, was published in 2001.

Soon after, a colleague approached her to co-author Her Story: A Timeline of the Women Who Changed America, published in 2003.

She’s currently finishing a follow-up that celebrates women in the film industry, and recently returned from a scouting trip to Tanzania for Her Story: A Timeline of the Women Who Changed Africa.

See What You Can Be

For Tietjen, being an advocate means making sure women are visible as role models. So she began nominating women for prestigious awards, serving on boards of directors and making speaking appearances.

One of her greatest successes was her nomination of Grace Murray Hopper for the National Medal of Technology in 1991. During that two-year nominating process – and not for the last time – she found herself wondering how this could be a first.

“How could (Hopper) be the first individual woman to win this award?” Tietjen exclaimed. “If you can’t be what you can’t see, and if everyone that you see getting awards is a man, you finally start to understand the problem.”