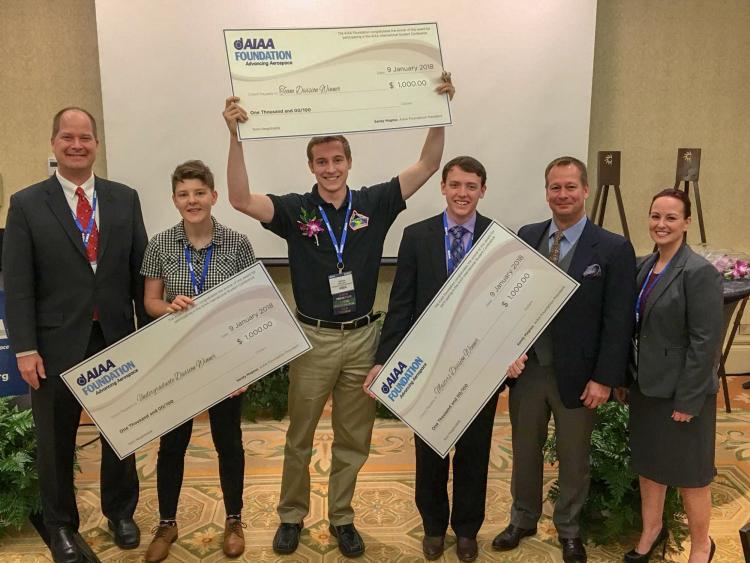 The recognition follows Team REPTAR's first place perfomance at the AIAA Region V Conference in 2017, giving us a shot at the international award.

Dustin Fishelman, Will Sear, and myself traveled to Orlando earlier this month to present our project at the SciTech Forum. The forum is held annually in the United States and it features hundreds of technical presentations, committee meetings to discuss the current aerospace and aeronautic landscape, and thousands of engineers from across the world.

We represented Team REPTAR and the University of Colorado Boulder in the Team category of the International Student Competition. We gave our full presentation about the vehicle we designed, built, and validated that could be used to assist in the recovery of CubeSat payloads from orbit. Our presentation and accompanying technical paper was judged by aerospace professionals, and we were compared against the other competing teams from across the country.

Ultimately, Team REPTAR was awarded first place in the team competition for our paper and presentation. This is the second year in a row that a CU Aerospace team has won this prestigious award (last year, Team ELSA won at the same conference).

It is my firm belief that, in addition to the tremendous work that the teams put in over the year, CU’s aerospace senior design class enables its teams to rise above the projects from teams across the country. At CU, the aerospace senior design teams are pushed to validate every aspect of their design. This is a challenging but extraordinarily important aspect of any aerospace project in the academic of professional world, and the emphasis that the CU faculty put on this aspect of the project made Team REPTAR stand out on the national stage where most schools do not take their projects from design to full validation.

Though the three members of our team travelled to the conference to present the winning presentation, we also participated in a slew of other components of the enormous AIAA SciTech Forum. 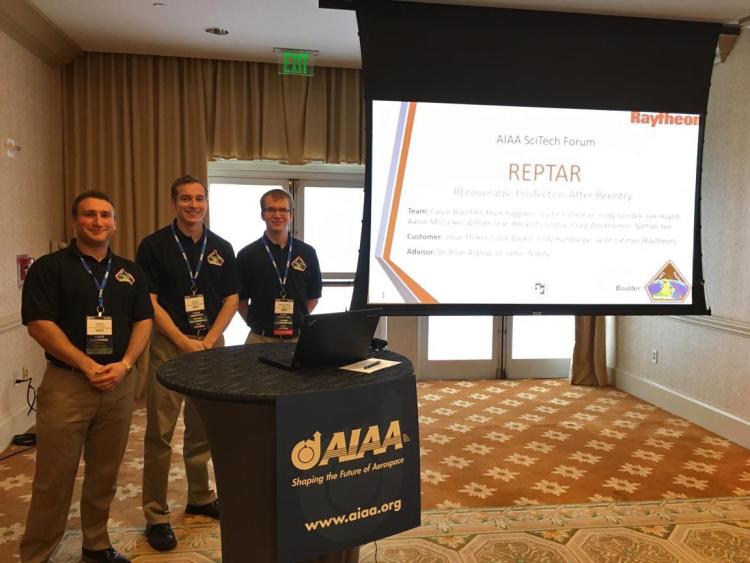 (l-r) Dustin Fishelman, Aaron McCusker, and Will Sear in Orlando at the SciTech Forum.

Additionally, Dustin, Will, and myself all attended four different mentoring and networking sessions in which we spoke with some of the highest ranking people in the field.

We spoke with vice presidents of the largest aerospace companies in the country, directors for some of the most cutting edge programs in the field, lobbyists shaping the field of aerospace law, the head of AIAA, and an astronaut. The experience that all of these mentors shared with us was invaluable in helping us shape our young careers.

To finish, I’d like to thank everyone who helped make Team REPTAR’s enormous accomplishment possible. Our sponsor, Raytheon Company, helped fund and guide us throughout the design class. CU’s aerospace faculty gave us valuable advice and held us to a very strict standard. AIAA and CU Boulder both assisted in the funding of the trip to the conference. And most importantly, the work accomplished by every member of Team REPTAR was exceptional. Calvin Buechler, Kevin Faggiano, Dustin Fishelman, Cody Gondek, Lee Huynh, Will Sear, Himanshi Singhal, Craig Wenkheimer, and Nathan Yeo all gave the project their all, and each member of the team should be tremendously proud of the honor that AIAA has given us.

Aaron McCusker graduated from CU Boulder in 2017 with a Bachelor of Science in Aerospace Engineering. He now works in Denver for Lockheed Martin Space Systems as a Systems Engineer. 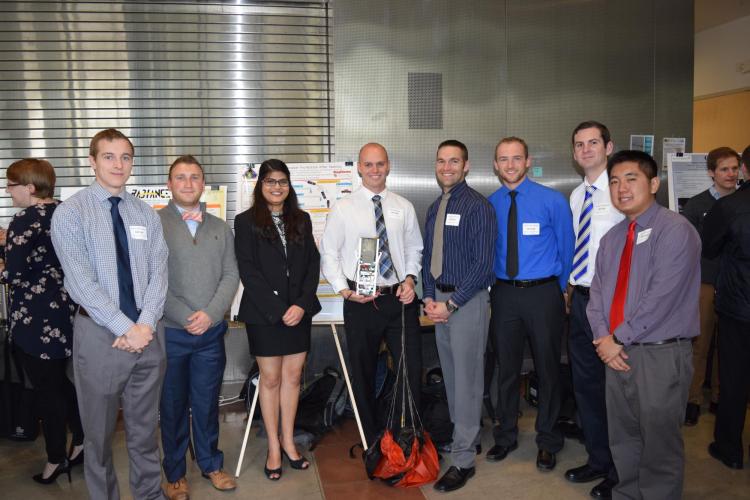