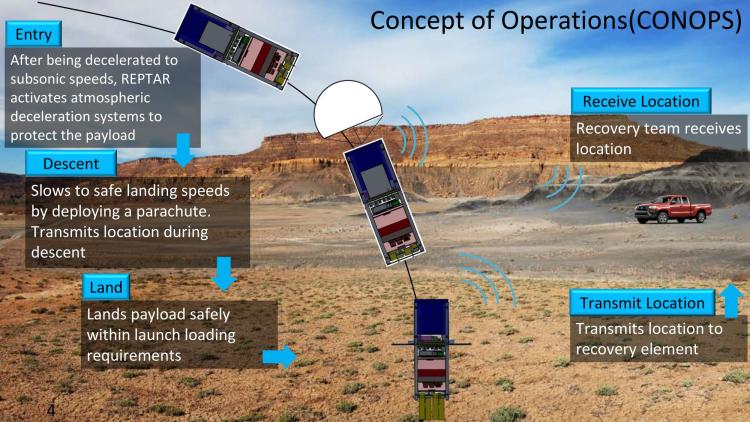 A concept drawing showing stages of the device's descent from subsonic speeds to touchdown and recovery.

The idea was that a system produced by a different team would protect our vehicle, and therefore the CubeSat payload, during the hypersonic and supersonic phases, and then we would take over once the vehicle began travelling at subsonic speeds.

We broke our mission into three main stages: Descent, Landing, and Transmission. During descent, the vehicle would deploy a parachute and slow to a safe landing speed. The Landing phase was the moment of impact where we’d need to cushion the landing to protect the CubeSat. The Transmission phase is when our vehicle would transmit its location to a search party so that the CubeSat payload could be recovered.

During the first semester, we completed the design and got a good idea of how we would manufacture and test our vehicle. We wrote and re-wrote our requirements and got a solid appreciation for how important it is to have clearly defined requirements before doing any designing (a lesson that we learned the hard way).

In the second semester, we manufactured our vehicle and performed thorough testing on all components and the vehicle as a whole. We quickly found that we could not trust commercial retailers to send us materials or electronics in a timely manner, and we also found that they frequently sent us items that did not meet the specifications that they had stated. Still, we constructed the full vehicle and were able to perform a full-system drop test to simulate phases of the mission. 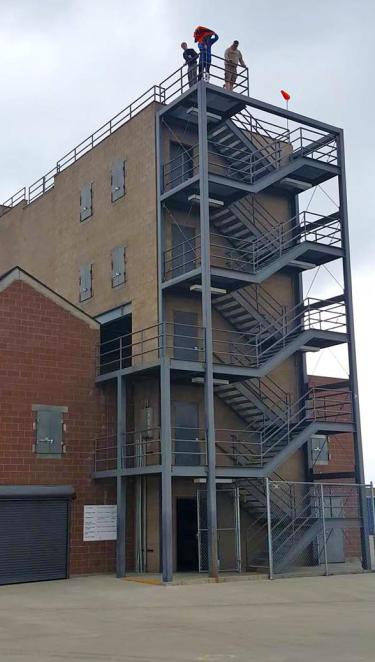 The team conducting a test drop from six stories up.

Near the end of the second semester, we submitted a report and a presentation to give at the AIAA Region V Student Conference held at Denver Metro. The report and presentation covered the entirety of the design and manufacturing processes and the majority of our testing. Overall, our submission was a broad overview of the work that we had been performing for the previous eight months.

All of the reports and presentations submitted to the AIAA Conference were evaluated based on a variety of criteria, and our report and presentation both received perfect scores from the judges. By achieving the highest score, we won First Place at the regional conference. As a team, we’re exceptionally proud to be honored with the award, especially because the 20(ish) other projects that we competed against were all excellently done.

Bound for the National Competition

By winning first place at the Region V Conference, we were given the opportunity to present at the International AIAA Student Conference January 8-12, 2018. We are happily taking that opportunity, and a portion of the team are flying out to Orlando to represent the University of Colorado Boulder and to give our presentation.

Our presentation and report will be scored against the winners of the other student conferences across the country and the globe, and we will be eligible to win the International AIAA Undergraduate Team Award.

Overall, our team learned a tremendous amount completing our project, and the majority of the lessons came during the second semester when we were moving the project from a collection of drawings and diagrams to a physical vehicle that would perform all of the tasks that we required.

Having spoken to aerospace seniors from across the country, I can safely say that CU is one of the only schools that actually builds and tests the projects that they design. Most other schools stop their projects when they complete the design process, but this simply deprives those students of the valuable lessons that come with bringing a design to life.

To finish, I feel like I owe it to my team to give them a huge thanks. They worked tirelessly through long nights, weekends, and breaks. They never hesitated to help each other when needed, they volunteered their time selflessly in support of the project, and they each brought unique expertise and personality to a project which could not have succeeded without their dedication.

Calvin Buechler, Kevin Faggiano, Dustin Fishelman, Cody Gondek, Lee Huynh, Will Sear, Himanshi Singhal, Craig Wenkheimer, and Nathan Yeo all gave the project their all, and they’re all very deserving of the praise and recognition that the AIAA has given to them.

Finally, I would like to thank Raytheon Company for sponsoring our project and for giving us guidance throughout the year. I’d also like to thank the CU Aerospace faculty for their assistance and contributions to our team and the project, and I’d like to thank the University of Colorado for helping fund the team’s trip to the conference in Orlando. The contributions of everyone surrounding the team ensured that the project would be as successful as it was, and that the project’s benefits to our academic and professional careers would far outlast the senior design class. 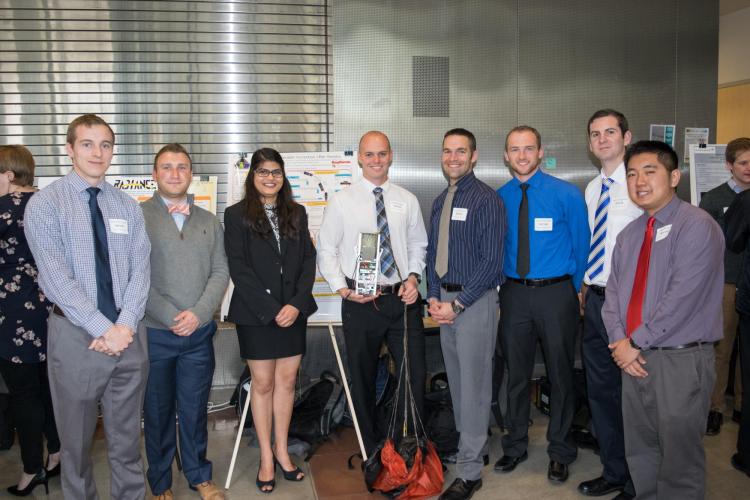 Aaron McCusker graduated from CU Boulder in 2017 with a Bachelor of Science in Aerospace Engineering. He now works in Denver for Lockheed Martin Space Systems as a Systems Engineer.