Current robotic materials and prosthetic limbs, while quickly gaining precision and application, are typically made of rigid materials and aren’t the most graceful machines – think C-3PO from "Star Wars." Researchers in the College of Engineering and Applied Science at CU Boulder are working to soften these limbs, and eventually full-body robots, to mimic natural human movement – perhaps like Data from "Star Trek."

Two papers out of CU Engineering, released today, open the doors to a new field of scientific inquiry. Both deal in the area of soft robotics. The first paper, published in the prestigious Science Magazine, introduces a new kind of actuator, or device that creates movement. The research described in this paper will help move humanity one step closer to life-like robots and prosthetics. The second, published in Science Robotics, a new flagship journal for interdisciplinary robotics research, broadens the materials and geometries used for these devices and explores the possibilities for their industrial application.

Both papers come out of the lab of Christoph Keplinger, an assistant professor of mechanical engineering and a fellow of the Materials Science and Engineering program. Keplinger describes the focus of his research group as “aiming to solve problems that impede human progress by synergizing concepts from soft matter physics and polymer chemistry with advanced engineering technologies.”

A pillar in CU Engineering’s just-released Multi-functional Materials interdisciplinary research theme, he is pioneering soft robotics for their application as high-performance, self-healing artificial muscles. In addition, he works on sustainable energy generation from untapped sources of renewable energy such as ocean waves. These two papers, however, deal solely with artificial muscles.

Bobby Braun, dean of the College of Engineering and Applied Science at CU Boulder, is certain of the impact these two papers will have in the robotics community.

“The research coming out of Dr. Keplinger’s lab is nothing short of astounding,” Braun said. “He and his team of students are helping create the future of flexible, more human-like robots that can be used to improve people’s lives and well-being. This line of research is a core, interdisciplinary strength of our college." 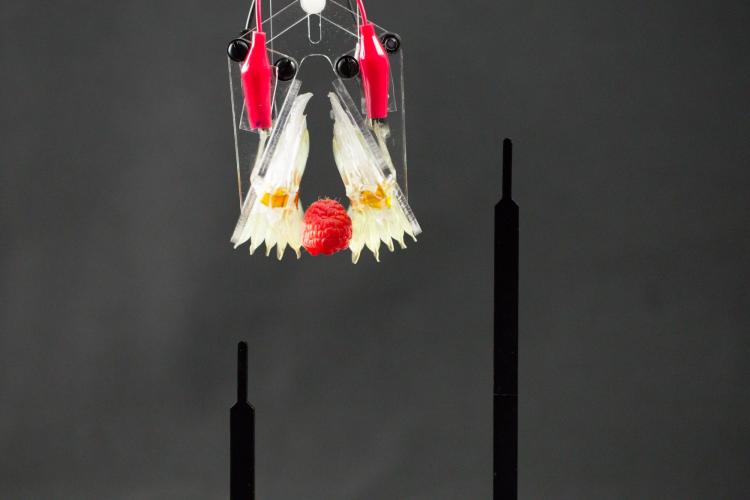 HASEL actuators can be designed as soft grippers to handle and manipulate delicate objects. Image courtesy of Keplinger Research Group and Science/AAAS.

Eric Acome, a PhD student in Keplinger’s group and the first author on the Science paper, agreed.

“It’s really exciting that our group is publishing in Science and Science Robotics at the same time,” said Acome. “This is a once-in-a-lifetime opportunity.”

The publication is the first time Acome’s been a first-author, and it’s also the first paper for many of the co-authors.

The Science paper introduces HASEL actuators, which stands for Hydraulically Amplified Self-healing Electrostatic actuators. Acome and his co-authors have introduced soft, active materials that perform like natural muscle. That in itself is noteworthy, but what sets their research apart is the self-healing aspect and the versatility of the materials.

Previous to HASEL actuators, soft robots relied primarily on soft pneumatic actuators. While soft pneumatic actuators are versatile, they need pumps, valves and long tubes to power the actuators, which limit the portability and speed. Electrically controlled dielectric elastomer actuators (DEAs), another type of soft actuator, can operate at high speeds and are directly powered by high-voltage electronics. However, DEAs fail prematurely from electrical damage, which prevents them from being scaled-up to deliver large forces. HASEL actuators combine the benefits of both soft pneumatic actuators and DEAs by using a combination of elastomer and liquid materials that deform from an applied voltage. The benefits of HASEL are twofold: the liquid and elastomer structure enables new types of motion, and the liquid enables actuators to heal from electrical damage. Remarkably, these benefits are realized without compromising performance of the muscle-like actuators.

Maddie King, an undergraduate author of the paper, compared DEA and HASEL actuators that had been designed with identical geometries.

“HASELs show superior performance compared to the DEAs,” she said, referring to the strains the actuators are able to achieve. “Also, they are able to self-heal, where the DEAs are not.”

This self-healing comes from a layer of fluid inserted between the two silicone layers. This fluid – at first, the team used canola oil from the local supermarket – creates a robust “muscle” less prone to electrical failure from dielectric breakdown. This breakdown has thus far inhibited widespread application of the electrically powered soft actuators. With the ability to heal from electrical failure, a more reliable system can be created and implemented into daily life.

Shane Mitchell is another PhD student integral to the research. He experimented with different shapes and materials for varying applications of the actuators and is co-author on both the Science and Science Robotics papers.

“HASEL solves the outstanding problem of the materials we use,” Mitchell said. “We can use thin film plastics or elastic silicone rubbers, etc. You can tailor the material and therefore the actuator can be tailored to a specific application. The beauty of this research is that it is opening a wide new field for scientific exploration.”

Their most impressive design consisted of an actuator that, when activated, looks similar to an inner tube that one might ride down a snowy slope. With the electrodes placed in the center on either side of a round actuator, voltage pulls the electrodes together and pushes the fluid contained within to the edges, increasing the actuator height. Think of a balloon: when you squeeze one end, the other gets bigger. This manipulation of the fluid within the actuators not only promotes self-healing but increases possibilities for shapes and sizes that can be created and changed.

Maddie Emmett, another undergraduate on the paper, helped Acome and Mitchell on the design aspect.

“We are trying to find which geometric shape yields the highest-performing actuators,” she said.

There have been previous designs that utilize the movement of a liquid or gas to change the shape of soft structures: soft hydraulic actuators and soft pneumatic actuators, respectively. The difference, however, is the source of pressurized liquid or gas. What sets the HASEL actuators apart is that they do not need a pump, water source or high-pressure air system. The only fluid needed is already contained within the actuator; the electrostatic forces are simply moving that fluid around.

The second paper, published in Science Robotics, builds upon this idea of fluid manipulation, though with the emphasis on new materials and geometries with industrial applications.

First-authored by PhD student Nick Kellaris, the paper is based on another manifestation of this new technology – Peano-HASEL actuators – that use bi-oriented polypropylene, or BOPP, as their shell. The same material utilized in potato chip bags, BOPP takes the price for each “muscle” developed down to about 10 cents.

“The biggest contribution is the introduction of a new material system,” Kellaris said. “This brings new performance to soft robotics at a fraction of the cost.” 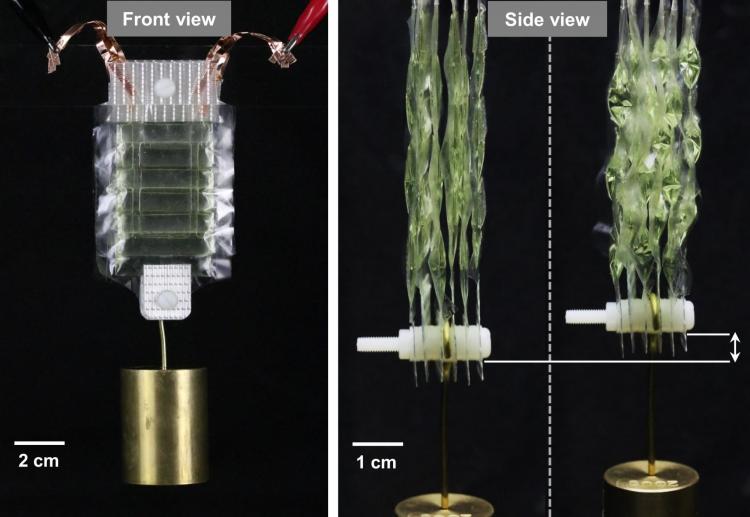 An array of Peano-HASEL actuators contracts like a muscle to easily lift more than 100 times its own weight. Image courtesy of Keplinger Research Group and Science Robotics/AAAS.

“Most electrically powered soft actuators such as DEAs expand upon activation,” he said. “Peano-HASELs contract effectively and rapidly.”

Keplinger, from whose lab these pivotal papers are emerging, is not only thrilled by the research findings but also by his excellent students.

“I’m excited that my group is so young and creative,” Keplinger said. “That we managed to create a breakthrough with a team of only undergraduate and graduate students is quite uncommon. It is extremely rewarding to lead a team of passionate, first-rate students and watch them become brilliant researchers.”

Keplinger also noted that the group is already working on the next-generation of HASEL actuators and have successfully designed prototypes that work at five times lower voltages.

The release of these papers brings new knowledge to the rest of the research community. What they will do with it is part of the buzz the authors are experiencing.

“Soft robotics is an emerging field,” Acome said. “We’re excited to see what the research community can do with HASEL actuators.”

For the group, this is not the end but rather a validation that has encouraged further exploration into the field.

“We now have the basic structure of a flexible or stretchable shell filled with insulating liquid,” Acome said. “We’ve shown three basic shapes. Now, the question is, where can our imagination take us?”

More on this research: