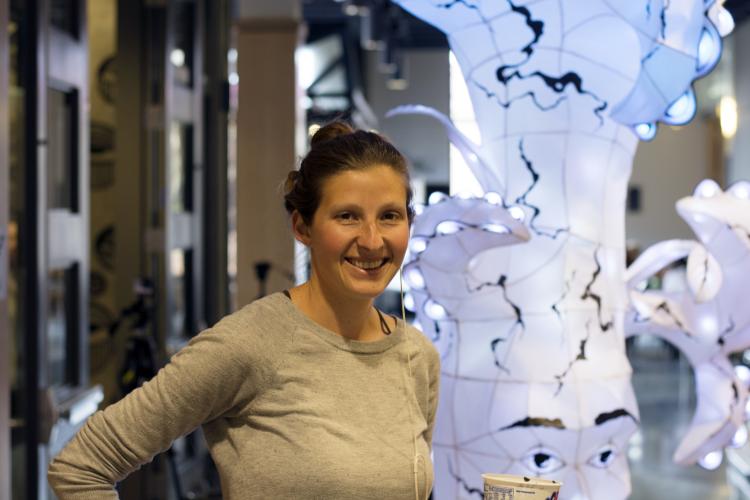 In the lobby of the Roser ATLAS Building, a nine-foot illuminated tree sculpture is lending artistic form to scientific function.

A project of PhD student Lila Finch and supported by Oracle Academy, the sculpture uses colored LEDs to visually demonstrate the health of a hydroponic garden growing one floor above.

Sensors measuring water levels, humidity, light and temperature are processed at the garden and transmitted wirelessly to microcontrollers in the sculpture. Those microcontrollers change the color and timing of 230 individually programmable LEDs, altering the tree's appearance in response to conditions in the garden.

In a glance, viewers can tell whether the plants are thriving or withering. A vivid blue base of the sculpture with blinking white and yellow lights on top indicates a well-nourished garden where photosynthesis and transpiration are actively occurring; red, steady lights indicate a depleted garden in need of rescue.

For Finch, a former high school chemistry and art teacher, the project connects often-segregated subjects, from art and biology to computer science and networking, in a project that’s as beautiful as it is functional.

“Coming here (to CU Boulder), I wanted to think about how you could value art and science equally in learning and kind of learn from one another,” Finch says. “The combination, I think, can be really useful for both fields.”

After months of conceptualizing, Finch planted the garden last fall and installed sensors connected to a BBC micro:bit controller and a Raspberry Pi. She began constructing the lantern sculpture in February, chronicling the process on the lab’s blog. Inspired by a Japanese lantern-making process called nebuta, Finch created an abstract tree from wire covered in paper and painted with wax and black dye, complete with a facial structure imagined from the forest spirits of her childhood tales. She used basic circuitry components – a Raspberry Pi and two Arduinos – to receive data and control the LEDs.

Finch said she had never attempted any physical computing, circuitry or soldering before this project.

“There was a lot of learning about communication between devices and the actual physical circuitry of these that I didn’t know before and now I know quite a bit about,” she says.

Now that the lantern is successfully operating, Finch plans to have middle and high school students construct their own expressive lanterns to teach the basics of programming and communications and more broadly, to encourage kids to consider how science and art can work in tandem to help understand and explain the world around us.

Assistant Professor Ben Shapiro, Finch’s advisor, said the project exemplifies the vision of the ATLAS Institute and the Laboratory for Playful Computation. Such projects can encourage the next generation of scientists and engineers by exposing them to the creative possibilities within those fields, he said.

“This sort of sculpture practice can be a way to conceptualize and tell stories about big data,” Shapiro said.

The project is supported by a generous gift from Oracle Academy, which in recent years has invested heavily in educational and mentoring initiatives that encourage young women to pursue careers in science, technology, engineering and math. As Oracle’s flagship philanthropic educational program, Oracle Academy advances computer science education and reaches more than 3.1 million students in 110 countries.

Shapiro said he’s grateful for the support from Oracle Academy and impressed by the way Finch has executed her vision.

“It’s really beautiful work,” Shapiro said. “It’s hard to imagine a student without Lila’s breadth of background being able to take it to such a cool place.”