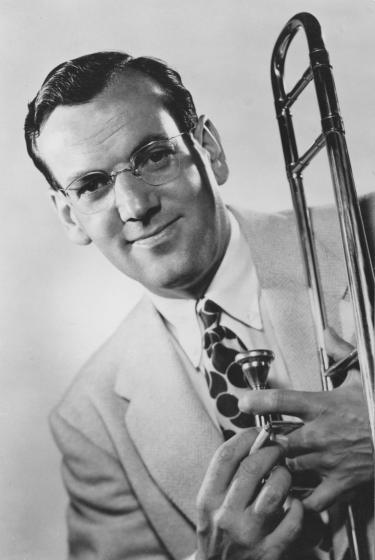 Alton Glenn Miller (1904-1944) is recognized as one of the most successful musicians of the 20th century. His name has become synonymous with the "big band era" of the 1930s and 1940s and his music has come to be identified by many as the soundtrack of the World War II era. Just what does it mean to honor Glenn Miller's achievements as a jazz and popular music icon in terms of quantifying his enduring popularity and success?

Glenn Miller and his Orchestra (1937-1942) performed at ballrooms and hotels across the United States. They played for dances and events that were known as "one night stands." During and between travels, the band appeared on many sustaining (non-commercial) broadcasts for the CBS, NBC-Red, NBC-Blue and Mutual radio networks. Working with the ad agency Newell-Emmett, Miller had a commercial prime-time CBS radio program for sponsor Liggett & Meyers Tobacco company and Chesterfield cigarettes that was known as the Chesterfield "Moonlight Serenade" (his theme song). The band made two feature motion pictures for 20th Century-Fox, "Sun Valley Serenade" (1941) and "Orchestra Wives" (1942). All of these activities could be quantified by attendance figures, earnings and radio audience ratings. By any measure, Glenn Miller was arguably America's most successful and popular bandleader.

Another key measure of Miller's impact were the phonograph records that he made for the RCA Victor and Bluebird labels. His record sales figures were unsurpassed. We are often asked, "how many top 10 records did Glenn Miller have?" This is an interesting question, because on one hand, he made records during his lifetime and before entering the armed forces in September 1942, but his records continued as best-sellers long after his tragic disappearance on December 15, 1944. Considering the "top 10" and "number one" hits that he had in his lifetime, Glenn Miller was arguably America's top entertainer in terms of "singles" sales of tunes. His success is all the more remarkable because it was accomplished during a brief span of time between 1939 and 1943. For the first time, the Glenn Miller Collections has quantified Glenn Miller's record hits, which can be found here: