Nearly one month after the Marshall Fire became the most destructive and one of the most unique wildfires in Colorado history, CU Boulder researchers from across campus—many of them personally affected by the fire—have pivoted and applied their expertise to the aftermath, hoping to learn from a tragedy in their own backyard and help prepare the country for the next “climate fire.”

“What makes this fire really unique is that it happened in a community that is full of researchers that study this exact topic,” said Natasha Stavros, director of the Earth Lab Analytics Hub at the Cooperative Institute for Research in Environmental Sciences (CIRES) at CU Boulder. “We are going to have measurements unlike anywhere else.”

What makes this fire really unique is that it happened in a community that is full of researchers that study this exact topic. We are going to have measurements unlike anywhere else.”
–Natasha Stavros

As a grass-fueled December wildfire in a crowded suburb, the fire was quite different than the state’s massive forest fires of 2020, resulting in many novel impacts on the environment and human health. More than a dozen research projects are already underway, investigating everything from its impact on air and water quality, to the fire speeds that drove it, and how changes in infrastructure and insurance could limit damage from future fires like it. Researchers hope the findings can help inform homeowners, local governments and communities today and shape policies for tomorrow.

“In between all of us, there is so much expertise to address the causes and the impacts of this fire,” said Joost de Gouw, CIRES fellow and professor of chemistry. “If we come together to produce and publish research, we can really change the future of how we think about wildfire.”

Recipe for a winter wildfire

Due to higher-than-normal snowpack levels in late winter of 2021, a wet spring and a rainier than normal July, grasses grew abundantly in the Front Range throughout the year. By the time December rolled around, fuel accumulation was up 60% to 70% compared with a normal year. These plentiful dry grasses, combined with a 3-foot snow deficit and fierce Chinook winds, set the perfect stage that day for a spark to spiral out of control. 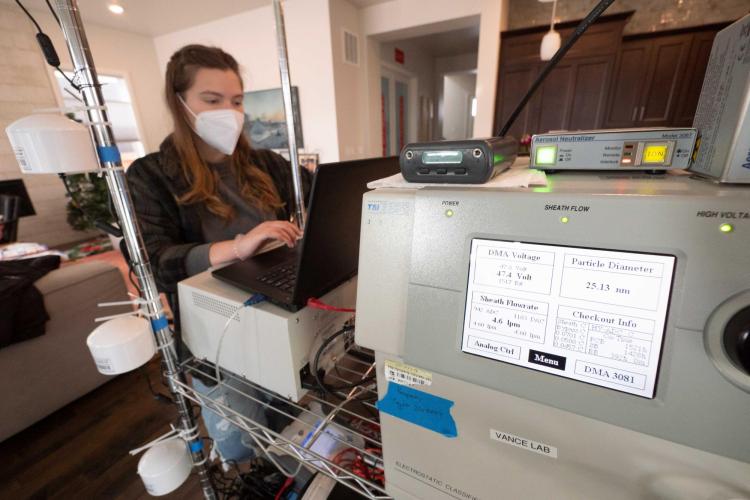 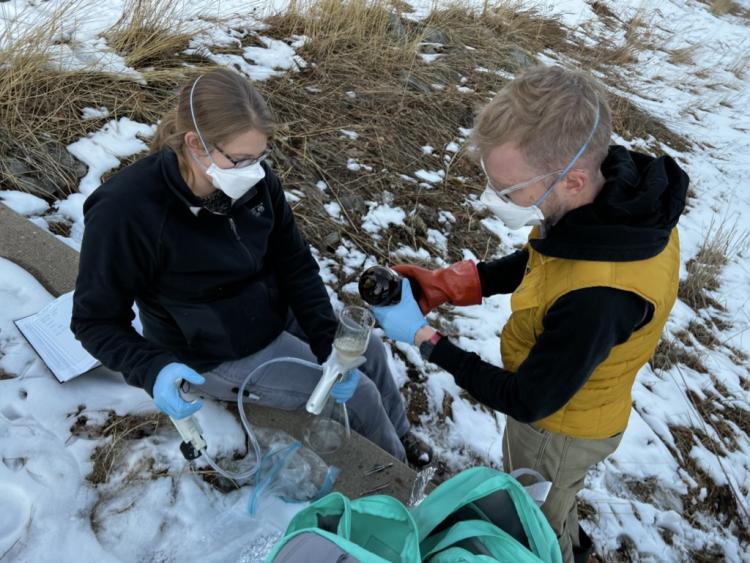 This abundant fuel would not have existed without increases in precipitation and snowmelt in the first half of 2021, followed by a drastic lack of moisture in the second half of the year—both of which point to climate as the driving cause.

“It’s the first time in my career I have felt comfortable saying this is a climate fire,” said Stavros.

Climate change will continue to have a hand in the future of wildfire, increasing the length and intensity of fire seasons as well as changing how, when and where water is distributed, said Stavros.

In addition to analyzing the impacts of fuel growth, researchers in the Earth Lab are also examining the role of another major factor in the Marshall Fiire: speed.

The Marshall Fire only burned 6,000 acres, less than half the size of Colorado’s second most destructive fire in state history, the Black Forest Fire. Yet it tore through twice as much infrastructure, accounting for 39% of all homes lost to wildfire disasters in the state since 1999, according to Maxwell Cook, doctoral student in the Department of Geography and the Earth Lab.

The fire also now ranks in the top 15 most destructive wildfire events in the western United States, only one of two grassland fires in that list.

Cook is currently working with Jennifer Balch, director of the Earth Lab, to conduct research on the factors which make a fire most likely to burn down homes.

So far, their data shows speed matters most. This may seem obvious, but Cook, Balch and their colleagues have developed new data that now allows them to track and quantify that impact.

“The speed of the fire is also really what makes it difficult for emergency management personnel to respond, to get evacuation orders out in time,” said Cook. “Management strategies that are aimed at reducing the speed of wildfires could be critically important for communities.”

This could include creating fire/fuel breaks around suburban neighborhoods and removing vegetation next to homes—strategies already broadly in use in foothills communities around Colorado. Early detection systems and quick emergency responses are also key, especially in densely populated neighborhoods.

The Earth Lab is also involved in helping develop better maps of where homes are at risk of wildfire across the West, which can help communities and insurances companies better plan for and mitigate that risk.

“We may need to think hard about what we define as the wildland urban interface (WUI). There's a lot of flammable landscape and development out there that's maybe not accounted for,” said Cook. “Building smarter, both in terms of where we build and how we build, that's going to be a big thing moving forward.”

Three weeks after the fire, homeowners and renters who did not lose their residences still face an important unknown: Is it safe to go home?

Buildings were inundated with smoke, full of unhealthy compounds created as the blaze burned paint, fried refrigerators and melted metals in nearby homes. These chemicals, absorbed by surviving structures like a sponge, now pose a previously unquantified problem.

Air quality scientists from CU Boulder, CIRES and NOAA quickly compiled an online resource about the impacts of post-fire smoke cleanup in homes. Led by de Gouw, they next installed instruments in several surviving homes to measure levels of harmful gases and understand the lingering effects of smoke on indoor air quality. Another team of scientists has also been driving through affected neighborhoods with a mobile laboratory to measure what the remains of buildings emit into the immediate atmosphere.

An interdisciplinary team including engineers, social scientists and chemists from across campus will continue to collect data indoors over the coming months to inform residents and local governments and learn more about lingering human health concerns that wildfires in urban areas can present.

Meanwhile, Fernando Rosario-Ortiz and his colleagues are studying water.

For years, the associate dean for faculty advancement at the College of Engineering and his colleagues in the Environmental Engineering Program have worked to understand the implications of wildfire on water. But they usually study forests.

It’s not just wood that’s burning in a suburban fire: It’s homes, vehicles and all the stuff in them: fabric, plastics, electronics, batteries, you name it. Those remains and the compounds created can find their way into local water systems. When a fire is quickly followed by rain or snow, as was the case with the Marshall Fire, concerns about contamination are even higher, he said.

Julie Korak and Cresten Mansfeldt, assistant professors of environmental engineering, have partnered with colleagues across campus, local community organizations and municipalities, to collect surface water samples in the area, test for concerning chemicals and address questions of watershed safety posed by residents. In the next month or so, the team will have initial results to share with stakeholders.

“Everyone here takes their water very seriously,” said Mansfeldt. “This work provides a first fingerprint of how a fire like this impacts a community, and how we can assist recovery.”

Now that we know a fire like this is possible, the big question the Front Range faces is: How do we keep this from happening again?

A first step in answering: To get a comprehensive, birds-eye view of the damage.

To that end, Brad Wham, assistant research professor in the Center for Infrastructure, Energy and Space Testing, will join a national team of colleagues this week to fly drones over the burn sites before cleanup begins, gathering valuable clues about what happened that day. The work is part of a larger collaborative research effort, supported by the Resilient Infrastructure with Sustainability and Equity IRT (RISE) within the College of Engineering and Applied Science, formed in the wake of the fire to connect environmental engineers, social scientists, first responders, and policy experts conducting work on natural disasters.

And once rebuilding begins?

“It is entirely practical to build back better,” said Keith Porter, adjoint professor of civil, architecture and environmental engineering.

Porter explains that using fire resistant materials to build a home doesn’t only make it less likely to burn, but they’re a relatively cheap upgrade (less than $10,000 compared to replacing a home worth $600,000) and due to their longevity, can lead to immense savings over the life of the home.

The International Wildland Urban Interface Code, for example—adopted in parts of Boulder County—requires that fire resistant materials be used in new construction. Porter points out, however, that unless cities and counties mandate this kind of fire code, homebuilders aren’t required to swap wood shingles for a non-combustible roof or to replace vinyl siding with stucco in new developments. When rebuilding, insurance companies may mandate that a house be replaced “like for like,” potentially inhibiting homeowners from replacing flammable building materials with fire resistant ones—even if it could save insurance companies money to let people do so, according to Porter.

As affected residents navigate their insurance policies, find temporary housing in a tight market and try to stay healthy during the omicron surge, fighting for fire resistant materials may not be able to be a top priority. This is why, Porter points out, the real power to protect public safety is not on the individual, but in the hands of local officials.

“Everybody else is affected by somebody else's house burning,” said Porter. “Both in an economic sense and in a moral sense, we really are all in this together.”

Birds that can live at 14,000 feet and also breed at sea level might have evolved more quickly than previously thought. END_OF_DOCUMENT_TOKEN_TO_BE_REPLACED

Despite the Inflation Reduction Act, U.S. progress on climate change remains stuck in a climate conundrum, CU Boulder experts say, hampered by politics, complexity and the scope of the problem. END_OF_DOCUMENT_TOKEN_TO_BE_REPLACED

A CU Boulder-led study shows that between 1985 and 2019 in Brazil’s Atlantic Forest, deforestation decreased and reforestation increased on lands where Indigenous communities had been able to complete a legal process to receive formal recognition of their ancestral lands. END_OF_DOCUMENT_TOKEN_TO_BE_REPLACED
Return to the top of the page