The drone whirs to life on a driveway in the Spanish Hills neighborhood of Boulder County. Its four spinning motors lift it to nearly 200 feet above the ground. Below, the cul-de-sac comes into view, revealing the stone chimneys and blackened foundations that dot the hillside—what remains of many of the houses in this neighborhood after flames swept through on Dec. 30 and into the morning of Dec. 31 during what would become known as the Marshall Fire.

Brad Wham trudges through the snow to join about a dozen other researchers who have gathered to watch the flight this morning. They’re wearing hard hats and neon safety vests. As an engineer at CU Boulder, Wham studies how water pipelines and other “lifelines” can maintain their functionality during natural hazards, such as earthquakes and wildfires. He also lives in Louisville, Colorado, and had to evacuate his own home on that same day.

“I’ve deployed to Japan and New Zealand to study disasters very shortly after they occurred,” said Wham, an assistant research professor in the Department of Civil, Environmental and Architectural Engineering (CEAE). “It has been a different experience to have them happen in my hometown.”

The Marshall Fire, which spread throughout much of Boulder County including the towns of Superior and Louisville, became the most destructive fire in Colorado’s history. More than 1,000 homes were lost, and approximately 6,000 acres burned. One person remains missing, while another was confirmed dead.

In coordination with local officials, Wham and his colleagues from Oregon State and Purdue universities have been surveying the damage since first-responders extinguished the flames. The effort is part of an initiative funded by the National Science Foundation (NSF) called Geotechnical Extreme Events Reconnaissance (GEER), which deploys researchers to disaster sites around the world. The team hopes to better understand the disaster from a uniquely engineering perspective: Why did some houses burn, for example, while neighboring homes survived? How did critical services like water, gas and electricity hold up during one of the worst disasters in Boulder County’s history?

Time is of the essence. Soon, bulldozers and excavators will crawl through the impacted areas to begin the slow process of rebuilding—and much of that information will be gone forever.

“I think what we’re doing here is going to be beneficial in the future, especially with other communities that are going to have fires,” said Jessica Ramos, a senior at CU Boulder who’s working on Wham’s research team.

The Marshall Fire swept through this cul-de-sac in the Spanish Hills neighborhood. (Credit: Casey Cass/CU Boulder)

CONVERGE is hosting a series of virtual forums to discuss research on the Marshall Fire. Tune in for the next forum on Thursday, Feb. 17, from 2 to 3 p.m. mountain time.

Erica Fischer, a structural engineering professor at Oregon State University who leads the GEER team along with Wham, joined the researchers in Spanish Hills on this windy morning in January.

In many ways, the neighborhood shows why people have flocked to Boulder County in recent decades. Its rolling hills offer a startling view of the CU Boulder campus and the Flatirons beyond. But, Fischer notes, wildfires have been an inescapable part of these kinds of beautiful landscapes since long before humans settled here—and, as the climate warms in Colorado, they’re likely to grow worse.

“I would love to have this view,” she says, standing on a snowy hillside. “This is incredible, but beautiful scenery is created out of disaster. That’s how mountains are formed. That’s how lush forests are created. Understanding that is important.”

She and her colleagues are hoping to help people to live more safely within this dynamic environment.

They’re taking a multi-pronged approach to the research. They’ve utilized laser sensors to create 3D models of homes and retaining structures burned in the fire. They’ve also deployed flying vehicles like the quadcopter drones—on loan from the NSF-funded RAPID facility at the University of Washington.

This kind of interdisciplinary reconnaissance related to a wildfire has never been done before by GEER,” said Shideh Dashti, an associate professor in CEAE who leads an interdisciplinary research effort at CU Boulder called Resilient Infrastructure with Sustainability and Equity. “The solutions we come up with need to be holistic.”

As one part of that fast-moving effort, the group is working to recreate a heat map of the path the fire took through towns such as Superior and Louisville.

Fischer explained, as concrete heats up, it changes color, turning pinker the warmer it becomes. Students from Oregon and CU Boulder are inspecting the foundations of homes in the region, using custom-made color swatches to try to estimate how hot the flames got—giving them a better sense of what happened inside those homes as they burned. 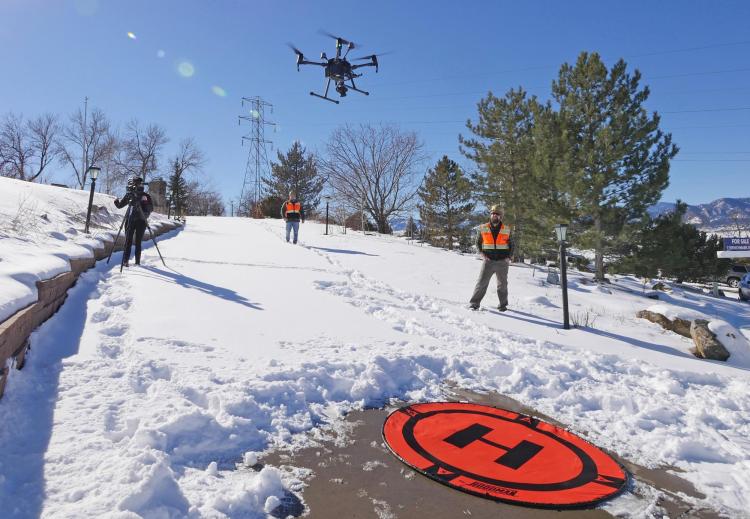 Members of the GEER team watch a drone take off from the Spanish Hills neighborhood. (Credit: Casey Cass/CU Boulder) 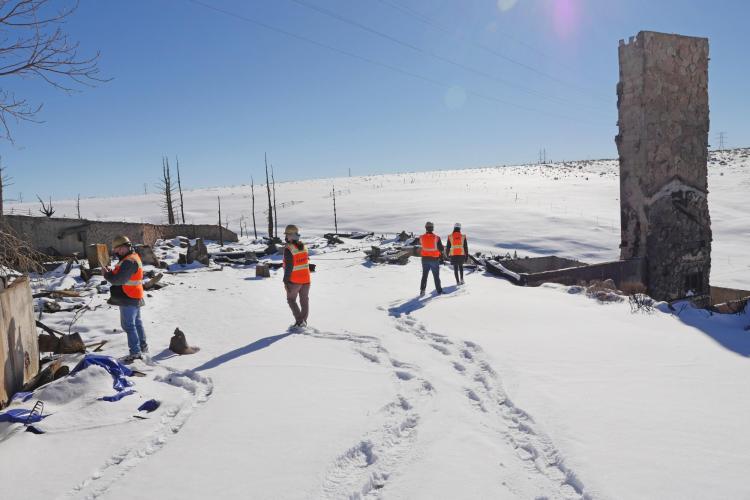 The team plans to publish its initial findings through a publicly-available report in March.

Ultimately, the researchers hope to bring together lessons learned from the Marshall Fire for other communities across the West. Fischer noted that recommendations like the International Wildland-Urban Interface Code and the National Fire Protection Agency's FireWise Program have long laid out how homeowners can safeguard homes from wildfires. Building a gravel skirt around your house, for example, can help to buffer it from flames. But many of those recommendations are expensive to put into place, she said, and no one knows which ones give you the biggest bang for your buck.

Wham understands the urgency of the effort. At 2 p.m. on Dec. 30, he packed a bag and left his house in Louisville as flames licked the ground just a couple hundred yards away. His house made it through the night, but many others nearby didn’t.

“The fire destroyed structures all around us, to the north, the west, the south,” he said from Spanish Hills, a mile and a half from his home. “But the response is the same as if it were in another community. We want to help in any way we can. We want to support the local institutions that are making decisions to get people back to their homes and recover from this as safely and as efficiently as possible.”

As part of that, Wham and his colleagues are also striving to understand how humans responded to this unprecedented disaster. The team has interviewed emergency management personnel and other local leaders to learn more about the decisions they made during and after the fire—how did residents evacuate neighborhoods, and how did cities and the county prioritize restoring vital services? In Louisville, for example, the local water treatment plant lost power, natural gas and communication services during the fire, severely limiting its capacity to get water to firefighters. Local officials trucked in natural gas from the surrounding area to restore the facility’s critical water pressure demands.

Lori Peek is a sociologist who directs the Natural Hazards Center at CU Boulder and an associated NSF-funded effort called CONVERGE, which coordinates research on natural disasters. She has a lot of experience collecting perishable data in the immediate aftermath of events from 9/11 to Hurricane Katrina and the 2010 BP oil spill.

“One of the keys to doing ethical disaster research is making sure that work is grounded in the local cultural context,” Peek said. “This multi-disciplinary team of engineers had those deep ties and has the opportunity to do grounded research that makes a scientific contribution but is also immediately useful to local leaders.”

Wham, for his part, has already taken one big lesson away from the Marshall Fire.

“People from all over the state and even from outside the state came in to fight the fires and help restore water service and power systems,” he said. “Those are really important relationships and connections that support the recovery process.”

He hopes that same wider community will help residents of the impacted neighborhoods as they begin the slow process of rebuilding their homes and their lives.

Other participants in the GEER study include CU Boulder professors Abbie Liel and Amy Javernick-Will of CEAE and Andrew Whelton of Purdue. Students Nicolas Berty, Jacob Klingaman and Hailey-Rae Rose of CU Boulder and Amy Metz and Dae Kun Kang of Oregon State are also aiding the effort.

Among many interdisciplinary efforts, scientists are using the power and promise of remote sensing to help solve food supply, pollution and water scarcity problems around the globe. END_OF_DOCUMENT_TOKEN_TO_BE_REPLACED

A new tool developed by CU Boulder researchers could lead to more efficient and cheaper technologies for capturing heat-trapping gases from the atmosphere and converting them into beneficial substances, like fuel or building materials. END_OF_DOCUMENT_TOKEN_TO_BE_REPLACED

The new species, mouse- to cat-sized ancestors of today's hoofed animals like cattle and deer, offer scientists a new window into what the American West looked like just after the extinction of the dinosaurs. END_OF_DOCUMENT_TOKEN_TO_BE_REPLACED
Return to the top of the page