In an otherwise empty lab on the CU Boulder campus, a musician and a scientist stand 12 feet apart in separate rooms, an open door between them. The musician crouches next to a small, round mirror, the side of his unmasked mouth appearing in the reflection.

“Now say the alphabet,” says Abhishek Kumar, a graduate student in mechanical engineering, as he adjusts the focus on a digital video camera, points it at the mirror and hits record.

Kumar then asks the musician to stand on a step stool, positioned with the bell of his clarinet—the flared part at the end where the sound comes out—in front of the mirror.

“Now we’ll do the chromatic scale,” Kumar instructs. The musician plays each note slowly and purposefully, pausing between notes.

Next, they wrap a thin layer of nylon, similar to pantyhose, around the bell and repeat the scale in front of the mirror.

While these methods might seem unusual, these two CU Boulder students are part of a group conducting ground-breaking scientific research.

The questions they’re trying to answer: Do wind instruments create aerosols—the tiny droplets of liquid that can carry the novel coronavirus? Where do the aerosols come out of a given instrument? And what can be done to make practice and performance spaces safer, particularly amid a pandemic?

The research team, led by mechanical engineering professor Shelly Miller, seeks to find out how musical ensembles around the world can continue to safely perform music together during the pandemic.

After a report from the Centers for Disease Control and Prevention linked an outbreak of COVID-19 in Washington state to a choir rehearsal, Miller’s research confirmed that singing could spread the virus that causes it, through aerosols. Although there is no record of a COVID-19 outbreak being linked to an instrumental ensemble, scientists like Miller suspected such gatherings could also potentially spread the virus.

However, no one had studied whether playing a wind instrument generates aerosols, how many or how they move through an indoor space.

So a group of over 120 performing arts groups commissioned Miller and her team to find out.

“They wanted to know whether wind instruments are as dangerous as singing and what we could do to make them safer,” Miller said. “They are literally trying to save music.”

Tehya Stockman, a graduate student in mechanical engineering, has been involved with Miller since the start of this research, running tests and providing a musician’s perspective, as she herself plays the clarinet.

“The hope is that students, teachers, school systems and parents can use this information to calculate their own risk,” Stockman said. 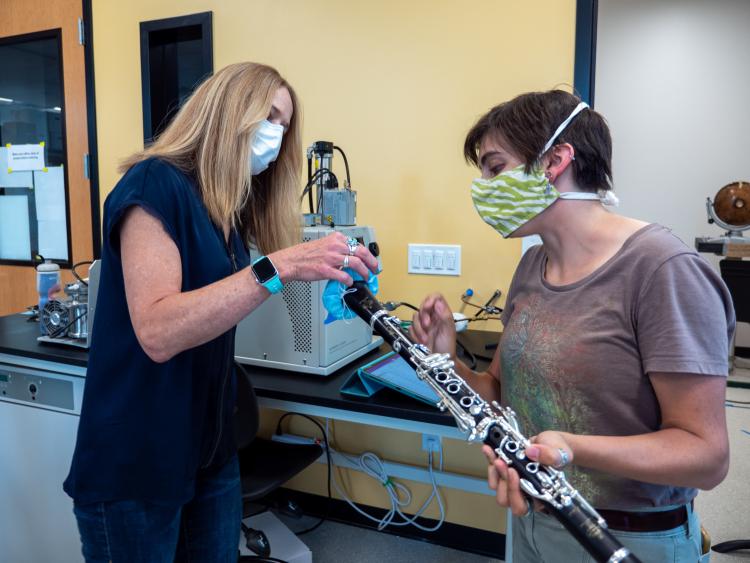 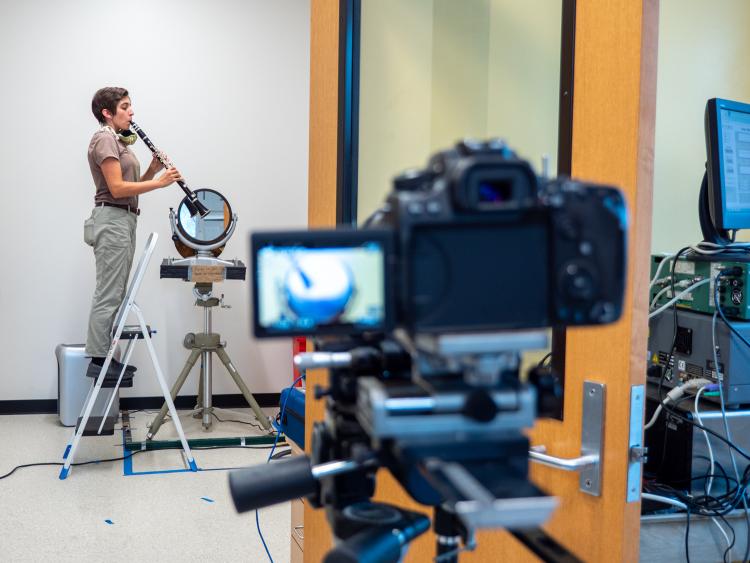 The work began in earnest in June and will run through December.

But the first phase of the study is complete. It found that wind instruments, as well as singing and theater performances, do indeed generate aerosols.

To be generated, the researchers say, aerosols need a “wet, vibrating surface” like your throat or tongue. When someone plays an instrument, vibrating reeds and buzzing lips are the culprits.

The amount of aerosol produced seems to depend on the type of instrument a person plays.

Instrument shape also influences aerosol production, so the team is testing not only oboe, clarinet and flute, but trumpet, tuba, baritone horn and trombone. They are also inviting singers and theater performers to be part of the study.

The researchers quickly focused on trying to find out how to reduce aerosol emissions from these activities. This was so that marching bands could start practicing and school music programs could open, implementing strategies to reduce risk of possible infection because of aerosols.

“There are all kinds of studies on the acoustic sound that comes out of instruments, but not very much on the aerodynamics,” said Jean Hertzberg, associate professor of mechanical engineering. “We're finding that masking an instrument could be just as important as masking a human.”

While these results are preliminary, Miller recommends musicians wear a mask even while playing, using one with a small slit for one’s mouth and the instrument’s mouthpiece, while their nose remains covered. She also recommended using a well-fitted bell cover with multiple layers of tightly woven material, social distancing while playing, playing in a well-ventilated place and limiting the amount of time spent together indoors.

“It's not going to be just one thing to make you safe. It's going to be a layered approach," said Miller. 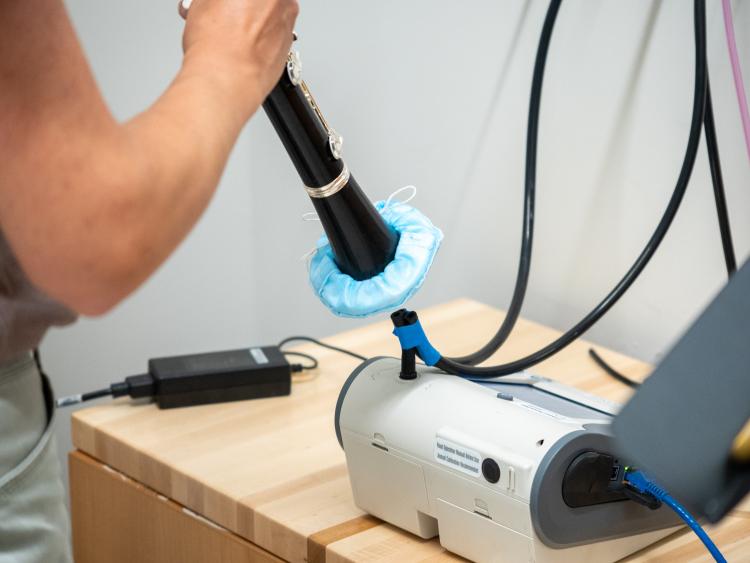 Teyha Stockman demonstrates how she plays her clarinet to test for aerosol particulate expulsion from the bell of the instrument. Stockman has fitted a homemade bell cover made from medical mask material to test for the effectiveness of lowering aerosol. (Credit: Glenn Asakawa/University of Colorado)

The science behind measuring music

On that September day in the CU lab, Kumar and the clarinetist used a method called the Schlieren technique to visualize how and where air moves as it leaves an instrument. The mirror and camera lens capture temperature and density changes in the air, revealing through a video recording what the eye cannot see.

“It shows a ghost of what’s coming out of a mouth, or out of the instrument. It shows us where the fluid is and where it isn’t. And it shows us if the fluid is flowing smoothly or it's all mixed up,” Hertzberg said.

They are also using what’s known as a laser sheet technique, conducted in a dark room with stage fog and lasers. In these experiments, the musicians breathe the fog in and out, and because the fog evaporates inside the musician, it comes out of the instrument darker than the air around it. The scientists then use the lasers to visualize the edge of the fog—where the fog stops and clean air begins.

Once they know where and how the aerosol comes out of an instrument, Stockman works to measure the quantity of these aerosols with mentoring from Miller; Marina Vance, assistant professor in the Department of Mechanical Engineering and the Environmental Engineering Program; and Darin Toohey, professor in atmospheric and oceanic sciences.

“Doing research on a pandemic during a pandemic is very, very hard,” Vance said, noting that the researchers have taken care to limit their time indoors and with each other.

The show goes on at CU Boulder 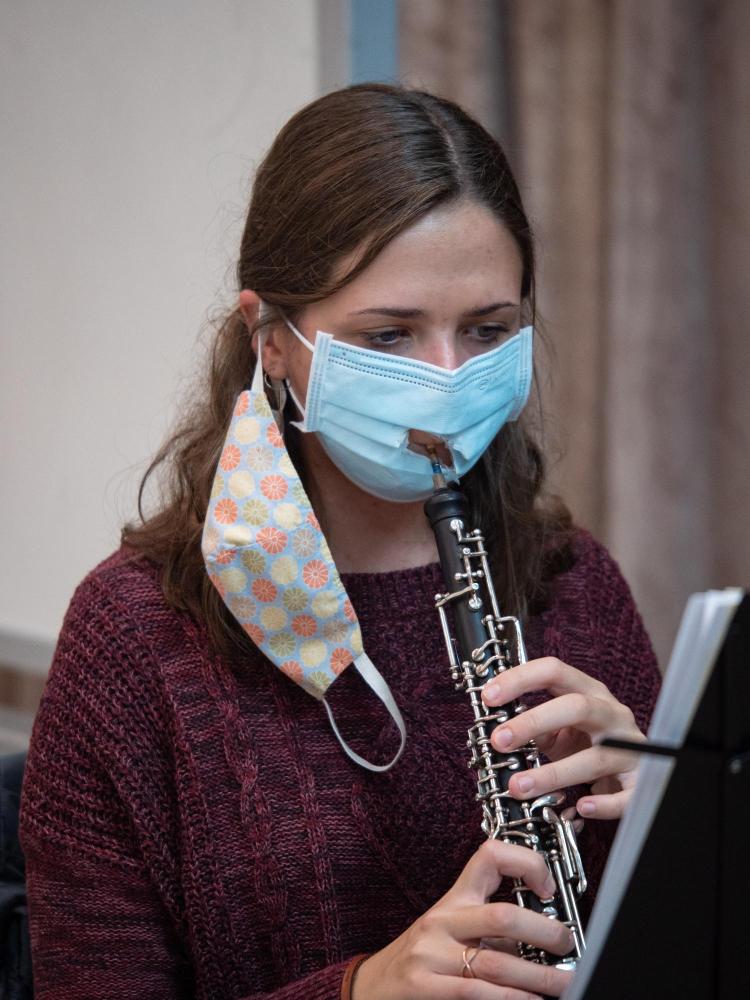 A music student practices COVID-safe protocols in Don McKinnney’s wind symphony class by wearing a mask with a slit cut through for the mouth at the CU Boulder College of Music. A second mask is ready to be worn when the student is not playing her instrument. (Credit: Glenn Asakawa/University of Colorado)

Already this fall, band students have begun taking these recommendations to heart as part of the third and final part of the study: applying these practices and measurements to real performance spaces, right here at CU Boulder.

Don McKinney, director of bands, was on board right away.

"One of the most exciting parts about the research is that it's providing a doorway, an opportunity for us to return and continue our work. Once we get past COVID, we can hit the ground running," McKinney said. “A lot of our students, not surprisingly, really want to get back to music-making. They want to be back in the rehearsal room. That's part of their being. That's part of their identity."

As temporary remote course instruction lifts and students return to rehearsal this week, things in the Imig Music Building look a little different, as McKinney has taken into account Miller’s precautionary recommendations. Musicians will all be spaced 12 feet apart, no more than 18 people will be in a room at a time, masks with mouth slits are required, and 30-minute rehearsals will be followed by 15-minute breaks.

The first few weeks of the semester were spent adjusting to this new normal. But students are on board with these restrictions around playing because they don’t want to lose momentum and their sense of community, he said.

“I told them to keep an open mind and be really flexible about trying this out. We'll adapt as we go through the semester,” McKinney said.

Additional collaborators on this study include Samir Patel, graduate student in mechanical engineering. A companion study is being conducted at the University of Maryland.

A collaborative study, including CU Boulder associate professor Andrew McAdam, investigates how the risks and rewards of red squirrel reproduction are a microcosm of evolutionary patterns. END_OF_DOCUMENT_TOKEN_TO_BE_REPLACED

What happens when an expert on natural language processing asks a chatbot to write a children's book in the style of Dr. Seuss? Professor Kai Larsen put the question to the test. END_OF_DOCUMENT_TOKEN_TO_BE_REPLACED

A model of your very own kidney made entirely from soft and pliable polymers? Researchers at two CU campuses are on the cusp of 3D printing realistic replicas of human anatomy. END_OF_DOCUMENT_TOKEN_TO_BE_REPLACED
Return to the top of the page