As coronavirus cases mount in Colorado, several dozen 3D printers have roared back to life on the CU Boulder campus. They’re making personal protective equipment (PPE) for health care workers on the front lines of the crisis.

A small team of volunteer engineers and students have taken on the project. They’re making the plastic bands that hold together face shields, a plastic barrier that covers the eyes, nose and mouth, and can help keep nurses and doctors from picking up infections.

“The supply chain for a lot of this equipment has broken down. We’re trying to help fill that gap,” said Mark Borden, a professor in the Paul M. Rady Department of Mechanical Engineering.

The burst of activity is part of a statewide campaign called make4covid. The initiative seeks to give guidance to makers across Colorado on how to create safe and effective PPE using high-tech tools like 3D printers and laser cutters. Make4covid was kicked off independently by Karsten Bartels, MD, Phd, who is also an anesthesiologist at the University of Colorado Anschutz Medical Campus, and includes participants from CU Denver and a host of local companies.

It’s another way that CU Boulder’s engineers are getting creative in a time of crisis, said Keith Molenaar, interim dean of the College of Engineering and Applied Science.

“Although this pandemic is deeply unsettling, I’m amazed with the resourcefulness and care that our faculty, staff and students have shown in responding to the situation,” Molenaar said.

Earlier this month, Rachel and Lauren Sharpe, twin sisters and seniors at CU Boulder, decided to clear their heads and go outside after several days of staying at home.

“We were both on a walk, and we were trying to brainstorm ways we could help,” said Rachel Sharpe, who studies mechanical engineering.

A day later, they got their chance: A colleague called them to see if they’d be interested in taking part in make4covid. Under guidance from Borden and other researchers, the twins set about getting the 16 3D printers in the Integrated Teaching and Learning Lab (ITLL) up and running. 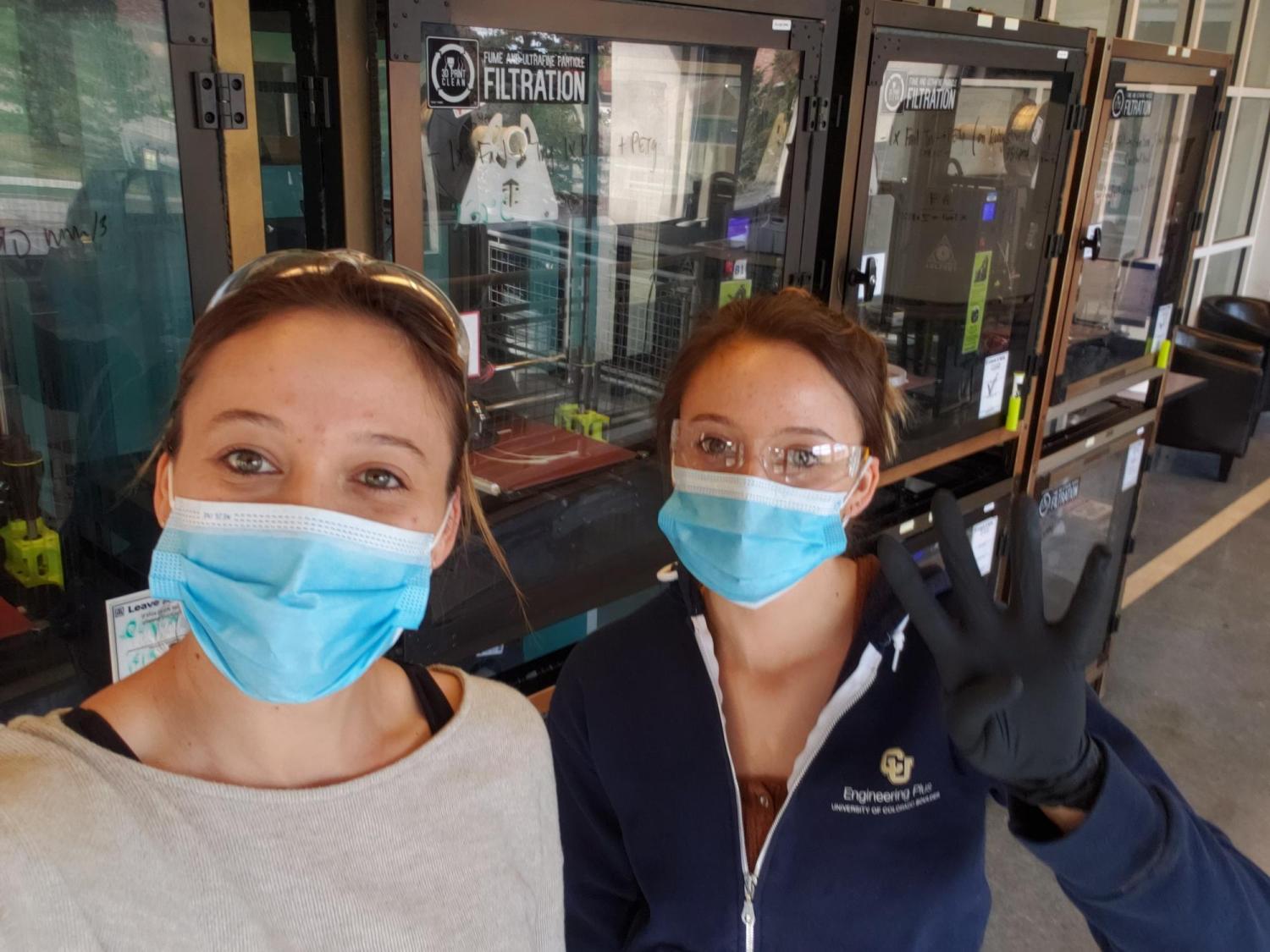 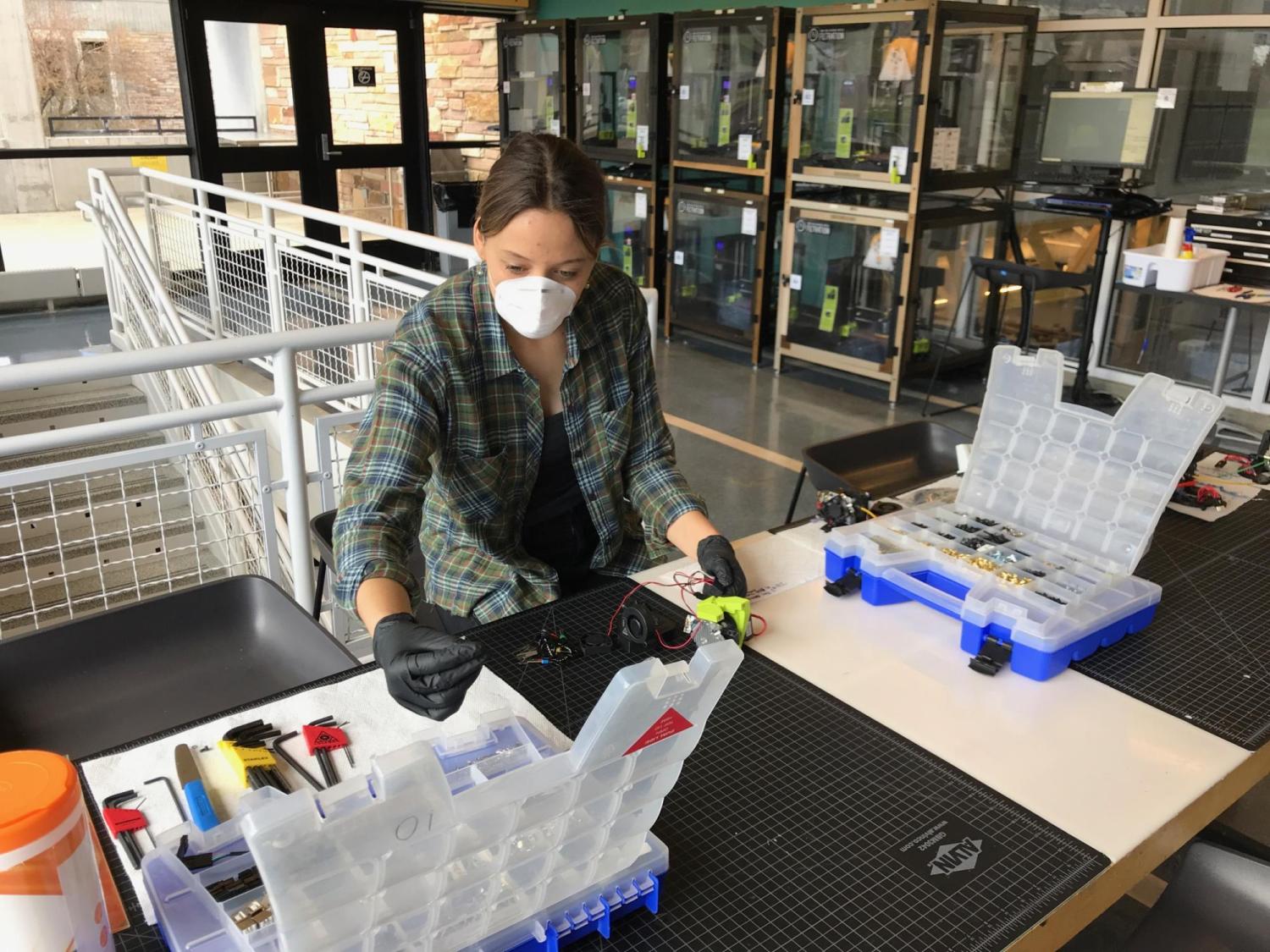 Byron Rudisill, a lab engineer at CU Boulder, did the same for the six printers in a second lab called the Idea Forge. Jeff Allen, a lab manager for the Creative Labs Center, is operating six printers. The overall CU Boulder printing effort is being overseen by Daria Kotys-Schwartz and Becky Komarek at the Idea Forge. Once all of the kinks are worked out, the three labs together should be able to churn out about 100 face shield bands per day.

The volunteers have already made their first shipment. An outside team is using laser cutters to make the plastic shields themselves—and then it’s on to hospitals around the state. CU Science Discovery and the ATLAS Institute are similarly using their 3D printers to make the bands for face shields, and other campus labs may soon join the push.

“I’ll run a print and work on some homework. Then, when I’m finished, I’ll run another print,” she said.

Sharpe, who will start work as a full-time engineer at ITLL in the summer, added that she and her sister have made keeping themselves and others safe a top priority.

Before printing a single band, the duo spent a day decontaminating their lab, which only they are currently using. They also follow strict sanitation protocols to limit the chances that they might accidentally contaminate their products.

Many of those procedures were developed and tested by teams at Inworks, an initiative based at CU Denver and the CU Anschutz Medical Campus. The program, which is co-led by CU Boulder alumna Kate Goodman, has been designing and making tools for the medical community for years.

The make4covid team is thinking beyond face shields, too, and has been brainstorming ways to create and test other types of PPE.

For now, Borden is excited to see many of the university’s 3D printers back online.

“One of the amazing things about being part of a world-class research institution is that we have people who can make things, get things to work,” Borden said. “We can use that in a crisis.”

And it’s led to a whole new type of conversation on Rachel and Lauren Sharpe’s walks.

“We walk home, and we talk about how grateful we are to get involved in something like this,” Rachel Sharpe said.

What happens when an expert on natural language processing asks a chatbot to write a children's book in the style of Dr. Seuss? Professor Kai Larsen put the question to the test. END_OF_DOCUMENT_TOKEN_TO_BE_REPLACED

A model of your very own kidney made entirely from soft and pliable polymers? Researchers at two CU campuses are on the cusp of 3D printing realistic replicas of human anatomy. END_OF_DOCUMENT_TOKEN_TO_BE_REPLACED

For people who are blind or visually impaired, finding the right products in a crowded grocery store can be difficult without help. A team of computer scientists at CU Boulder is trying to change that. END_OF_DOCUMENT_TOKEN_TO_BE_REPLACED
Return to the top of the page