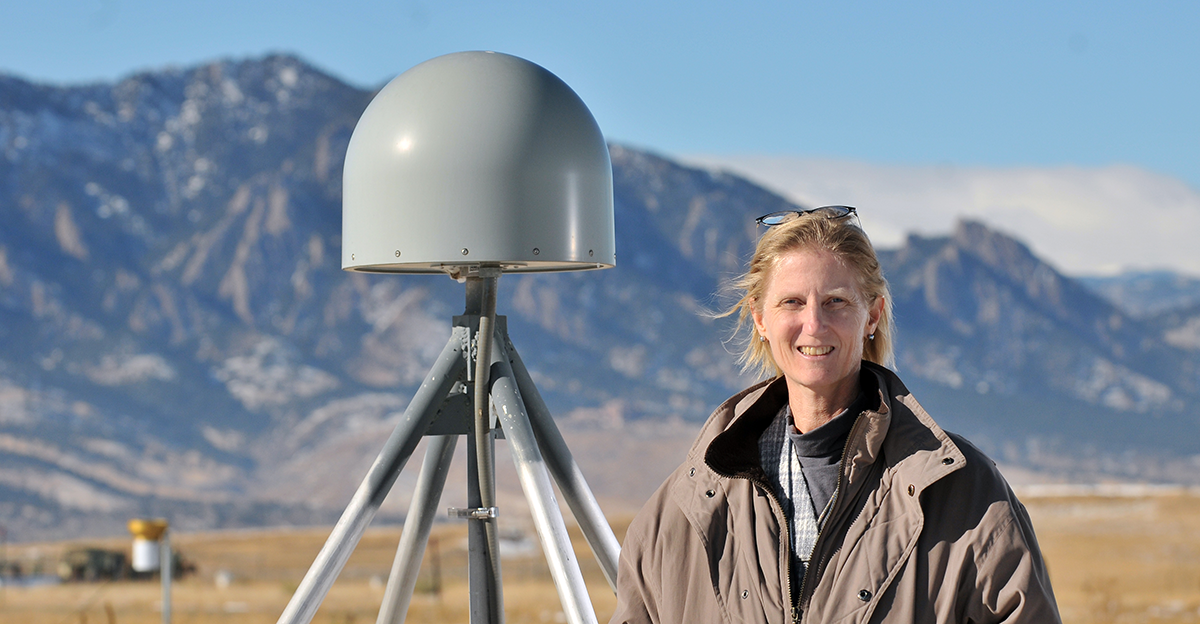 Kristine M. Larson of the Ann and H.J. Smead Department of Aerospace Engineering Sciences will deliver a Distinguished Research Lecture about traditional and leading-edge applications of Global Positioning System (GPS) at 4 p.m. on Wednesday, Dec. 5. The talk will be held in the Glenn Miller Ballroom at the University Memorial Center and a reception will follow.

Larson and William M. Lewis Jr. of the Ecology and Evolutionary Biology department were selected to receive the 2018 Distinguished Research Lectureship, which is among the most esteemed honors bestowed by the faculty upon a faculty member at the University of Colorado Boulder. Lewis' talk will be held on April 30.

Professor Larson's talk: GPS Can't Do That, Can It?

In this talk, Professor Larson will summarize the “traditional” applications of GPS in geosciences as well as the new environmental applications her group has developed.

For many people, the Global Positioning System (GPS) is just one of those gadgets in a smart phone that makes our lives a little easier. Much less known to the general public is the way that GPS has revolutionized the geosciences.

For decades, models have been able to predict how plate tectonics changes the surface of the Earth, but only with GPS have we been able to accurately measure these changes anywhere and anytime. Professor Kristine Larson’s career has coincided with this GPS revolution.

Early on, Larson used GPS to measure fault motions in California. Then, about 15 years ago, she began working on something GPS wasn’t supposed to be able to do­–measuring how the ground is moving during an earthquake, when the ground is literally breaking apart.

In trying to convert a system designed to measure slow tectonic speeds into a seismometer, she found herself spending most of her time trying to model the effects of reflected GPS signals so they wouldn’t contaminate GPS seismic records. However, intrinsically, these reflections provide information about the surface beneath the GPS antenna (i.e. how much snow there is, whether the soil is wet or dry).

Larson received a BA in Engineering Sciences from Harvard University in 1985 and a PhD in Geophysics from Scripps Institution of Oceanography, U.C. San Diego in 1990.

Her dissertation was one of the first to use the Global Positioning System (GPS) to measure the motions of faults in southern California. She became an aerospace engineering professor at CU Boulder in 1990. With her CU Boulder colleagues, she has worked on a diverse set of GPS research projects, such as measuring deformation across the Nepal Himalaya, synchronizing atomic clocks and assessing the variability of Greenland ice sheet speeds.

Her research on using GPS to measure seismic waves ultimately led to the development of GPS Interferometric Reflectometry (GPS-IR). In this new technique, GPS signals that bounce on the surface below a GPS antenna are reverse engineered to provide measurements of soil moisture, snow accumulation, vegetation water content and tides.

In 2014, her research group received the Prince Sultan Bin Abdulaziz International Water Prize for Creativity. She is a Fellow of the American Geophysical Union and was the European Geophysical Union Huygens Medalist in 2015. Last year she received an Honorary Doctorate from Chalmers University of Technology and an Alexander von Humboldt Foundation Research Award.